The Military Department of Indiana Ceremonial Unit provides military honors at funeral services for active or retired members of the Indiana National Guard. The CU also supports other public and military events, including ceremonies, parades, sporting events and flag raising, and will provide anthem singers to events upon request.

Established in 1974, the MDI Ceremonial Unit was the first such unit of its kind in any state. Current and prior members of the Indiana National Guard who are in good standing may volunteer to serve in the CU to represent the Guard at funeral services and public events near their current unit or station. CU members train to work in one of eight teams, including the color guard, music section, caisson platoon, firing party and more.

Military Department of Indiana Ceremonial Unit members select three teams of interest and train in those areas. Each team requires a different level of training, but members typically participate in two collective training events per year.

While the final salute is given, 30-50 yards from the gravesite, a lone bugler plays Taps. Full honor funerals include bugler, drummer and support from the 38th ID Band. The music section also provides singers for other ceremonies and events.

The caisson platoon renders final honors in one of the oldest and most evocative military traditions—a riderless (caparisoned) horse led behind the caisson. The caisson platoon also provides mounted color guard and static displays for ceremonies, events and special requests.

The firing party supports all military funerals and memorials, and serves as an escort platoon during full and special full honors and funerals. The firing party fires a blank-cartridge, three-volley salute into the air. The three-volley salute is a practice derived from traditional battlefield cease-fires when three shots were fired to signal that fighting could resume once the dead and wounded were removed from the battlefield.

The protocol team works with the family of the fallen and with the casualty assistance officer to provide planning and oversight of a military funeral, including usher, escort and traffic control support. The protocol officer/non-commissioned officer presents the folded flag to the family on behalf of the president of the United States.

Upon request from next-of-kin or Ceremonial Unit members, the military chaplain provides spiritual and pastoral support for family members and conducts religious services at all types of military funerals.

Honor guards act in a ceremonial role over the remains, and as pallbearers. They perform the ceremonial folding and presentation of the U.S. flag to next-of-kin, and the playing of Taps. Supports honors, full and special full honors military funerals.

Current or prior members of the Indiana National Guard who are in good standing may apply to volunteer in the Ceremonial Unit. You’ll have the opportunity to represent the Guard at funeral services and public events near your current unit or station, and you’ll be challenged both to learn something new and to share your knowledge and expertise with like-minded soldiers and airmen. To maintain your active status, we ask that you participate in a minimum of four events per year. Your participation will allow you to earn the Ceremonial Unit badge to wear on your dress uniform and to attend the annual awards banquet. Contact our office at 317-247-3300, Ext. 85466 with any questions. 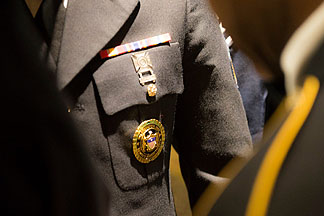