A roundabout is a circular intersection or junction in which road traffic flows almost continuously in one direction around a central island.

Roundabouts have been successfully used to reduce congestion in residential neighborhoods and are accepted as one of the safest types of intersection designs.

Roundabouts are becoming a relatively common traffic feature in Indiana, with more than 256 constructed through 2016 by both INDOT and cities and towns. More than a dozen additional roundabouts are currently being planned by INDOT.

All modern roundabouts share the same features. These include:

Traffic circles have been part of the transportation system in the United States since at least 1905 when one of the first circles was built in New York City. Subsequently, many large circles or rotaries were built in the United States. The prevailing designs enabled high-speed merging and weaving of vehicles. Priority was given to entering vehicles, facilitating high-speed entries. High numbers of crashes and congestion in the circles led to rotaries falling out of favor in America after the mid-1950s. 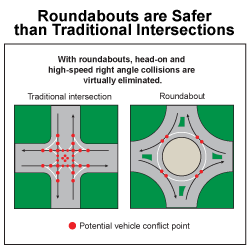 There are an estimated 300,000 signalized intersections in the United States, according to the Federal Highway Administration. About one-third of all intersection fatalities occur at these locations, resulting in roughly 2,300 people killed each year. Furthermore, about 700 people are killed annually in red-light running collisions.

Roundabouts have demonstrated substantial safety and operational benefits compared to most other intersection forms and controls, with especially significant reductions in fatal and injury crashes.

Because the only movement allowed upon entry or exit from a roundabout is a right turn, the occurrence of crashes that result in injury is substantially reduced. Small-angle collisions, the type of collisions that can occur as a result of a right-hand turn, are typically less severe than other types of collisions.

How to Drive a Roundabout

Roundabouts can easily accommodate emergency and large-sized vehicles. Drivers should behave in the same manner as they would on any other road if an emergency vehicle approaches: carefully move as far right as possible and, if necessary, stop until the emergency vehicle passes.

Benefits of a Roundabout