With one successful project in the books, INDOT is ready to test Ultra-High Performance Concrete (UHPC) for a second time.

UHPC features a discontinuous pore structure that reduces liquid ingress, significantly enhancing its durability. Traditional concrete has a compression strength of 4,000 to 10,000 pounds per square inch (psi), but UHPC can reach over 14,000 psi in four days and over 21,000 psi in 28 days. Structural fiber reinforcement in UHPC enables it to resist post-cracking stresses.

In July 2021, INDOT built a new U.S. 52 bridge over Mud Creek in Rush County. The new three-span bridge, which replaced a structure built in 1955, marked INDOT’s first foray into UHPC, a product commercially available in the United States since 2000. For the project, the contractor selected Next Generation UHPC 2.0, which entered the U.S. market in 2020.

UHPC enabled designers to design smaller than conventional bridge joints. Normally, designers would need to lap several feet of reinforcing through the joints, but on Mud Creek, they did it in inches.

The next use of UHPC will also be in a rural location, on U.S. 33 over the Blue River, 3½ miles north of State Road 205 in Whitley County. Letting will be in December, with construction expected to start in April 2023.

“Because of the fast accelerated bridge construction (ABC) method, the superstructure units and substructure will need to be structurally connected with UHPC, which cures quickly and is of high strength,” said Bridge Engineering Team Leader Mahmoud Hailat. “UHPC also will accommodate the smaller reinforcing steel splice.”

Senior Bridge Engineer Cheryl Folz, who helped review plans of the U.S. 52 project, added: “ABC is one tool that we can use to help keep our work zones safer by reducing duration of the construction. UHPC is a material that can be used on ABC projects like U.S. 52 and U.S. 33 because of the faster cure times and smaller closure pours that it allows. Because UHPC is expensive and labor intensive, we are trying to learn as much as we can from projects like the two of these on how we can best use it on future projects.” 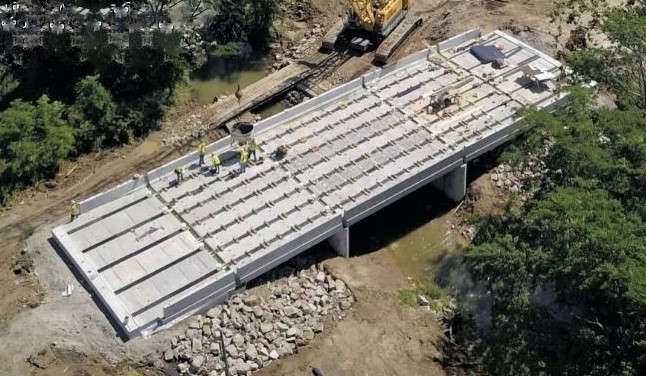