Chip seal or seal coat projects treat the pavement surface with liquid asphalt material covered by crushed stone to provide a new roadway surface and prevent future deterioration. It can be performed using in-house crews and equipment and is INDOT’s most 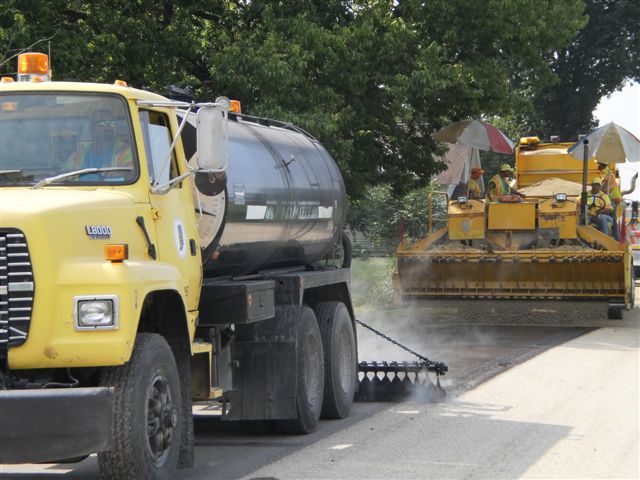 Chip sealing treats roadway pavement at the optimal time to maximize its useful life. Chip sealing will typically extend the life of the roadway surface for three to five years. Prior to chip sealing, the pavement should show no major deficiencies and isolated deficiencies should be repaired. A surface may be chip-sealed multiple times, as long as the road is structurally sound.

Chip sealing provides waterproofing, crack sealing and improved traction. After years of traffic and winter freeze-thaw cycles, small cracks develop in roadway pavement. If left untreated, moisture seeps into these cracks and forms potholes when the water freezes and expands. As the name implies, a chip-seal treatment seals cracks and helps prevent potholes from developing.

INDOT chooses roads for chip seal pavement preservation based on their surface type, condition, age, and traffic volume. INDOT pavement engineers review the candidate roads and prioritize according to need, safety and funding.

The cost for a chip seal is typically a little more than $1 per square yard, far less than the $3 to $9 per square yard for other pavement preservation treatments and resurfacing projects. The American Association of State Highway and Transportation Officials (AASHTO) reports that for every dollar invested in extending roadway life through pavement preservation, $6 to $14 is saved in future roadway rehabilitation and construction costs.

Besides cost savings, other benefits of chip sealing are:

1. Setting chips in an asphalt blend. The mixture must then set or cure for at least one hour before traffic can be returned to the roadway.

2. Loose stone is swept off the roadway. Maintenance crews will take measures to minimize the dust throughout this area during the process.

3. Occasionally, INDOT will apply a fog seal following the chip sealing application. Fog sealing is a light layer of asphalt over the stone to help lock it in and also reduce dust.

4. Once all applications of chip seal and fog seal have been completed, traffic crews will install permanent pavement markings for the roadway. Note: Fog sealing also allows pavement markings to be more prominent.

INDOT makes every effort to reduce vehicle damage during and immediately after chip seal projects. While these efforts may not prevent all damage to vehicles during the chip seal process, they have substantially reduced the likelihood of damage.

INDOT safety efforts include posting reduced speeds in work zones; closing roadways or lanes during chip seal projects; and sweeping the roadway during the chip seal process and after project completion to eliminate loose stones.

Motorists can also work to protect their vehicles when driving through chip seal project areas: