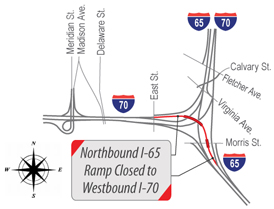 INDOT closed the northbound Interstate 65 ramp to westbound I-70, southeast of downtown Indianapolis, on Wednesday, May 27, 2015 for approximately two months. During the closure, INDOT contractors rehabilitated two ramp bridges that were built more than 40 years ago:

The rehabilitation project modernized the two structures with improved quality and safety standards by:

INDOT awarded a design-build contract to Milestone Contractors, the same company that built the South Split project in 2013, for $3.44 million. This project is part of a targeted effort to invest an additional $50 million in state funds to protect and preserve approximately 80 of Indiana’s bridges this year. Recent customer surveys found that one of Hoosiers’ top priorities for INDOT is maintaining our existing roads and bridges.

News media, social media and regular email updates will be used to keep the publi

c informed every step of the way and throughout the project. Social media users should “like” the Indiana Department of Transportation: East Central on Facebook and follow @INDOT_ECentral on Twitter for updates using #SouthSplit.

The current South Split project is the second recent one involving the I-65/I-70 interchange area in downtown Indianapolis.

The first I-65/I-70 South Split Project on the east side of downtown Indianapolis was essentially completed in October 2013. The East Street bridge over I-70 opened to four lanes of traffic in October 2014 after a six-month deck reconstruction project that increased the clearance over the interstate by more than a foot.

Raising the East Street Bridge was the final component of a project to increase clearances on eight bridges over I-65/I-70 in downtown Indianapolis. In Fall 2013, the pavement beneath seven South Split bridges was reconstructed and lowered to allow for increased bridge clearances and reduced potential for collisions from unpermitted and off-route trucks with oversize and unsecure loads. Since the lowered pavement was opened to traffic in October 2013, to date there have been no such bridge strikes.