INDOT marked its 100th anniversary in July 2019, an anniversary milestone that celebrated the 1919 awarding of the first state highway contracts by the Indiana State Highway Commission, the predecessor to the Indiana Department of Transportation.

Driving on Indiana’s roads and highways today, it’s hard to imagine a landscape in which days were often required to travel between Hoosier towns. For decades before and after Indiana became a state in 1816, dirt paths cut through the forest were the only routes easily followed and travel was dangerous and slow. Often these paths were old Native American or American Bison trails used for hundreds of years as the buffalo migrated and native hunters followed.

The first long-distance roads in Indiana developed along these established routes and trails, which helped to facilitate American settlement. Many of these trails became major overland routes, and helped shape the history of Indiana. 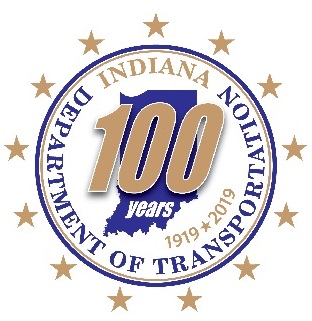 Outside the cities, the nation's bad roads made bicycling a laborious, dangerous process. As one contemporary slogan put it, the roads were, "Wholly unclassable, almost impassable, scarcely jackassable!" Bicycle groups worked at the federal, state, and local level to secure road improvement legislation.

In response to the national need for road improvement, the federal government in 1883 created a new Office of Road Inquiry (ORI), the first predecessor to today’s Federal Highway Administration.

By 1914, the growth in automobile travel had increased pressure on the federal government to provide funds for road building outside of federal reserves. In July 1916, President Woodrow Wilson signed the Federal Highway Act into law. The act authorized states to create highway commissions to oversee road improvements and established the modern federal-state road-building partnership.

The Federal Highway Act of 1917 authorized the states to create a new state highway commission. The Indiana General Assembly took the first step toward establishing a state highway commission in March 1917; however, the constitutionality of that act was challenged. By the time the 1917 Highway Act was ruled constitutional by the Indiana Supreme Court in January 1919, the State Legislature had repealed the original 1917 Act and replaced it with another that became law on March 10, 1919. The creation and operation of the present state highway system began with the Indiana State Highway Commission, which was created by the 1919 Act.

The first letting of the Indiana State Highway Commission for construction of state highways was held on July 15, 1919, at which time bids were received for 13 projects. In the afternoon session, the commission awarded five of these Federal Act projects:

INDOT is responsible for building and maintaining interstate highways, U.S. routes, and state roads in Indiana. The agency administers federal highway funds provided to cities, towns and counties, and supports and provides financial assistance to public transit systems, freight and passenger rail and port facilities. INDOT also encourages and assists in the development of airports, landing fields, and other aviation navigation facilities.