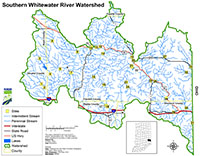 A preliminary survey of the Southern Whitewater River Watershed was conducted by Indiana Department of Environmental Management (IDEM) in 2007 through the probabilistic sampling program. Impairments include dissolved oxygen, E. coli, and PCB and total mercury in fish tissue. Potential pollution sources in the watershed include nonpoint sources from forested lands and pastures, land application of manure and urban and rural run-off, as well as point sources from straight pipe discharges, and home sewage treatment system disposal.

IDEM completed a comprehensive sampling program in the watershed that was based on the current impairments. A total of 33 sites were assessed for general chemistry, nutrients, habitat, fish and macroinvertebrate communities, and stream flow. For a comprehensive list of all parameters please reference the approved work plan.

A Draft TMDL meeting was held at the Franklin County Government Center- Commissioners Room; 1010 Franklin Ave. Brookville, IN at 2:00 PM and Batesville Middle School- Commons; 201 Mulberry St. Batesville IN 6:00 PM on August 6, 2015 during which IDEM described the TMDL program and provided an overview of the draft TMDL results. A representative from the Whitewater River Watershed Project also provided information on current and future activities.

Subsequent to its approval, inaccuracies in the final report were discovered by IDEM, who informed U.S. EPA in December 2017. IDEM explained that it had mischaracterized how bacteria TMDLs in the final Southern Whitewater River Watershed TMDL report were calculated. A memorandum from IDEM and revised decision document from U.S. EPA were issued as a result.

Additionally, an error in the total phosphorus WLA calculations for facilities in the watershed was discovered. As a result, IDEM recalculated the WLAs in error and provided a revised report. A public notice for the revision ran from February 5, 2020 to March 6, 2020. U.S. EPA approved the revisions on March 26, 2020.