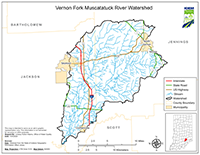 IDEM has conducted numerous surveys of the Vernon Fork Muscatatuck River watershed, dating as far back as 1992 with sampling on Crosley Lake. Fixed station monitoring has been conducted in the watershed since 1998. More extensive surveys of the watershed were conducted in 1993, 1997, 2002-2007, 2013, 2016, and 2017 by the probabilistic, targeted, and fish tissue monitoring programs in varying years. This includes two studies in cooperation with the U.S. Fish and Wildlife Service. Impairments in the watershed include E. coli, dissolved oxygen (DO), biological communities, and mercury (for fish tissue). Potential pollution sources in the watershed include nonpoint sources from agricultural lands and pastures, rural run-off, wildlife, as well as point sources from straight pipe discharges and home sewage treatment systems.

IDEM completed a comprehensive sampling program in the watershed that was based on the current impairments. A total of 23 sites was assessed for general chemistry, nutrients, habitat, and fish and macroinvertebrate communities. A comprehensive list of all parameters is referenced in the approved work plan. The final TMDL report addresses E. coli, biological communities (IBC), and low dissolved oxygen (DO) impairments in the watershed.

A TMDL final public meeting was held on July 14, 2022 at 10:00 AM (EST) at the Jennings County Public Library to present the findings of the draft TMDL report and answer any questions.

A virtual public kickoff meeting was held to introduce the project and solicit input on October 27, 2020 at 2:00 PM (EST).

A 30-day public comment period for the draft final TMDL report occurred from July 15, 2022 through August 15, 2022. No comments were received.