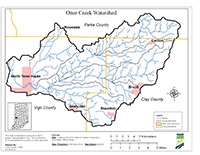 TMDLs for the Otter Creek watershed are established for Escherichia coli bacteria (E. coli) and addressed 23 impairments. Some of the recommended solutions to address the impairments include storm water controls, point source controls, manure management, and habitat improvements.

A public kickoff meeting was held to introduce the project and solicit input on January 17, 2011 at the Vigo County Annex, 127 Oak Street, Terre Haute, IN, 47807.

A draft TMDL public meeting was held on June 4, 2013 in Terre Haute, IN at the Vigo County Annex.

Subsequent to its approval, inaccuracies in the final report were discovered by IDEM, who informed U.S. EPA in December 2017. IDEM explained that it had mischaracterized how bacteria TMDLs in the final Otter Creek Watershed TMDL report were calculated. A memorandum from IDEM and revised decision document from U.S. EPA were issued as a result.