Scheduled ImageTrend Outage: The ImageTrend system will be unavailable due to routine maintenance from 10 p.m. to midnight on September 28 (Wednesday).

About the State Fire Marshal

The Indiana State Fire Marshal is a governor-appointed position that also serves as the director of the IDHS Division of Fire and Building Safety.

The governor appointed Stephen Jones as state fire marshal in 2022. Learn more about him 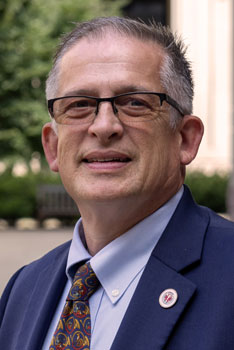 Gov. Holcomb appointed Stephen Jones, formerly of the Brownsburg Fire Territory, as the new Indiana State Fire Marshal in August. He had been the local fire marshal since 2013 and now joins IDHS with more than 30 years of experience in the fire service as a firefighter/EMT and various other roles. In this new position, he pledges to support Hoosier first responder families and ensure his staff members provide everything needed to help responders to be prepared for service. Watch his video introduction

IDHS and the Indiana Department of Environmental Management (IDEM) are continuing to collect and dispose of Per- and Polyfluoroalkyl (PFAS) foam from Indiana fire agencies. Departments still have time to sign up for this free disposal service. Read about the initiative and contact firemarshal@dhs.in.gov with questions.

Discover training and certification updates for fire, EMS and emergency personnel (and more).

Find where deaths have occurred in residential fires statewide.

Go to the ImageTrend Reporting page to learn how fire and EMS agencies report data to the state.

Visit the Get Alarmed page to learn about fire safety or to report smoke alarm installations.

For first responders: Get immediate help or resources on stress, depression, addiction and more.

Nominate a public safety worker for recognition from the State Fire Marshal or the EMS Section.