The Pursuit of Public Enemy #1

In the 1920’s and early 30’s our nation was struggling with the Great Depression and was divided over prohibition.  Along with that, gangsters were making news headlines.  Names like Machine Gun Kelly, Baby Face Nelson, Al Capone, and Bonnie and Clyde made headlines in local newspapers daily.  Indiana was not immune from these criminals and their merciless acts.  In fact, a native son by the name of John Dillinger was making a name for himself.  Born June 22, 1903 in Indianapolis and raised in Mooresville, John Dillinger became one of the most notorious gangsters of his day.  In 1921 he was caught stealing a car in Indianapolis.  After escaping capture on foot, he later joined the U.S. Navy only to desert a few months later in December of 1923.  After being arrested in 1924 for attempted robbery and assault with a deadly weapon, Dillinger was sentenced to 10-20 years in prison only to be paroled in 1933.

After getting parole, it didn’t take long to hook up with some old prison mates and begin to earn his title as “gangster.”  Over the next 12-15 months Dillinger’s exploits would eventually earn him the title of Public Enemy #1.  Most of his crimes were committed in the Midwest including his home state of Indiana.  A new police department by the name of the Indiana State Police would pursue Dillinger throughout the state of Indiana and even across state lines before Dillinger would eventually be gunned down in Chicago, IL in 1934.

Indiana State Police Superintendent Al Feeney had no law enforcement background and appointed Captain Matt Leach to head up the Indiana State Police in their pursuit of Dillinger.  Leach, who had worked for many years as an officer with the Gary, IN Police Department, first became aware of Dillinger in the summer of 1933 after Dillinger began robbing Indiana banks.

Over the next several months Dillinger would taunt Leach.  Dillinger made phone calls to Leach including one call saying, “You almost surprised me in Gary, gumshoe.  Nice try.”  Dillinger even sent him a book once entitled, “How to be a Detective.”  Despite all the taunting, Leach continued his relentless pursuit of Dillinger and his gang.

After the capture of Dillinger in Arizona, Leach flew to Tucson to escort Dillinger back to Indiana. He was to be held at the Lake County Jail in Crown Point, IN.  Despite Leach’s urging to hold Dillinger in the more secure state prison in nearby Michigan City, Lake County officials declared their jail to be “escape proof.”  Although there is not an exact historical confirmation, it was Dillinger’s escape from the Lake County Jail that was said to have been accomplished when he carved a gun from a piece of wood and threatened the guards into letting him out.  It was after this escape Indiana State Police intensified their efforts in their pursuit of Dillinger.

Indiana State Police efforts to capture Dillinger and his gang members remained a top priority.  The pursuit of Dillinger had already resulted in the death of Eugene Teague, the first Indiana trooper killed in the line of duty in December 1933.  Teague was killed in Paris, IL when Illinois and Indiana police staked out a hotel after receiving a tip Dillinger gang member Edward Shouse was meeting accomplices there to plan a bank robbery.

One of the first Indiana troopers, George Daugherty recalled the hunt for Dillinger in a 1976 article in the Anderson Sunday Herald.  According to Daugherty, the lack of manpower, a shortage of effective equipment, and no communications in vehicles made the hunt for Dillinger a nightmare.  Daugherty says they (Indiana State Police) never got a day off.  The Chicago Worlds Fair was going on at the time and troopers were covering six or seven counties at once.  They were inundated with calls from people saying they had spotted Dillinger.  Although nine out of ten calls were false, they still had to follow up on them according to Daugherty.  Daugherty even commented that his involvement in the Dillinger case didn’t even end with Dillinger’s death.  He said he was among a contingency of troopers assigned to the security detail at Dillinger’s funeral. 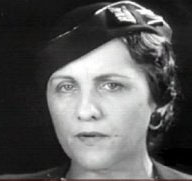 The pursuit of John Dillinger ended in 1934 in Chicago.  Dillinger was set up by Anna Sage, a Romanian immigrant facing deportation.  She struck a deal with the FBI and agreed to help them capture Dillinger.  On July 22, 1934 she and Dillinger would travel to the Biograph Theater to see Clark Gable and William Powell in the movie Manhattan Melodrama.  Since Dillinger had undergone plastic surgery, FBI agents weren’t sure they would be able to recognize him.  Sage would be with Dillinger when they exited the theater so he could be identified.  Sage was wearing an orange dress but in the lights outside the theater it looked red thus earning her the moniker, the “Lady in Red.”  When FBI agents approached Dillinger from behind he spotted them and began to run as he reached into his pocket to retrieve his gun.  The agents opened fire killing Dillinger.

While the Indiana State Police were not responsible for the final apprehension of Dillinger, their exhaustive efforts in pursuit of Public Enemy #1 is but just one chapter in that of their long and distinctive 75 year history.