The post WW II years saw an economic boost in the United States. Factories were producing and the automobile industry was booming. This economic progress caused a need for larger and heavier trucks to haul our nation’s products. Prior to 1950 Indiana police officers had the authority to enforce the rules of the road on all vehicles including big trucks. However, there was little else that could be done to regulate what was being transported to and from Indiana on commercial vehicles. 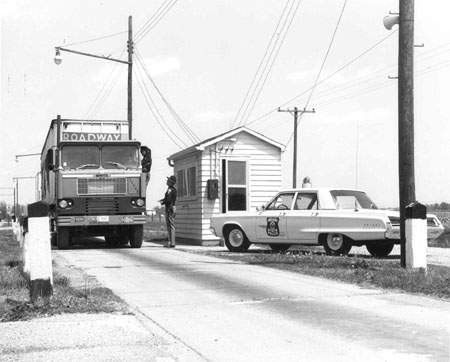 In 1951 the Indiana Legislature approved the Indiana State Police to hire 25 troopers specifically to enforce laws that regulate height, weight, length, and width on commercial vehicles traveling Hoosier roadways. Unfortunately, the many other duties required of the state police prohibited the strict enforcement of these laws and regulations. Those troopers specifically hired for truck enforcement often found themselves busy responding to crashes and other calls that took priority over the enforcement of truck laws.

In the early 1950’s, through the Public Service Commission and state highway funds, enough revenue was generated to hire civilians to assist state troopers with truck enforcement duties. In August, 1953 the Indiana State Police hired 22 civilian weigh clerks to replace the original 25 troopers assigned to truck enforcement duties. Police officers assigned to the Public Service Commission detail were assigned to supervise the weigh clerks at permanent scale locations. Four additional officers were then assigned as field supervisors in the truck weigh detail. The name given to the newly created detail was Motor Carrier Inspection. 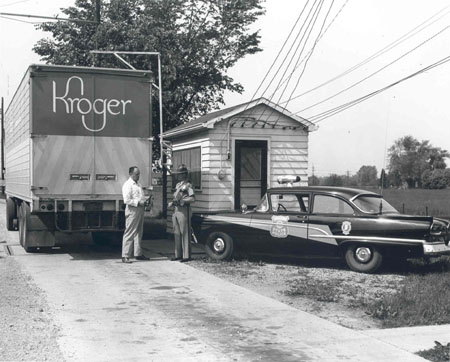 In those early years the weigh clerks had no law enforcement authority. They were civilian employees who were assigned to work with troopers. They operated the portable scales, manned the permanent scale facilities, and would do the physical inspections of the trucks which often involved crawling under them as well as other duties. The weigh clerks filled out all the reports and arrest ticket information when necessary. The trooper then checked the reports and tickets for accuracy, signed, and then filed them.

As the truck weigh detail began to grow, it expanded into a “division” and included a division commander, three section commanders, and 22 specialists assigned to 19 districts along with additional support personnel.

It wasn’t until 1952 the first permanent weigh stations were built. They were small 8x10 buildings located on what was then considered primary roads, but by today’s standards, would be considered secondary roads. The buildings were heated with kerosene heaters and had no air-conditioning. A platform scale was installed and worked similar to a bathroom scale. As a truck would cross the scale, one axle at a time was weighed not only to determine the weight on each axle but the sum of these weights equaled the gross weight of the vehicle. These scales stayed in use for many years when the last one, located on U.S. 6 in northern Indiana, finally closed in October of 1997. 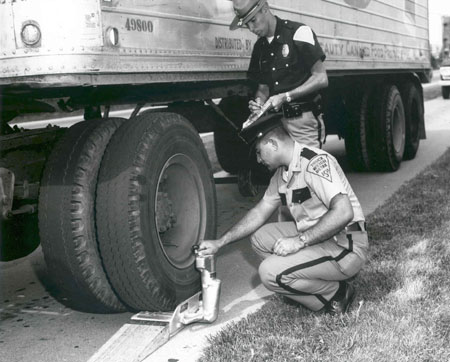 Motor Carrier Inspection operated in this manner for over 20 years when around 1975 their titles were changed from weigh clerk to “weigh master” but they still had no law enforcement authority. According to Larry Andress, retired ISP Motor Carrier Inspector, that same year the legislature sent out questionnaires to all weigh masters to determine if they could perform their duties without the constant supervision of a trooper. Andress went on to say this was not viewed favorably by the Indiana State Police command staff. In fact, he said, “We were all told when we were finished with the questionnaire, we were to turn it into the post and it would be forwarded for us. Myself and Dale Horine told our superior we had already mailed ours in.” According to Andress, only those two questionnaires made it to the legislature. Despite the apparent lack of response to the questionnaires, later in 1975 weigh masters were finally given “limited” law enforcement authority and sent to the academy for three weeks of training. Following that training they were authorized to enforce state and federal laws as they related to weights and dimensions of commercial trucks, permits, and other aspects related to all commercial vehicles. While they now had limited law enforcement authority, their immediate supervisors were still troopers. 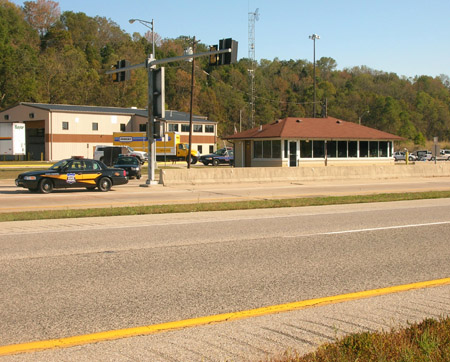 It was about 1987 when their titles changed again; this time from weigh master to motor carrier inspector (MCI). Along with this came promotion opportunities. No longer under the supervision of a trooper, a “working leader” was promoted from the MCI’s at each district to supervise the other MCI’s assigned to that district. Later the title of working leader was changed to “district coordinator.” Today there are various other supervisory positions within the Commercial Vehicle Enforcement Division (CVED) and more opportunity for advancement within the ranks of Motor Carrier Inspectors. 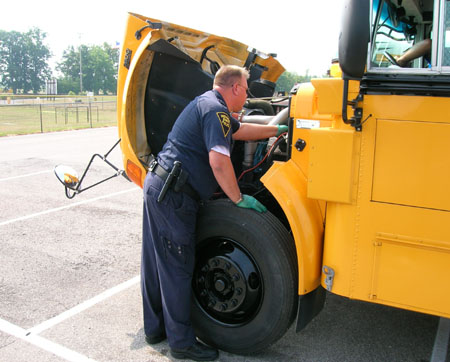 Since 1953 when those first 22 weigh clerks were hired to assist troopers with the enforcement of commercial vehicle laws, the division has grown into a very large operation with even greater responsibility. Today the responsibility of CVED entails far more than just enforcement of weights and dimensions of commercial trucks. CVED is responsible for enforcing all state and federal regulations pertaining to commercial motor vehicles operating in the state. It is also responsible for conducting and managing Indiana’s school bus inspection program, safety audits of motor carriers, and enforcing Indiana’s dyed fuel laws. To meet these additional responsibilities, CVED is commanded by a major and today the division includes approximately 33 sworn personnel, 90 Motor Carrier Inspectors, and four civilian support staff.

*NOTE-The source for portions of the above historical information: Gangsters, Gunfire, and Political Intrigue: The History of the Indiana State Police by Marilyn Olsen.