Back in 1933 the first troopers patrolled on motorcycles. After the first Indiana State Troopers finished their initial “training” they were told to go Muncie where they picked up either a Harley Davidson or Indian motorcycle. The average trooper in the early 1930’s might patrol over 100,000 miles per year on a motorcycle on mostly unpaved, unpredictable roads in all kinds of weather. This went on until the mid or late 1930’s when the first Indiana State Police cars were introduced. 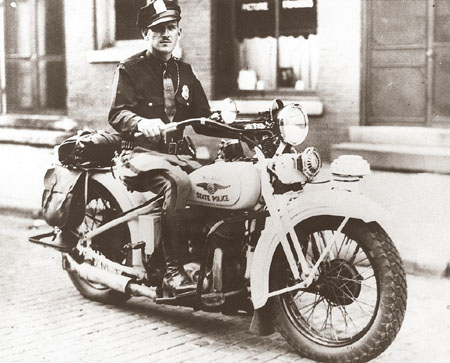 The first “known” ISP vehicles were the 1935 Auburn Phaeton and the 1936 Cord. In 1937 the Indiana State Police drove two-door Chevrolets and the motorcycle continued as a part of the ISP automotive fleet. During World War II it was almost as difficult for the state police to obtain cars as it was for the general public. From the late 1930’s until after WWII the Indiana State Police drove a variety of makes and models of cars. Whatever was available for their use was put into service. 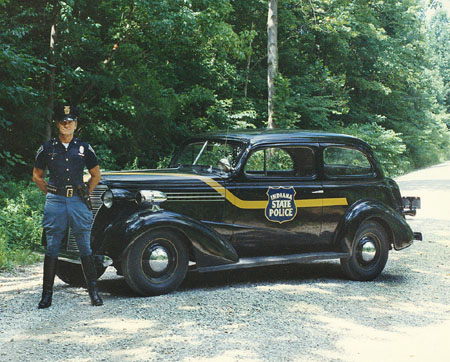 After WWII there was significant increase in traffic on America’s roadways. The soldiers and sailors were returning from the war and the economic increase meant more cars on the roads and increased speeds. It wasn’t until the 1950’s the Indiana State Police began to use what was considered a “real” police car. Equipped with four barrel carburetors, six and eight cylinder engines, heavy duty shocks and brakes, and larger tires, they could catch about anything on the road. In 1956 they began testing cars with automatic transmissions and up until that point, the cars were black. It was in 1956 when cars of assorted colors were purchased for investigators.

For about the first thirty years or so the Indiana State Police purchased a variety of makes and models of automobile each year. During these years one might see troopers in Fords, Chevrolets, or Dodges of the same model year. In 1967 ISP began purchasing primarily one make of vehicle per model year. Specifications outlining what equipment was desired on a patrol car were put out for bid and the company submitting the lowest bid received the order for that year. Over the last 35 or 40 years the Indiana State Police have driven a variety of makes of cars including Dodges, Chryslers, Plymouths, Chevrolets and since 1994 the Ford Crown Victoria. 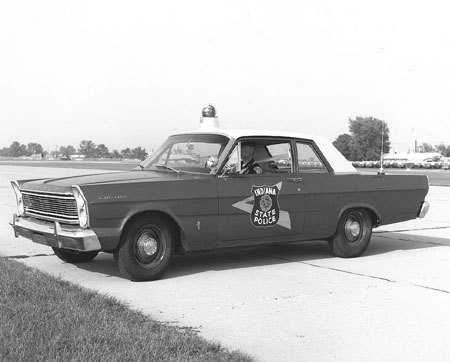 While motorcycles were the first mode of transportation for the Indiana State Police, they were phased out in the late 1930’s and were merely a part of ISP history. However, in 2003 the Indiana State Police reintroduced motorcycles back into its fleet for the first time in about 65 years. Today there are 25 motorcycles patrolling Hoosier highways. Unlike their predecessors, today’s motorcycle trooper is issued a standard patrol car in addition to a motorcycle. During the winter months and inclement summer weather, today’s motorcycle trooper can patrol in a dry, heated, full-size sedan when temperatures dip below 40 degrees or when snow is flying or rain is falling. 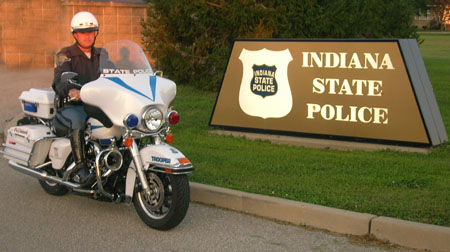 Today the Indiana State Police use a variety of vehicles for different purposes. Besides the standard patrol car, high performance Mustangs, and motorcycles, the Indiana State Police have trucks, vans, and trailers in their fleet. Crime Scene Investigators are issued vans to haul all the specialized equipment needed to process crime scenes and to transport evidence. ISP maintenance personnel use vans and trucks to perform their various jobs and a variety of cars and trucks are used by undercover ISP officers to blend in with the public in order to conduct surveillance, work with informants, and deal with the criminal element without “blowing their cover.” Specialty teams such as Emergency Response Teams and Explosive Ordinance Disposal teams utilize large utility trucks to transport specialty equipment. 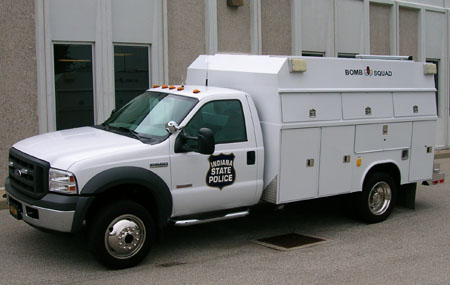 Besides ground travel, the Indiana State Police have utilized aircraft for many years. After WWII air travel had proven itself as a very safe mode of travel. The Indiana State Police realized the potential for aircraft utilization beyond just a speedier mode of transportation. In addition to transportation, aircraft can be used for traffic patrol, air rescues, and air to ground searches. It can also be used as a means of surveillance when other means might be less effective. In 1948 ISP acquired a Navion airplane which would be used for the next three years. Aircraft continued to be utilized throughout the 1950’s as the Aviation Section continued to grow and helicopters were introduced into the air fleet. Today the ISP Aviation Section has three fixed wing aircraft, three helicopters, and six pilots. 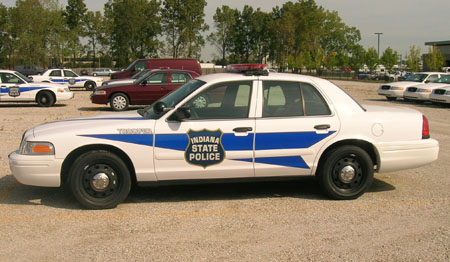 Whether driving a patrol car, a van, cruising down the highway on two wheels, or flying the friendly skies, today’s Indiana State Trooper still strives to maintain that level of service and professionalism to the public their predecessors worked so painstaking to achieve.