After the Indiana State Police formed in 1933 it largely consisted of basically untrained, ill equipped traffic officers left over from the Motor Vehicle Police. The first formal “academy” or recruit school began July 15, 1935 at the Indiana State Fairgrounds in Indianapolis. The applicants were given physicals, underwent a “character” investigation, took a written exam, were fingerprinted, and were personally interviewed by the Superintendent and members of the State Police Board before they were accepted to attend the training. There are conflicting accounts of exactly how many candidates were selected but it was somewhere between 80 and 100. The recruits were housed and slept on Army cots on the second floor of the horse barn and ate their meals at the State Fair Hotel near Gate 6. The training lasted five weeks and again, there are conflicting accounts, but between 60 and 70 passed the rigorous training program to become the first formally trained troopers. The following year the Indiana State Police moved its recruit training to the campus of Indiana University in Bloomington where recruit schools would be held for the next 40 years. In 1976 the Indiana State Police began training its troopers at the then “new” Indiana Law Enforcement Academy located near Plainfield, IN. This location remains the I.S.P. recruit training facility yet today. 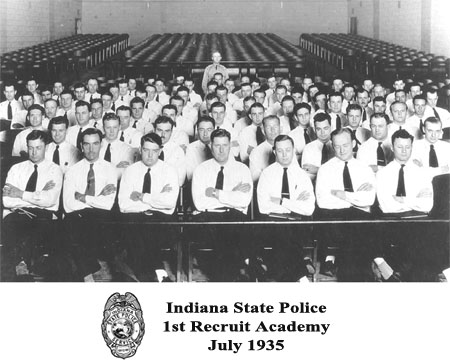 Much as it was in 1935 and as it has been throughout the history of the Indiana State Police, not just anyone can become a trooper. Today’s applicants must undergo a rigorous and competitive selection process and are highly scrutinized before they are offered the “privilege” of attending recruit training. The selection process of today still consists of written testing, physical examination, background investigation, oral interview, and the applicant still has to be fingerprinted. In addition, applicants must also submit to a polygraph examination, go through a psychological examination, and pass a physical fitness test as part of the selection process.

Even after an applicant successfully completes all the steps of the selection process, there is still no guarantee they will become a trooper. Since the first school in 1935, recruit training has increased and become more sophisticated and demanding. Recruits today are still trained in all of the “traditional” law enforcement disciplines such as criminal law, traffic law, firearms, self-defense, first-aid and riot control are but a handful of the courses of training received. However, today’s I.S.P. recruit training consists of other facets as well. Today’s troopers are trained in psychology, emergency driving, “Verbal Judo,” and “Survival Spanish” to name a few. Moreover, today’s recruit school is no less than 24 weeks long. During the entire training period the recruit must study, maintain a high level of physical fitness and maintain their uniform, personal appearance and room in inspection condition at all times while conforming to strict military-type discipline.

Throughout their careers Indiana State Troopers undergo continuous in-service training in an effort to stay up-to-date in the latest law enforcement knowledge, techniques and ever changing technology. Today’s Indiana State Trooper is dedicated to the service of the citizens of Indiana and strives to maintain the reputation and high level of professionalism those in the illustrious history of this great department worked so hard to achieve.