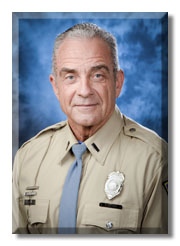 ... served twenty-four and half (24½) years with the Anderson Police Department prior to joining the staff at the Indiana Law Enforcement Academy in April of 2003. While with the Anderson Police Department, Lieutenant Guthrie worked in patrol for ten (10) years, served as Training Coordinator for eight (8) years, and was promoted to Assistant Chief in 1997 and served six and half (6½) years before retiring.

Lieutenant Guthrie's primary duties include instructing Police Ethics, Physical Tactics, Use-of-Force, Ethics and Stress to Jail Officers.  Lieutenant Guthrie is also the Assistant OIC of the Physical Fitness Assessment for the Basic Course, the OIC for the Police Chief Executive Program, along with serving as the Assistant Basic Course Commander.