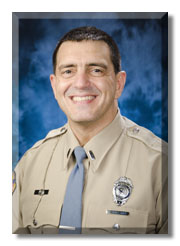 Nick Pollaro served for twenty years with the Valparaiso Police Department and retired as the Captain of Patrol prior to going into the private sector.  He joined the staff at the Indiana Law Enforcement Academy in March of 2009.  Lieutenant Pollaro served his entire tenure at Valparaiso Police Department in the patrol division.  While at the Valparaiso Police Department, Lt. Pollaro held the ranks of Patrol Sergeant, Patrol Lieutenant and Captain of Patrol.  He served as the department’s physical tactics instructor for fifteen years.  He was a guest instructor at the Indiana Law Enforcement Academy and instructed physical tactics for many officers and departments in Northwest Indiana.

Lieutenant Pollaro is a graduate of Saint Joseph’s College and a graduate of the 92nd Basic Session of the Indiana Law Enforcement Academy.  He holds several certifications as an instructor in physical tactics training and studies martial arts ranging from stick and knife fighting to ground fighting.

Lt. Pollaro’s primary duties at ILEA include Physical Tactics along with other Basic Course classes.