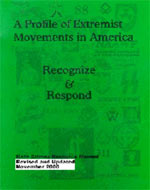 "A PROFILE OF EXTREMIST MOVEMENTS IN AMERICA -- RECOGNIZE & RESPOND"

Definition of a Hate Crime

This year the Indiana General Assembly passed bias crime reporting legislation that defines a bias crime as follows: "an offense in which the person who committed the offense knowingly or intentionally: (a) selected the person who was injured; or (b) damaged or otherwise affected property by the offense because of the color, creed, disability, national origin, race, religion, or sexual orientation of the injured person or of the owner or occupant of the affected property was associated with any other recognizable group or affiliation." (Section 1. IC 5-2-5-1; House Enrolled Act No. 1011, Effective July 1, 2000; emphasis added)

For purposes of its data collection, the FBI defines a hate crime as: "a criminal offense committed against a person or property which is motivated, in whole or in part, by the offender's bias against the victim's race, religion, disability, ethnic origin, national origin, or sexual-orientation." Even if the offender was mistaken in his/her perception that the victim was a member of the group, the offense is still considered a hate crime because the offender was motivated by bias against the person or group.