The Early Military Records database is a compilation of records of the Indiana Territorial Militia and the Indiana State Militia. Also known as Indiana Rangers, Indiana Militia, and the Indiana Legion, the organization would finally become known as the Indiana National Guard. The database contains over 19,000 names of early Hoosier soldiers who participated in the Battle of Tippecanoe, the War of 1812, and the Black Hawk War. Officers appointed to the ISM during times of peace are also listed throughout the early part of the 19th century and frequently mirror those found in the Mexican War and Civil War databases that also saw war time service. Two of the main sources used were appointment books for commissioned officers; therefore, it is apparent that non-commissioned officer and privates are not well represented in this database. Should other sources become available they will be added.

Data entry was completed by retired employee and volunteer  Ann Loyal from various sources including a card index first compiled by former archivist Laurence Meldrum in the 1970’s. To search the database, visit our Military records series on the Digital Archives and select the title Early Military Records.  No additional data is available within the original sources. All text was transcribed.

Taken from an early index and some of the muster rolls of the Battle of Tippecanoe and the War of 1812, the Indiana Territorial Militia index is available as a part of the Early Military Index on the Indiana Digital Archives. All information has been transcribed. Due to gaps in some records, not all soldiers, particularly privates and non-commissioned officers may be listed. Digital Images of the Indiana Muster, Pay, and Receipt Rolls, War of 1812 indexed by the Indiana State Library are also available on the IUPUI Program of Digital Scholarship Webpage.

Indiana Militia, 1821- 1851
Alphabetical index of officers commissioned. Gives names, rank, and unit.  All information has been transcribed and is available in the Early Military Index on the Indiana Digital Archives.

Indiana Black Hawk War Militia Index, May-July 1832
Alphabetical card file includes name, rank, unit, term of enlistment and by whom enlisted. All information has been transcribed and is available in the Early Military Index on the Indiana Digital Archives.

Indiana Militia, 1877-1896
Alphabetical index by name. Information given includes name, rank, unit and unit location. May give date of muster, age, occupation. Not yet transcribed. 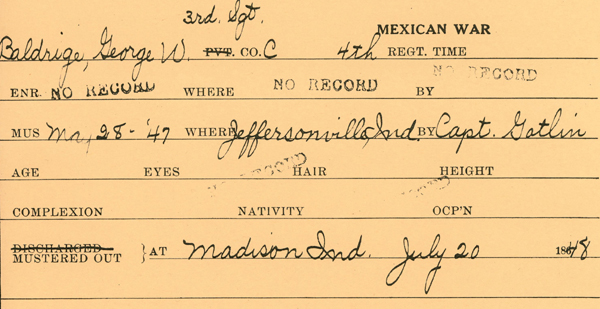 Indiana Mexican War Volunteer Index, 1846-1848
Alphabetical card file for five Indiana Volunteer Regiments. Information given includes name, rank, muster in and muster out dates. Patrons may request a copy of the card for a fee, however, all information has been transcribed and the information is now available on the Indiana Digital Archives.

Indiana Spanish-American War Volunteers, 1898-1899
The Adjutant General's index to the muster rolls includes name, unit, rank, age, physical description, birthplace, occupation and muster in and muster out dates. Indexing is underway. Researchers will also be interested in the National Guard Collection 1898-1940, which is searchable on the Indiana Digital Archives. Soldiers serving in Indiana regiments during the Spanish American War would have done so through National Guard regiments. Though the Guard files for the Spanish American War participants will typically only contain an enrollment card, if the soldier continued to re-enlist he might have more information in his file. Some of these men also served during the Phillipine Insurrection and remained in the National Guard for many years. 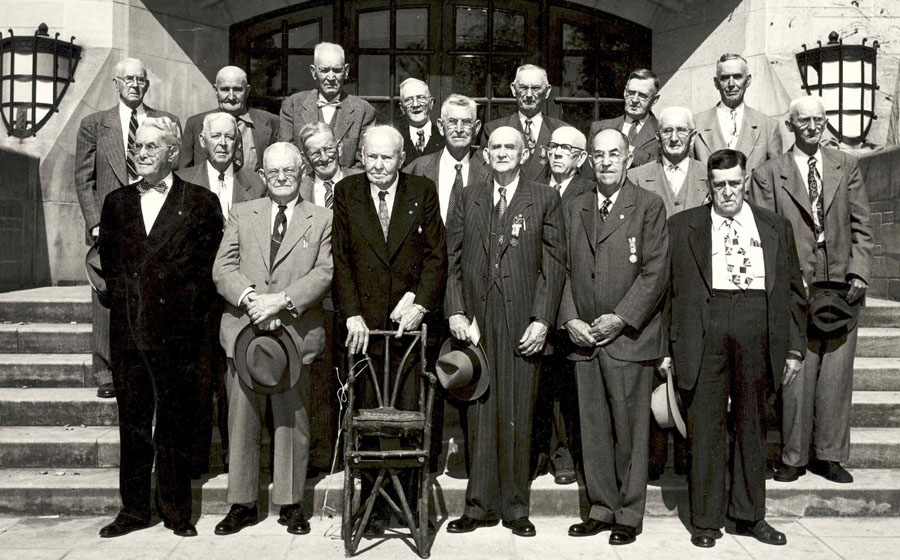 United Spanish War Veterans
Membership cards of the Indiana Department, United Spanish War Veterans, 1903-ca.1964 are available on microfilm in our reading room. Information includes name, rank, unit, date and place of death. Additional material is available in the compiled files of the USWV, which may include correspondence, supporting pension material for the veteran and spouse, and TAPS, or death notices. USWV members did not have to belong to Indiana regiments, as this was a fraternal affiliation with the main purpose of assisting veterans.