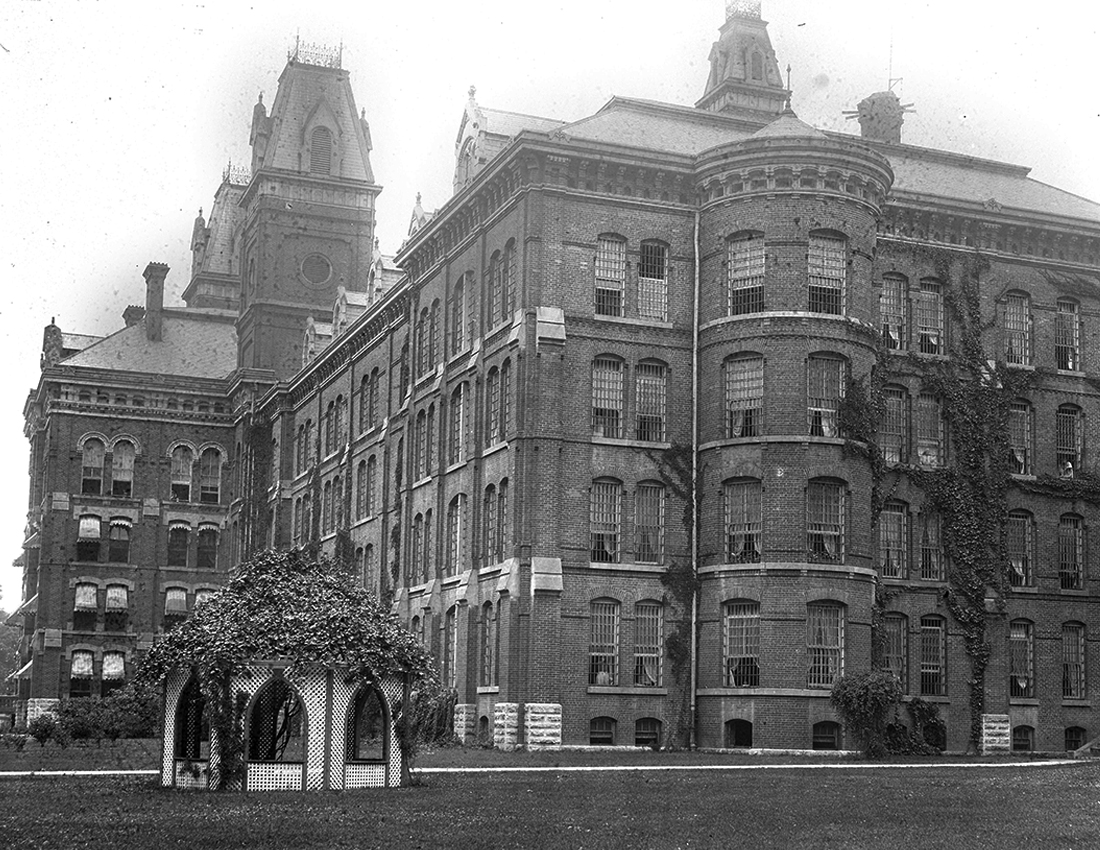 Indiana's first state hospital was enacted in 1827, but not built until 1848. It witnessed the long evolution of mental health treatment from isolation to community-centered care, admitting tens of thousands of patients over its long history. IARA has an extensive digital exhibit on the Hospital here: Central State Hospital Collection Exhibit

Dedicated in 1949 at Westville, LaPorte County, the hospital’s civil division began admitting patients from 17 counties in northern Indiana in 1951.  The maximum security division opened in 1954, replacing the old Hospital for Insane Criminals at the Indiana State Prison.  This division served the criminally insane from the entire state.  Beatty Hospital was converted in 1979 into the Westville Correctional Center.  Patients from the civil division were transferred to other mental health hospitals.  A total of 18799 patients were admitted between 1951 and 1979.  The hospital’s admission index and microfilmed patient records are at the Indiana State Archives.

The state’s newest mental health facility was authorized by the Indiana General Assembly in 1961, on the eve of the shift from institutionalization to community care for the mentally ill.  The first children were admitted to Evansville PCC in 1966.  It serves emotionally disturbed children in 19 counties in southwestern Indiana.  The facility is still open.  As of June 2008, 1144 patients had been admitted.  For more information on patient records contact the hospital.

Opened in 1890 as the Southern Indiana Hospital for the Insane, the facility, known as “Woodmere,” was located on 879 lushly wooded acres.  It served primarily counties in southwestern Indiana.  A disastrous fire in 1943 forced closure of the hospital for two years.  The records were lost, but “ heroic action” by staff saved nearly all the 1100 patients.  After rebuilding, Evansville reopened in 1945 and is still in operation.  Through June 2008, 23749 patients had been admitted.  For information on patients admitted before the fire, contact the Indiana State Archives.  Contact the hospital for information on patients admitted after 1945.

Indiana’s second oldest mental health facility opened in 1879 at Knightstown.  It was relocated to Fort Wayne in 1890.  The first patient admitted that year was an eleven year old boy from Ossian, Wells County.  It served mentally retarded children from throughout Indiana until 1939, when its service area was reduced to the northern half of the state. Its mission was expanded to include patients of all ages with other developmental disabilities.  Before closure in 2007 the facility had admitted 12162 patients.  The center’s admission registers, card index, and a nearly complete set of medical records on microfilm, are at the Indiana State Archives.

The Indiana Hospital for Insane Criminals was authorized by the Indiana General Assembly in 1909 and opened on the grounds of the Indiana State Prison at Michigan City on October 19, 1912.  It housed convicted criminals who were adjudged insane and persons indicted or acquitted because of insanity.   The criminally insane from the entire state were incarcerated here.  The inmates were transferred in 1954 to the newly opened Maximum Security Division of the Dr. Norman M. Beatty Memorial Hospital at Westville, Indiana.

Primarily a research and teaching hospital affiliated with Indiana University, the first patients were admitted in July 1952.  The hospital continues in operation.  A total of 17975 patients had been admitted as of June 2008. At its closure, the hospital's patient records were stored at the IARA Records Center. They are only accessible to the patients and their legal representatives.

The 1335 acre campus of the Northern Indiana Hospital for the Insane opened in 1888 on a high bluff over the Wabash River, hence its popular name “Longcliff.”  It serves primarily counties in northern and west central Indiana.  The institution is still in operation, admitting patients with mental illnesses and criminally involved or “forensic” individuals not committed to the Department of Correction.  Logansport had admitted 38498 patients as of June 2008.  The hospital maintains a complete admission index.  The first inmate register (1888-1905), case history books through 1919, microfilmed patient records from the 1950s and 1960, and a sample of records from other years are at the Indiana State Archives.

The 585 acre campus opened in 1910 as the Southeastern Hospital for the Insane.  Situated on a bluff overlooking the Ohio River, it was appropriately called “Cragmont.”  It was built to serve patients living in southeastern Indiana.  Still in operation, the hospital had admitted 47106 inpatients as of June 2008.  The hospital’s complete medical records through 1987 are at the Indiana State Archives.  A master admission register is maintained by the hospital.

This facility opened in 1920 on 1813 acres near Butlerville in Jennings County.  Known originally as the Indiana Farm Colony for the Feeble-Minded, it became a separate institution for mentally retarded children in 1937. Legislation in 1939 limited its service area to the southern half of the state.  Its role too expanded over the years to include individuals of all ages with other developmental disabilities. Prior to closure in 2005 Muscatatuck had admitted 8117 patients. The Indiana State Archives has the hospital’s two admission registers. Only a sample of the early medical records survive. Records for patients discharged after 1972 were saved and transferred to the State Archives.

No patient records from the Neurodiagnositc Institute in Indianapolis are currently held at the Archives.

This facility opened in 1907 on 1300 acres in rural Henry County as the Indiana Village for Epileptics.  It was one of only seven facilities in the world built especially to care for persons with convulsive disorders.  Prior to New Castle’s opening many epileptics had been housed in county jails and poor asylums.  Its mission expanded in 1955 to include treatment of the neurologically disabled.  It was an important center for anticonvulsant drug research in the 1960s and 1970s.  Prior to its closure in 1996 New Castle had admitted 6461 patients.  The State Archives has the master card index, two admission registers, a sample of the early medical records, and complete records for patients discharged from 1988-1998.

The facility was established in South Bend in 1950 as the Northern Indiana Children’s Hospital to care for children with polio.  As the need for beds for children crippled by polio declined, the 1961 General Assembly converted the hospital into a unit for the care of mentally retarded children.  It later transitioned into caring for developmentally disabled children in the northern half of Indiana.  By the time the facility closed in 1999, it had admitted 16974 patients.  The admission register and microfilmed patient records are at the Indiana State Archives.

This hospital, popularly known as “Easthaven,” opened in 1890 on a 1000 acre campus near Richmond in Wayne County.  It serves counties in east central Indiana.  Richmond is still in operation.  As of June 2008 it had admitted 42251 patients.  The hospital maintains a complete admission index.  A sample of the medical records has been sent to the State Archives; the remaining records were destroyed.

Silvercrest was authorized in 1938 as the Southern Indiana Tuberculosis Hospital.  The doors opened in New Albany in 1940 and closed in 1972.  The facility reopened in 1974 to treat children with developmental disabilities.  2284 patients were admitted between 1974 and 2006, when the facility closed for good.  The State Archives has the center’s master admission index.  For the years 1974-1982 only the face sheets from the medical records survive.  The State Archives has all the medical records from 1983-2006.

Besides the records of the individual state hospital, researchers should be familiar with a number of related collections in the Indiana State Archives and in local court houses.

From its creation in 1889 the Board of State Charities systematically collected information on all aspects of public welfare in Indiana, including persons in state hospitals and correctional facilities.  Entry of information into the state hospital index continued until 1986.  Virtually every patient discharged from a state hospital has a card.  Information on these cards includes dates of admission and discharge, hospital name, patient hospital number, diagnosis, county of residence, and date and place of birth.  Many cards give the names of parents and siblings.  The card index is the only source of information on patients admitted to Evansville State Hospital before the 1943 fire.  Access to this essential search tool, which is on microfilm, is restricted to State Archives’ staff for reasons of confidentiality.

An Act of 1818 empowered circuit courts in Indiana to conduct inquests into cases of suspected insanity and to appoint guardians for individuals adjudged insane.  Later acts gave courts the power to commit such persons to state hospitals.  Over time inquest paperwork became increasingly detailed, with long lists of questions about the individuals accused of insanity and detailed statements by examining physicians.  One copy of the inquest was sent to the state hospital.  Another copy was kept by the county clerk or the information transcribed into so-called “Insane Books.”

For commitment information not found at the State Archives, check with clerks of court in the various Indiana counties.  Some clerks still have their copies of old inquests for insanity or the so-called “Insane Books.”

Indiana Code regarding medical records is more stringent than federal code, and as such all medical records in Indiana are considered confidential in perpetuity. Releasing mental health records from the Indiana State Archives requires the completion of State Form 46356 if they are accessing the records of a deceased relative or are the legal representative of a patient, or the patient themselves. In the case of a deceased patient, the researcher's relationship to the patient must be clearly documented with published sources such as obituaries and the U.S. census or official vital records. In all cases, the researcher must supply current and valid ID for themselves.

For unrelated academic researchers, supervised access to patient records can be given in order to evaluate those records as a research source. In order for any information to be recorded or published from those records, the research must be evaluated and approved by the IARA privacy committee. Please contact arc@iara.in.gov if you wish to pursue such research.