While slavery has been illegal in Indiana since Statehood, it was legal in the preceding Indiana and Northwest Territories. Although it was first introduced by French traders, who spread the practice among native tribes, the earliest record regarding slavery in the State Archives collection is the 1805-1810 Clark County Register of Negro Slaves (Acc# 2004381). This register is a comprehensive but incomplete accounting of all the enslaved people in the County at the time, which included portions of several modern counties in the southeastern part of the State. 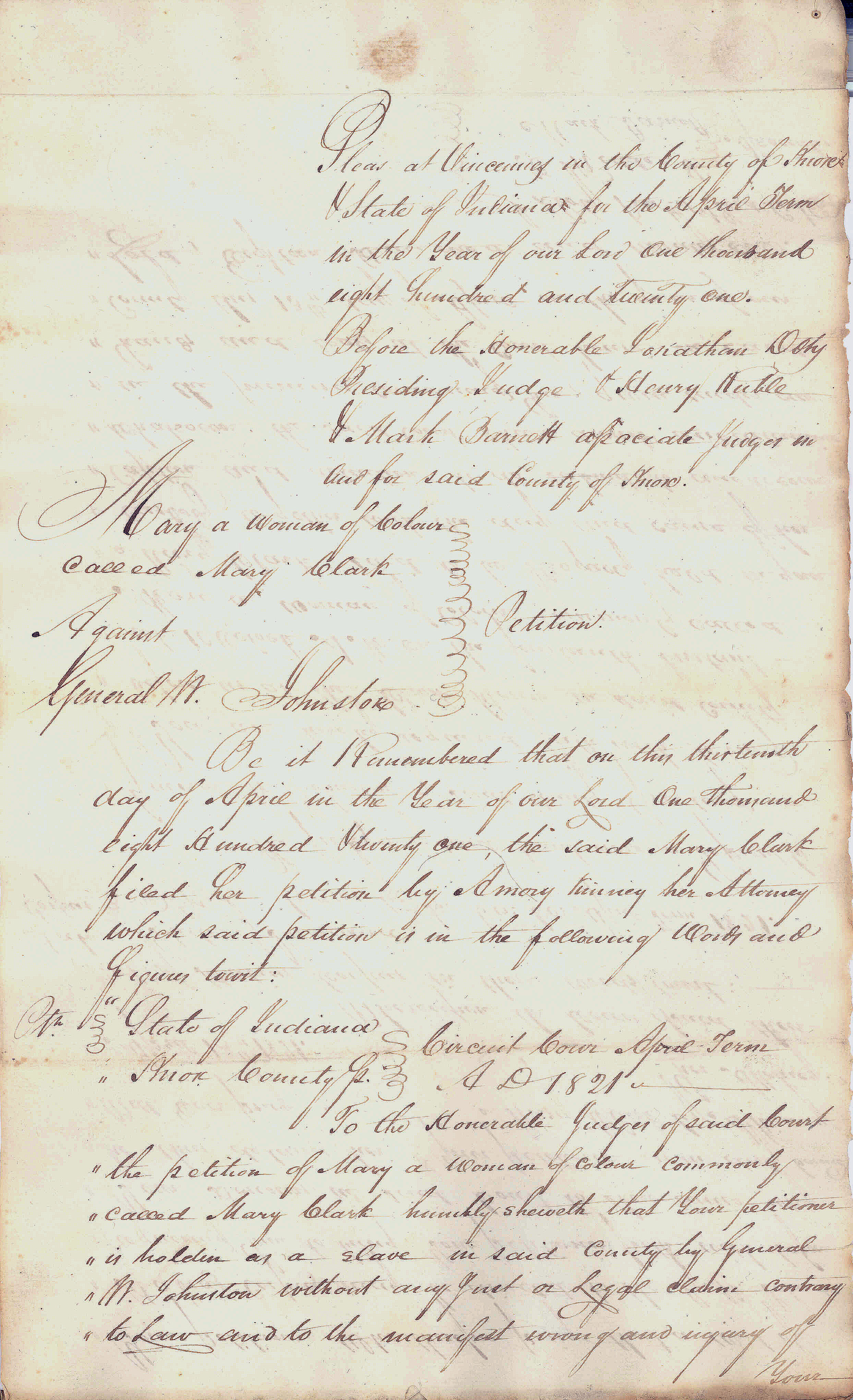 Despite Indiana's mixed attitudes towards slavery and African Americans in general, the State and its citizens maintained a largely antagonistic relationship with hunters of escaped slaves. There are several cases in early County Court records regarding alleged fugitive slaves and their attempted removal from the State by slave hunters. Notable among these are the case of William Trail from Switzerland/Franklin County (B100204985S), and the 1853 case of Freeman v. Robinson from both the Marion County Court (Acc# 2007236 B118 F12) and Indiana Supreme Court (B100218505S).

Although slavery was made illegal in the State by the 1816 Constitution, it was an open question whether slaves that moved into the State were considered free by virtue of their residence. This question was answered by State v. Lasselle (B100205607Q) in 1820. Originating in Harrison County, the case involved prominent local citizen Hyacinthe Lassalle and an enslaved woman known as Polly. It was orchestrated by abolitionists as a test case for existing enslaved persons in the State. Polly had been purchased before the Northwest Territory was organized; therefore, her victory would indicate that all the existing slavery in the State was considered illegal and void.

While Lasselle v. State ended all explicit slavery in Indiana, many early slave owners had arranged for their enslaving to continue under the guise of indentured servitude, coercing their slaves to sign lopsided legal agreements that kept them in de facto if not de jure slavery. These arrangements were struck down by the 1821 Clark v. Johnston case (B100218505S), originating in Knox County.

Although Indiana's courts occasionally acted as allies to enslaved people and abolitionists, the State's legislature was generally less benevolent. After an 1831 act that required "free negroes and mulattoes" to submit a bond ensuring their productivity and good behavior to their county of residence, the 1851 Constitution went one step further by prohibiting any immigration to the State by such peoples. As a result of this prohibition, all existing African American residents of the State were required to register with their county, creating the Registers of Negroes and Mulattoes. The Archives has these registers from 12 Counties: Clark, Franklin, Gibson, Jackson, Jennings, Knox, Ohio, Orange, Posey, Switzerland, Tippecanoe, and Vigo. 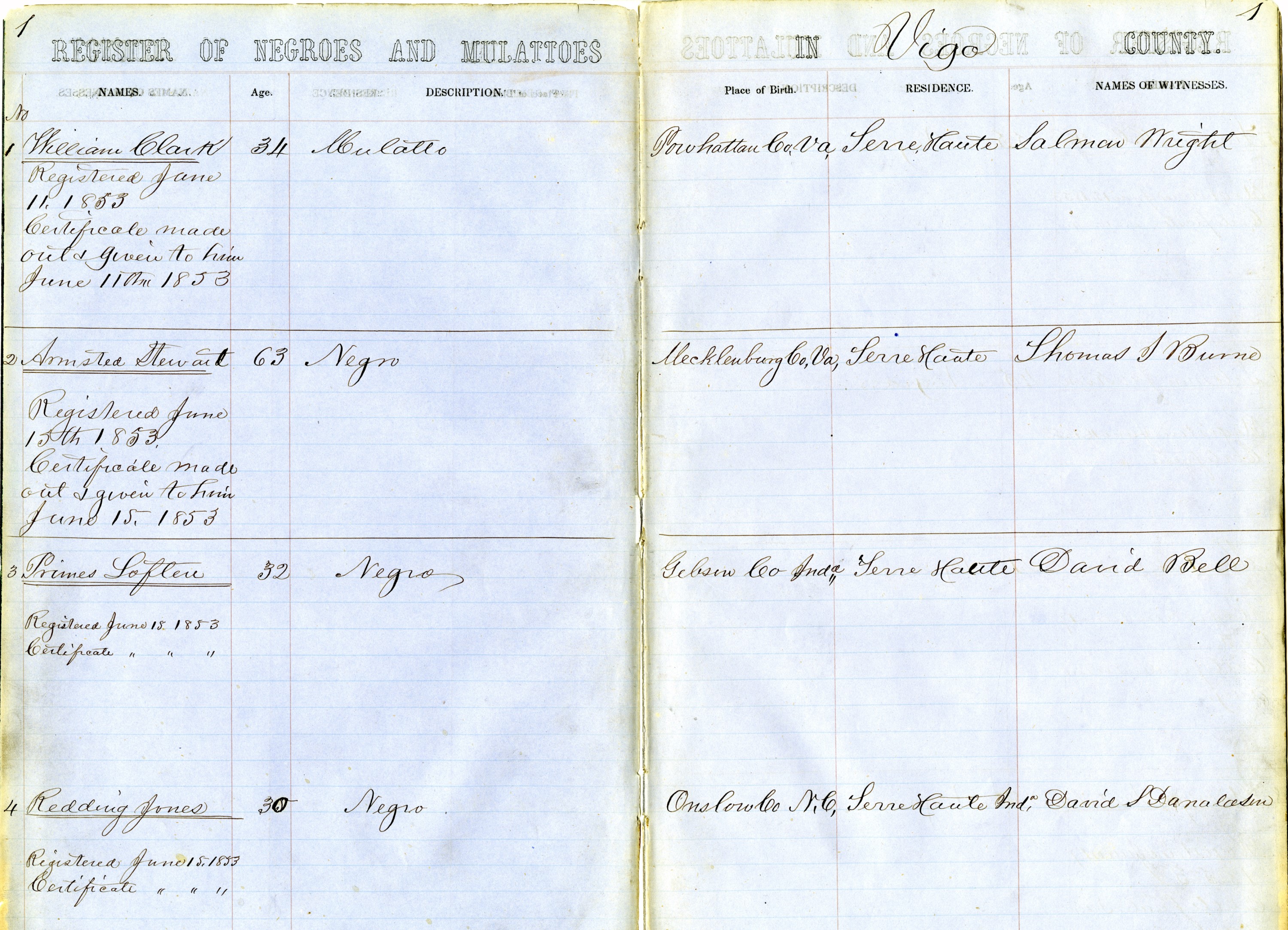 The Board of Colonization

The fines and forfeited bonds from the 1831 act were intended to go to the State's Board of Colonization. In contemporary context, the Colonization Movement was an effort to return free African Americans to Africa, particularly Liberia. It had a mixed reception from all interested parties: black, abolitionist, and white supremacist, but was generally accepted, if not popular, in the antebellum period.

The State Archives collection includes the proceedings and financial records for the State Board of Colonization (Acc# 1988021 and 1984091), as well as a list of residents of Indiana sent to Liberia (Acc# 1988022) and a number of records from Governor Joseph Wright (1849-1857), an ardent supporter of the movement.