Department of Correction Records at the Indiana State Archives

Prison records located at the Indiana State Archives are transferred by the Indiana Department of Correction ten years after the release or death of the offender. For inmates currently in the correctional system, please visit the DOC webpage, which provides information about the current adult and juvenile facilities. An Offender Search and information about Victim Notification is also available for the current status of prisoners held or on parole with the state of Indiana. Many county jails also offer similar resources on their websites. As an example, Marion County information is available here.

For more information about records related to John Dillinger and his gang, please visit the Dillinger Collection page. This page may also be useful to researchers interested in learning more about the types of information found in prison records.

Many records of the various correctional facilities held by the State Archives have been indexed on the Indiana Digital Archives, which will soon move to the Research Indiana Indexes. To request copies of any of the records, or for more information, please contact the Indiana State Archives at arc@iara.in.gov.

The first state prison in Indiana opened in Jeffersonville in 1822. Although it was later moved to Clarksville, it is often referred to as the Jeffersonville Prison. Local residents now know the building as the old Colgate-Palmolive Company. The facility originally housed both men and women. After a second State Prison was opened in Michigan City in 1860, the State Prison South only took inmates from the southern half of the state. In 1897, State Prison South was converted to a Reformatory. The older prisoners and those accused of more severe crimes were sent to the Northern prison. An index to the Descriptive Book of the State Prison South, 1822 to 1897, may be searched online at the Indiana Digital Archives, which will soon be moving to the Research Indiana Indexes.

When the State Prison South was converted to a Reformatory, older prisoners and those accused of more serious crimes were sent to the Northern prison. At this time, all prisoners were assigned new numbers and mug shots were taken. A general database of the inmate record books dating from 1897 to 1966 may be searched at the Indiana Digital Archives. In addition to the entries in the inmate record books, samples of prisoner packets, warden packets, and commitment packets, as well as a commitment index, are available for many inmates. A large collection of mug shots are also available, particularly for the first nine thousand prisoners. More recent records may be available but are not included in this index. Contact the Indiana State Archives at arc@iara.in.gov for more information.

In the early 1900s, the Board of State Charities conducted interviews with inmates sentenced to life at the Indiana State Prison in Michigan City. Each prisoner was given the opportunity to give a statement telling his side of the story. The men often named family members and others involved in the crime for which they were sentenced, and discussed any parole or pardon attempts. There are sometimes follow-up notes indicating whether the prisoner had died or been pardoned. At least two of the inmates were pardoned by the President of the United States.

There is also a corresponding album of photographs. To see which inmates have a statement and photograph available, search the Indiana Digital Archives.

The State Prison South was converted into the Indiana State Reformatory in 1897 to create a more positive environment for younger prisoners accused of less serious offenses, but too old for the Boys' School. This reorganization resulted in prisoners over the age of thirty, or those with previous felonies or a capital offense, being sent to the northern facility at Michigan City. The southern prison became a reformatory with rehabilitation as the chief objective for prisoners aged sixteen through thirty. The inmates had the opportunity to learn a trade or finish their education. Although some prisoners were able to take advantage of these opportunities, others fell victim to the more negative aspects of prison life. Dr. Harry Sharp started the practice of sterilization at the Reformatory in 1898, helping to bring Indiana to the forefront of the Eugenics movement. For more information on Eugenics, visit the online "Fit to Breed" Exhibit.

In 1922, the Reformatory moved to Pendleton, Indiana. Some of the more famous residents have included John Dillinger and several of his gang members. An index of the inmates of the Reformatory from 1897 through 1923 is available at the Indiana Digital Archives. Additionally, the Board of State Charities and Correction Card Index offers additional information. The Indiana Reformatory is now known as the Pendleton Correctional Facility.

In 1867, the Indiana General Assembly created the House of Refuge for Juvenile Offenders. Governor Conrad Baker selected the site, located on 225 acres of land in Plainfield, Hendricks County, Indiana. The name changed in 1883 to the Indiana Reform School for Boys, and again in 1903 to the Indiana Boys’ School. Judges from any criminal or circuit court in Indiana could commit juvenile males charged with crimes, incorrigibility, or delinquency. The function of the school was to reform juvenile offenders through education and vocational training.

The Indiana State Archives holds admission registers, inmate packets, and commitment books from the Indiana Boys’ School. The records for those committed between 1867 and 1937 have been indexed and compiled into a database found at the Indiana Digital Archives. Names of boys committed after 1937 are not online, but records may be available at the Indiana State Archives. Information entered in the database includes the inmate’s name, inmate number, county of conviction, and date received at the Boys’ School.

Originally housed with adult female inmates at the “Reform School for Girls and Women’s Prison” in Indianapolis, a separate institution for girls was created in 1899 and known as the “Indiana Industrial School for Girls.” The facility was renamed the Indiana Girls’ School in 1907 and moved to a new campus at Clermont in Marion County.

An index to juvenile female offenders, beginning September 12, 1873 through 1935, is searchable at the Indiana Digital Archives. Information listed in the database may include the girl’s name, age, the county from which she was committed, and date of admission. A date of discharge and other information may be shown. There is additional information available on many of the inmates at the Indiana State Archives, including commitment papers, inmate packets, personal letters, and other paperwork. There are photographs of many of the early inmates.

Names of juvenile females admitted between 1936 and 1984 are not online for reasons of confidentiality. Researchers will need to contact the Indiana State Archives at arc@iara.in.gov to determine if a record exists for girls admitted after 1935. 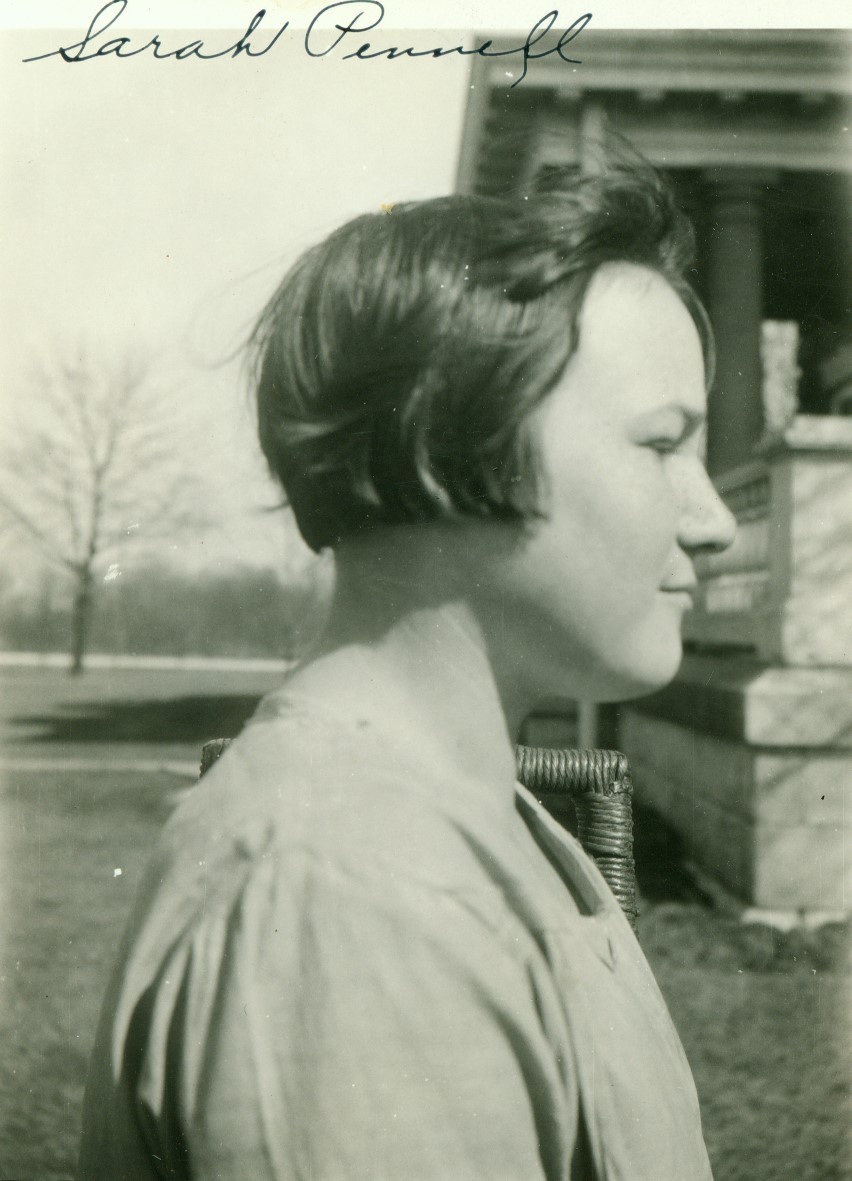 The Indiana Women’s Prison opened in Indianapolis on October 8, 1873. The first seventeen inmates were brought from the State Prison South at Jeffersonville, where they had been housed in a separate wing from male inmates. Known initially as the Indiana Reformatory Institution for Women and Girls, the name changed in 1889 to the Reform School for Girls and Woman’s Prison. Ten years later, the two departments were separated into the Industrial School for Girls and the Indiana Woman’s Prison. In 1907, juvenile female offenders were moved to the newly opened Indiana Girls’ School at Clermont and its space occupied by the Correctional Department of the Indiana Women’s Prison (IWP). To this department were committed women misdemeanants over the age of eighteen. The Women’s Prison proper received women over eighteen convicted of a felony.

The inmate record books dating from 1873 to 1969 have been indexed on the Indiana Digital Archives. Information entered in this database includes the prisoner’s name, race, county of conviction, crime, term of sentence and/or fine, sentence date, and the date(s) of discharge, parole, pardon, or death. When applicable, the notes field includes information on transfers to other institutions, aliases, maiden/married names, escapes, and previous convictions or paroles.

The inmate record books also contain family history and other information not included in this database because of space limitations. Additionally, there are admission cards, commitment papers, prisoner packets, occasional photographs, and other records for some prisoners. Researchers should contact the Indiana State Archives at arc@iara.in.gov to learn what records are available on an inmate and to order reproductions of documents.

The State Farm was built in 1914 and 1915 by prisoners from the State Prison and Reformatory for the purpose of housing male misdemeanants. It was located on 1,892 acres of land one mile west of Putnamville and seven miles south of Greencastle. It opened officially, April 12, 1915 as an industrial farm colony, meaning that the prisoners actually farmed the land for their own sustenance and income for the state. Men over the age of sixteen, convicted of misdemeanors by circuit, superior, criminal or city courts, could be sentenced to the State Farm rather than a county jail or workhouse. (Adult female misdemeanants were sent to the Correctional Department of the Indiana Women's Prison.) Sparse early samples of some of the prisoner packets survive. A searchable database of these records is available at the Indiana Digital Archives. Additionally, occasional cards may be found in the Board of State Charities  and Correction Index. A set of "IN and OUT" books are also available for research, however, the patron must already know the time the inmate entered the facility in order to glean  the limited information these books offer. Valuable information on inmates may be found in microfilmed reports of the Board of State Charities located in the Archives Reading Room. These monthly reports range in date from 1915 through 1931, providing lists of inmates who were admitted and discharged.

The Indiana Hospital for Insane Criminals was authorized by the Indiana General Assembly in 1909 and opened on the grounds of the Indiana State Prison at Michigan City on October 19, 1912. It housed convicted criminals who were adjudged insane and persons indicted or acquitted because of insanity. The criminally insane from the entire state were incarcerated here. The inmates were transferred in 1954 to the newly opened Maximum Security Division of the  Dr. Norman M. Beatty Memorial Hospital. The Beatty Hospital was converted to Westville Correctional Center in 1979. 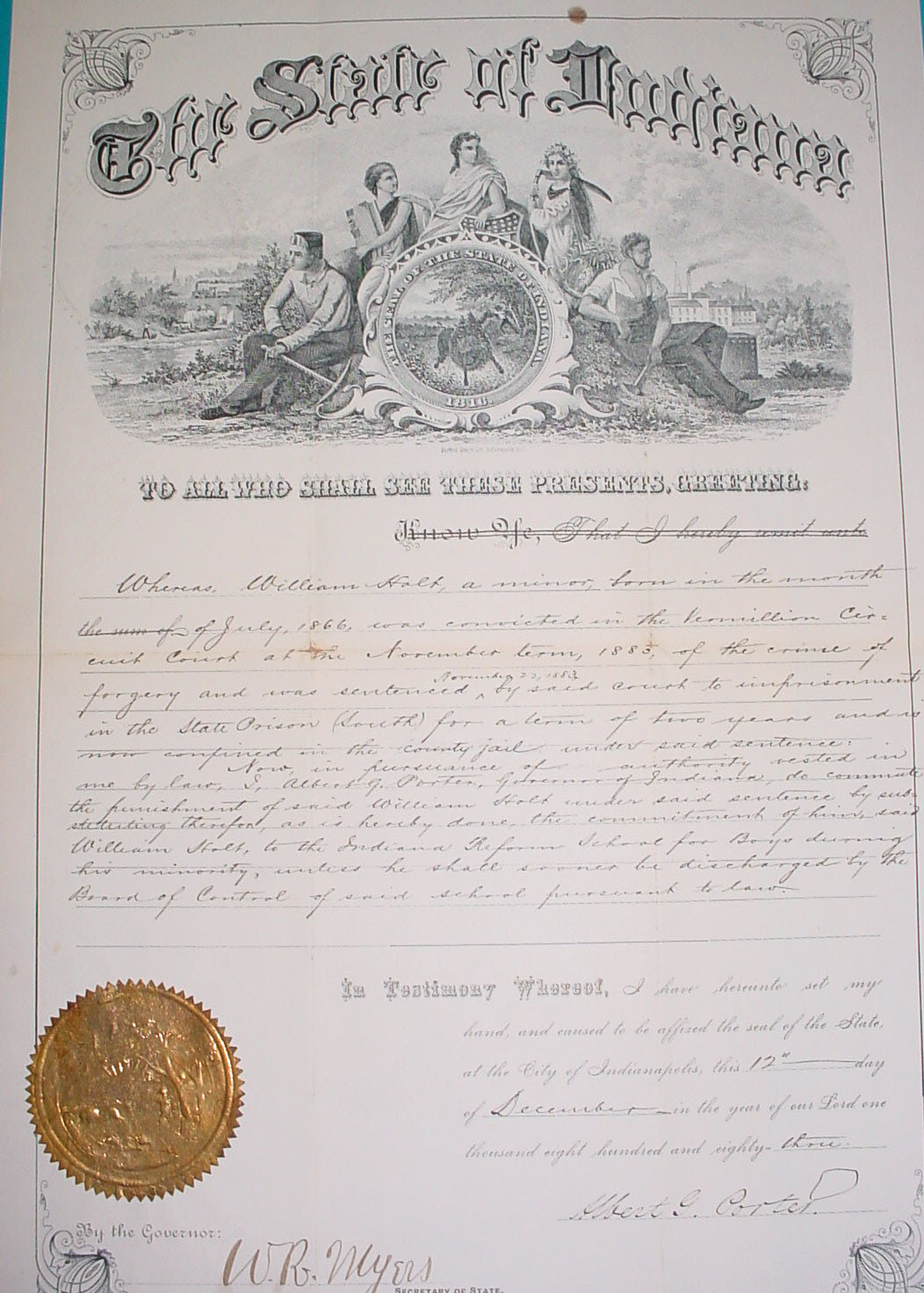 The first set of  Secretary of State Petitions begin in the early 1800’s and end around the time of the Civil War. The database for these records is searchable online at the Indiana Digital Archives. Citizens frequently wrote to the governor attempting to gain pardons, paroles, reprieves, commutations of sentences, or remissions of fines for crimes ranging from swearing to murder. This early 19th century collection provides just a sample of the types of records that might be found in a larger collection, yet to be indexed, which spans the last half of the 19th and early part of the 20th century. Patrons may request information regarding copy fees  for either collection through email at arc@iara.in.gov. Prisoner records from the state correctional facilities will often indicate if a prisoner received a pardon or early parole.