The main goal of the open air school movement in Indiana was to care for children who were anemic and/or under nourished, or who had tuberculosis or had been exposed to it. Children with any communicable diseases, severe diseases, or were mentally challenged were excluded from open air schools. 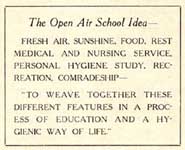 Here are some of the attributes of an open air school as set out by the Indiana State Board of Health:

A typical day at an open air school in Indianapolis went as follows:

As a greater understanding of tuberculosis developed, open air schools grew out of favor. They dwindled out in Indiana in the 1930s.

All images are provided for the personal use of patrons and researchers and may not be incorporated into publications, websites, or exhibits without written permission of the Indiana State Library or other appropriate copyright holder. Image Sources: Photographs are from the American Lung Association of Central Indiana Collection housed in the Manuscript Section of the Indiana State Library. Other images are from the Indiana Division Pamphlet Collection and Clippings file. Text Sources: Text on verso of photographs Bodenhamer, David J. and Robert G. Barrows. Encyclopedia of Indianapolis. Bloomington, IN: Indiana UP, 1994. Indiana State Board of Health. The open Air School Movement in Indiana. Indianapolis, IN, 1918. Kingsley, Sherman C. Open Air Schools and Open Window Rooms: How to Build and Equip Them. New York: 1916. Sunnyside Sanatorium. A History of Sunnyside Sanatorium, 1917-1952. Indianapolis, IN, 1952.