In June 2008 the Indiana State Library and the Indiana University School of Library Science (IU SLIS) at Indianapolis announced receipt of a $1 million grant from the Institute of Museum and Library Services for recruiting and educating 30 ethnically/racially diverse students for Indiana's Librarians Leading in Diversity (I-LLID) Project. The following organizations have pledged their support to the success of the project: The State Library Diversity Advisory Council (DAC);  Administrators and Directors of Large Public Libraries in Indiana (ADOLPLI); Academic Libraries of Indiana (ALI) ; Indiana Black Librarians Network (IBLN); Indiana Library Federation (ILF); and Indiana Special Libraries Association (InSLA).The fellowships were designed for individuals from diverse backgrounds who have been traditionally underrepresented in the library profession. This opportunity will enable them to pursue the Master of Library Science Degree to be equipped to join the professional library workforce in Indiana.  By accepting the fellowship, the students are obligated to successfully complete the MLS with a minimum 3.0 Grade Point Average. They will be required to work in an Indiana library for at least two years upon graduation. Fellows have been linked with experienced library professionals as mentors and resources. Some fellows have been or are currently working or volunteering in various types of libraries, museums, or historical societies. Their presence as working professional librarians will help Indiana libraries to better serve their diverse populations. 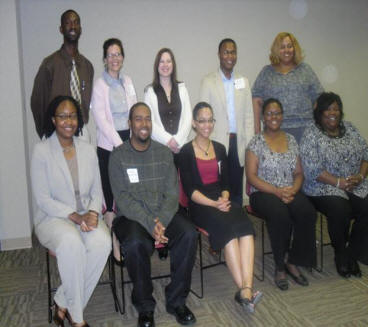 After four rounds of applications, 31 fellows were recruited for the project. Twenty-one fellows chose the IU SLIS campus in Indianapolis (IUPUI) and ten chose Bloomington campus (IUB). Two cohorts of ten fellows were recruited from August to October, 2008 and from February to April 2009; From June to August 2009 seven fellows made up the cohort. A final class of four fellows was recruited from December 2009 to February 2010. There were 70 applicants for the 31 fellowship spots. Of the successful candidates, 25 were Indiana residents and 6 fellows were from out-of-state. The first class of fellows began classes in January, 2009 and the final class began in May 2010. Twenty-nine of the 31 fellows successfully completed the program.

The fellowship included tuition payments for up to 36 hours of the Master of Library Science (MLS) Program. Additionally, some travel and conference expenses were paid and the fellows received a monthly stipend for up to 16 months. They were engaged in the IU SLIS learning community on both the Indianapolis and Bloomington campuses. The students learned from professionals near and far and worked together to establish camaraderie within and among the cohorts.

The I-LLID Project coordinators and supporters sought opportunities to expose the Indiana library community to these fellows as potential employees, co-workers, and future library leaders. The project ran from September 2008 through August 2012. The fellows are working in academic, public, school, and special libraries, and independently. Look for them around the state and in the national library news.

About the Institute of Museum and Library Services

The Institute of Museum and Library Services is the primary source of federal support for the nation’s 122,000 libraries and 17,500 museums. The Institute's mission is to create strong libraries and museums that connect people to information and ideas.

In all, IMLS awarded 31 institutions grants totaling $20.3 million as part of the Laura Bush 21st Century Librarian Program. The purpose of this initiative is to help bolster the library profession. Since 2002, IMLS has helped fund the education of 3,220 master's degree students, 186 doctoral students, 1,256 pre-professional students, and 26,186 continuing education students.