When the site for Indianapolis, Indiana’s new state capitol, was selected in 1820, Alexander Ralston was commissioned to design the new city. At its heart was a large circular commons that would include the Governor’s mansion, just two blocks to the east of the Indiana Statehouse. 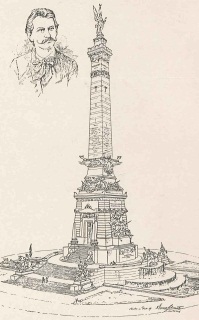 No Indiana governor actually lived at the site and in 1857, the structure was demolished and the area designated Circle Park. A bronze sculpture of Indiana's Civil War Governor Oliver Perry Morton was placed in Circle Park. Following the Civil War, there began to be talk of a monument to honor Hoosier soldiers and sailors that would "in some important way" incorporate the Gov. Morton sculpture. In 1887, the Indiana legislature designated a commission to plan a memorial to Indiana’s Civil War veterans. Although the Indiana General Assembly appropriated $200,000 for the monument,  news reports from the era, as well as commission reports, indicate that community organizations, particularly the Grand Army of the Republic (a Civil War veterans organization), were instrumental in raising funds for the Monument.

Winner of a competition to design the monument was Bruno Schmitz of Germany. He was well known for his military-themed monuments in Germany, some of them dark, compact and forbidding, but his concept for Circle Park in Indianapolis was uplifting, inspirational and celebratory.  Atop the monument, he envisioned the classic sculpture of a winged Nike (Greek goddess of war), representing victory in battle. Since its placement, the sculpture has been called Victory. In 1902 at the monument's dedication, artist T.C. Steele, a member of the Board of Experts that selected artists for the structure's various works of art, obviously preferred the name Victory over the term "Miss Indiana" that was apparently coined by the day's newspapers. Throughout the volumes of the original commission reports, however, the sculpture is called Liberty or simply “crowning figure”. 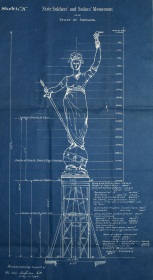 A true crowning figure to the monumental masterpiece, the design of the bronze sculpture atop Soldiers and Sailors Monument is a marriage of the classical Greek Victory image (a sense of action and triumph; adorned with flowing drapery) with the American image of Liberty with its torch symbolizing the light of civilization and its sword symbolizing justice. The eagle on the sculpture’s brow represents freedom. (For more information about the origins of Indiana's Victory sculpture, see Thoroughly American Victory)

Notice of a sculptural competition for the figure “Liberty” to crown the Soldiers and Sailors Monument went out in late November 1889. Commission reports for the period detail several trips to Cleveland, Ohio by members of the Indianapolis Soldiers and Sailors Monument Commission to view a similar project in Cleveland, Ohio. The Cleveland monument was designed and sculpted by native military hero Capt. Levi Scofield, an engineer and architect by training. One of his assistants on the project was George Thomas Brewster, born in Boston and actually a resident of New York.

Brewster, aged 29 at the time, submitted a design for the Indianapolis “crowning figure”  that drew praise from Indiana artist T.C. Steele who served on the Committee of Experts that awarded contracts for the monument’s various sculptures and adornments: “In the figure we find a simplicity and harmony of outline and a grace of movement, combined with vigor and strength superior to any of the others. …its expression in the simple grandeur and harmonious strength of the figure is a guarantee that the artist is in full sympathy with the object and 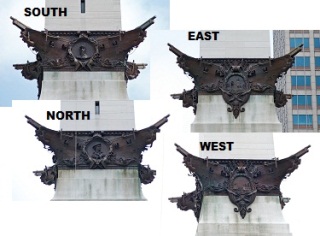 purpose of the monument.”

But the creation of the "crowning figure" was not entirely free of drama; young Brewster's design was subjected to long-distance critics and his mentor, Capt. Levi Scofield, accurately predicted the bronze foundry would be a source of cost overruns and delays. (Read Scofield's letter to the Soldiers and Sailors Monument Commission: "The Whole Country Was Charmed With It") However, when the sculpture was finally placed atop the monument in the week prior to September 4, 1893, Hoosiers developed an immediate affection for the lovely bronze creation.

George Brewster, who also designed two of the astragals for the monument, was a descendant of the leader of the Mayflower expedition William Brewster. He was classically trained at the Ecole des Beaux-Arts in Paris, France and had won the first prize ever awarded an American by the Paris school. Brewster’s naval astragal received this praise from Commission President Langsdale: “so far it is the most marked feature of the monument.”