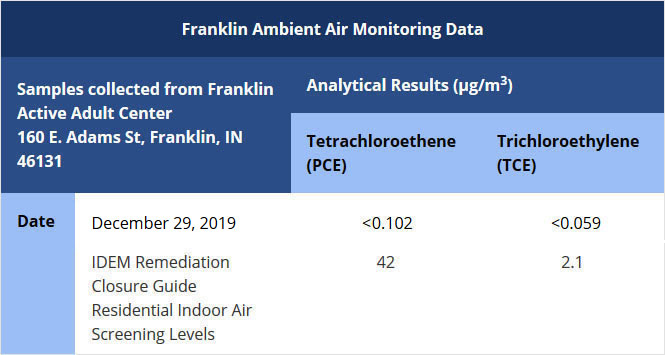 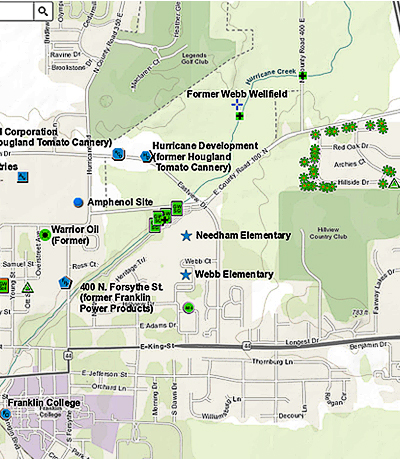 Hurricane Creek: Three surface water samples were collected on August 23, 2018. No detectable volatile organic compounds (VOCs) were found in any of the sample locations.

Edison Wetlands Association (EWA)/Mundell 2018 Report: IDEM committed to re-sampling three of the homes and the ambient air site due to the levels of contaminants detected as shown in the EWA (Mundell) air sampling report. In addition to 11 homes tested and found to have no vapor intrusion concerns, based on the results of IDEM’s and EWA’s subsequent vapor resampling of the 3 homes, subsurface and/or sewer vapors are not affecting indoor air at any of the sampled locations:

Groundwater and Soil Gas Sampling: Drilling was completed on August 28, 2018 and three groundwater samples were taken. Soil gas samples were collected on September 6, 2018.

Paris Estates Well Sampling: Sampling complete. None of the nine VOC chemicals, including TCE and PCE, were found in the water above the laboratory detection limits at any of the 24 homes tested. Individual results are available on the interactive map.

Franklin Investigation Activities Summary Outside of the Amphenol Investigation Area: As shown on the Franklin Area Investigations map [PDF], areas of potential concern are limited to the facilities of interest and a farm field located to the east of the former Hougland Tomato Cannery.

IDEM’s Office of Land Quality staff created the following IDEM guidance documents to help identify cleanup methods, technologies, or other tactics to use at contaminated sites in Indiana.

Franklin, like other cities and towns in Indiana, has a long commercial and manufacturing history. Environmental contamination in the city of Franklin has become a concern to its citizens. Residents have called attention to cancer cases in their community which they believe may be linked to environmental issues.

Exposure to volatile organic compounds can happen in many ways, but most commonly occurs when chemicals move through soil into groundwater and subsequently are taken up into drinking water wells. Vapors may also migrate through sewers and into structures (vapor intrusion).

These same chemicals may be present in residences and businesses through the use of certain consumer products such as cleaners, adhesives, lubricants, dry cleaning, and stain removers.

Two of three wells in the former Webb Wellfield were contaminated with the chemicals cis-1,2-dichloroethylene and trans-1,2-dichloroethylene based on findings from routine samples collected from the wells in compliance with the Safe Drinking Water Act. These chemicals are volatile organic compounds that were identified in the groundwater at the former Webb Wellfield in quantities that did not threaten the potability of the water supply in Franklin. However, upon finding increasing concentrations of these contaminants over time, Indiana American Water chose to discontinue the use of these two wells in 2007 and by 2013 had closed all three wells. By doing so, the potential threat of exposure to contaminants (ingestion via drinking the water) was eliminated and the continued safety of Franklin’s water supply was ensured.

At no time during the operation of the former Webb Wellfield was the water from any of the wells considered unsafe for public consumption.

As a result of the contamination found in the former Webb Wellfield, the Indiana Department of Environmental Management (IDEM) conducted investigations to determine the source of the contamination. IDEM found tetrachloroethylene and trichloroethylene contamination in the soil and groundwater west of the former wellfield (former Hougland Tomato Factory). The investigation was referred to IDEM’s State Cleanup Program and is currently part of an enforcement-led action. IDEM will ensure remaining routes of human and environmental exposure, if any, are eliminated.

U.S. EPA is responsible for overseeing the investigation and cleanup of the Amphenol site.