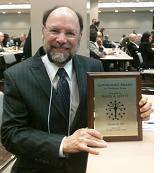 What happens when you're really good at a job that saves Indiana taxpayers hundreds of thousands of dollars annually? You get an award from Governor Mitch Daniels and recognition among your peers for a job well done.

Barry Levitt, senior database analyst/programmer for Indiana Family and Social Services Administration (FSSA), received The Governor's Award for Meritorious Service at the Legal Ethics Conference held Nov. 29, 2011 at Indiana Government Center South. The award recognized Levitt for his years of assisting state and federal agencies in detecting fraud in government. The annual conference is sponsored by the Office of the Inspector General. "Personally, I can attest to Barry's excellent results, including the federal indictments of state employees in 2011," David Thomas, Indiana inspector general, told conference attendees. "Barry's actions are well known by all persons in Indiana law enforcement."

Levitt is a digital data expert whose investigative technique focuses primarily on data mining. He pores over state accounting and transaction records looking for outliers - activity that just doesn't fit in with standard operating procedures. "I use list matching to look for exceptions that are there but not expected, or expected but not there," explained Levitt. "Such findings can be a road map to potential fraud."

white collar crime in government. In May 2011, three state employees were charged in a federal indictment with stealing nearly $200,000 from federal programs administered by FSSA. For more than six months, Levitt had assisted U.S. Department of Agriculture, U.S. Department of Health and Human Services, and FSSA investigators in cracking a fake benefits card operation. The trio was accused of creating fraudulent electronic benefits transfer (EBT) cards that were used to withdraw funds from bank ATMs, and to purchase goods at retail stores.

In June, FSSA Secretary Michael Gargano met with the investigation team thanking them for their good work, followed by a similar event at the governor's office where Gov. Daniels honored Levitt and the others. “I’ve known Barry for several years, and it’s great to see such a deserving person receive this kind of recognition. His efforts continue to pay big dividends for FSSA,” said Gargano. "There's a real sense of fulfillment knowing that your work is protecting taxpayer money,"  Levitt added.

Levitt is a New Hampshire native who grew up in Massachusetts before moving to Indiana more than 30 years ago. He earned a bachelor's degree in mathematics from Cornell University, and a MBA from Indiana University. Before joining FSSA in 2006, Levitt did computing work in the healthcare, printing and manufacturing sectors, among others. "My work is challenging. I use a variety of computer systems to create reports that must be interpreted by auditors," said Levitt. "And, it is very rewarding working with investigators to answer their questions."