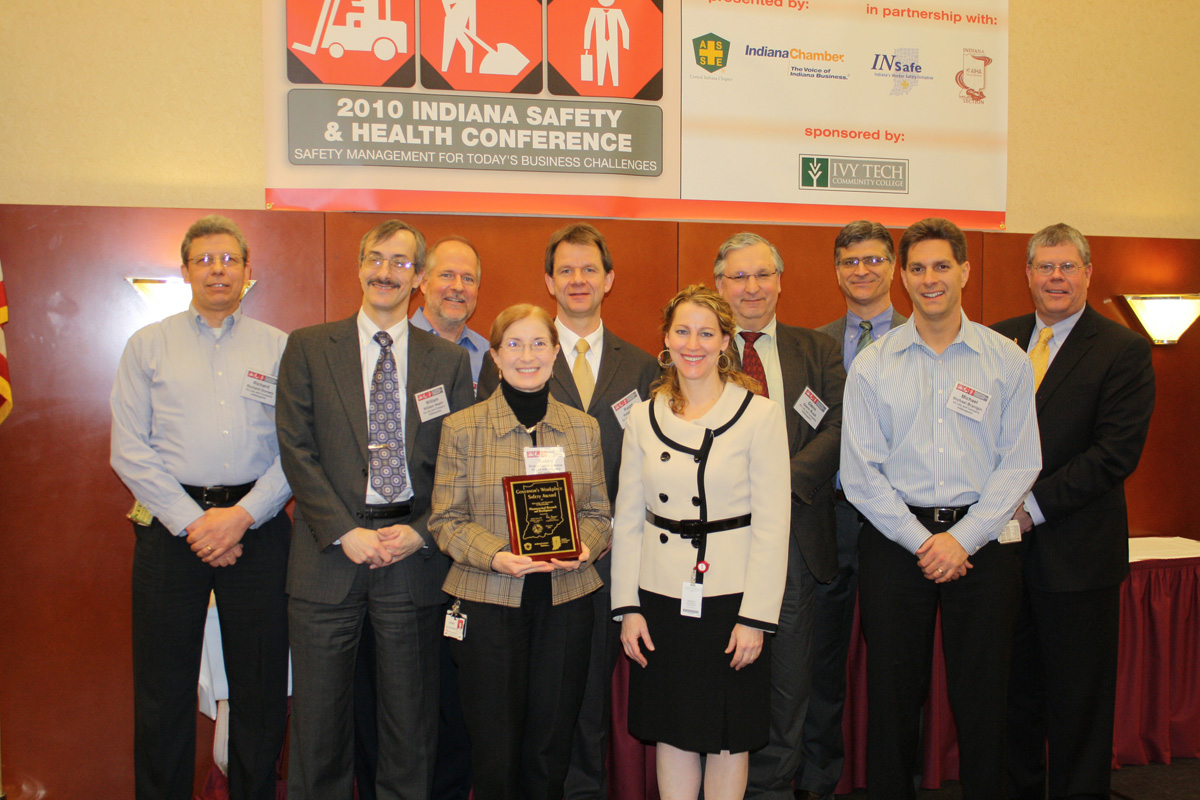 Eli Lilly and Company – Pharmaceutical Research and Development, Indianapolis is the 2010 Governor’s Workplace Safety Award recipient in the category of Education, Outreach and Partnerships. One of Eli Lilly’s parking lots is located across an extremely busy six-lane intersection. It has posed a challenging scenario for pedestrians commuting into the Lilly Technology Center-North campus since its inception. In five years, from 2003 through 2008, over 400 near-miss data points, which were collected from Lilly employees, indicated a need for an engineering solution. Together with the City of Indianapolis, a viable solution was identified and constructed. The solution was a pedestrian bridge. Both Lilly and the City of Indianapolis worked together for a consensus of design. The $1.5 million project was funded by Eli Lilly and Company. The project was completed at the end of January 2009. Success from this pedestrian bridge has been overwhelming, and those involved have received noteworthy praise about the comfort, convenience, security and safety delivered through this project. Eli Lilly's Technology Center has also received recognition from the Indiana Department of Labor as a VPP Star site. 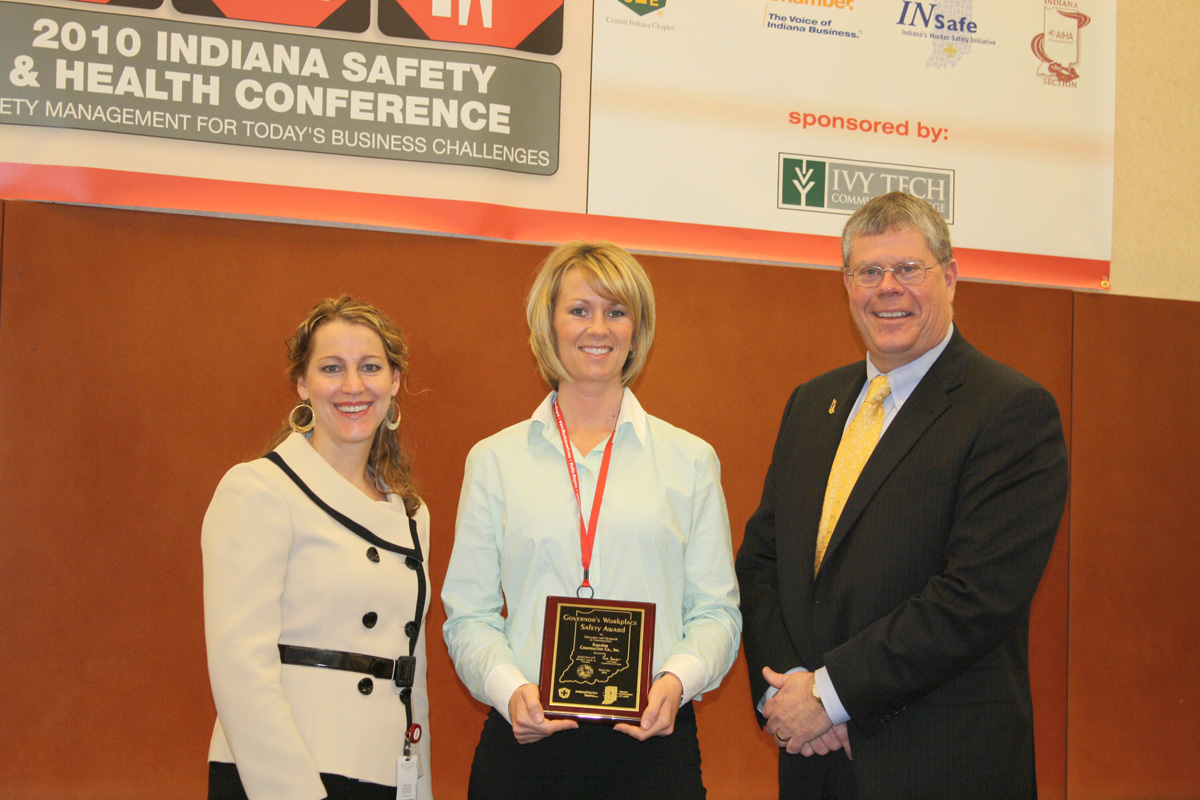 Superior Construction Co., Inc., Gary Indiana is the 2010 recipient of the Governor’s Workplace Safety Award in the category of Education and Outreach. Superior Construction considers every employee a part of the company’s safety department, and each employee has the authority to halt jobsite operations if a safety hazard is identified. In the past year, Superior Construction’s Injury/Incident Prevention Program, “Good Catch,” was developed and introduced. The objective of “Good Catch” is to educate employees and discourage them from being complacent on the job site by staying alert and reporting near-miss incidents, hazardous conditions, unsafe behaviors, equipment or process hazards or any other threatening hazards he or she may witness on the jobsite. Each “Good Catch” is immediately investigated and corrected. The “Good Catch” observer is rewarded with a $20 gas credit card. In the last year alone, more than 300 “Good Catches” have been awarded. The impact of Superior Construction’s “Good Catch” program has produced desirable results, as the company’s TRC rate dropped by more than 33% from 2008 to 2009. While the total impact of this program may not be realized for years to come, the initial results have been impressive. 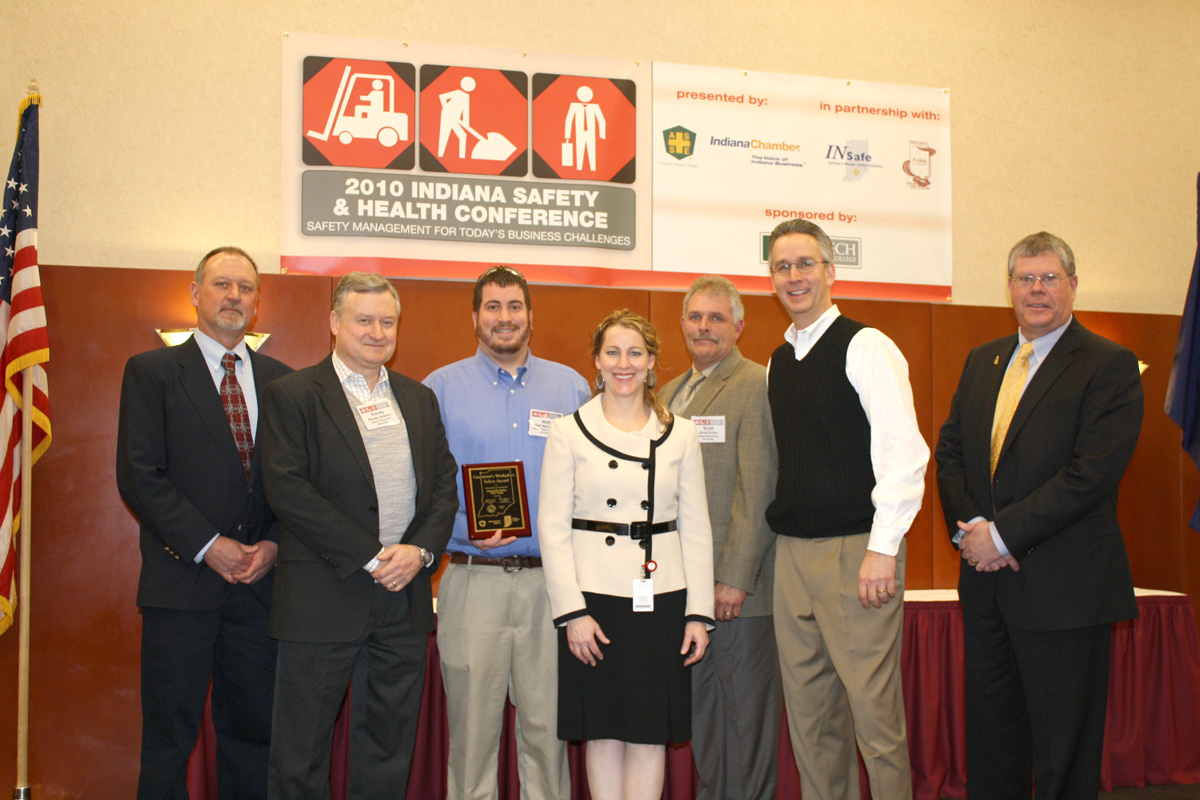 Indianapolis Roofers Safety Group is the 2010 recipient of the Governor’s Workplace Safety Award in the category of Partnerships in Construction. The Indianapolis Roofers Safety Group is comprised of leadership from Henry C. Smither Roofing Company, Inc., R. Adams Roofing, Inc., AAA Roofing Company, Inc., Southern Roofing, Inc. and Ralph Reeder & Sons, Inc. The insurance industry rates roofing as one of the highest risk crafts in the construction industry, and an Experience Modification Rate (EMR) over 1.0 is very typical of the industry group. Because roofing is a seasonal craft, one that can only be performed in favorable weather conditions, employee turnover is usually high, which creates challenges. The Indianapolis Roofers Safety Group uses its unique composition of members, which are both union and non-union, to continually improve safety performance in the workplace. 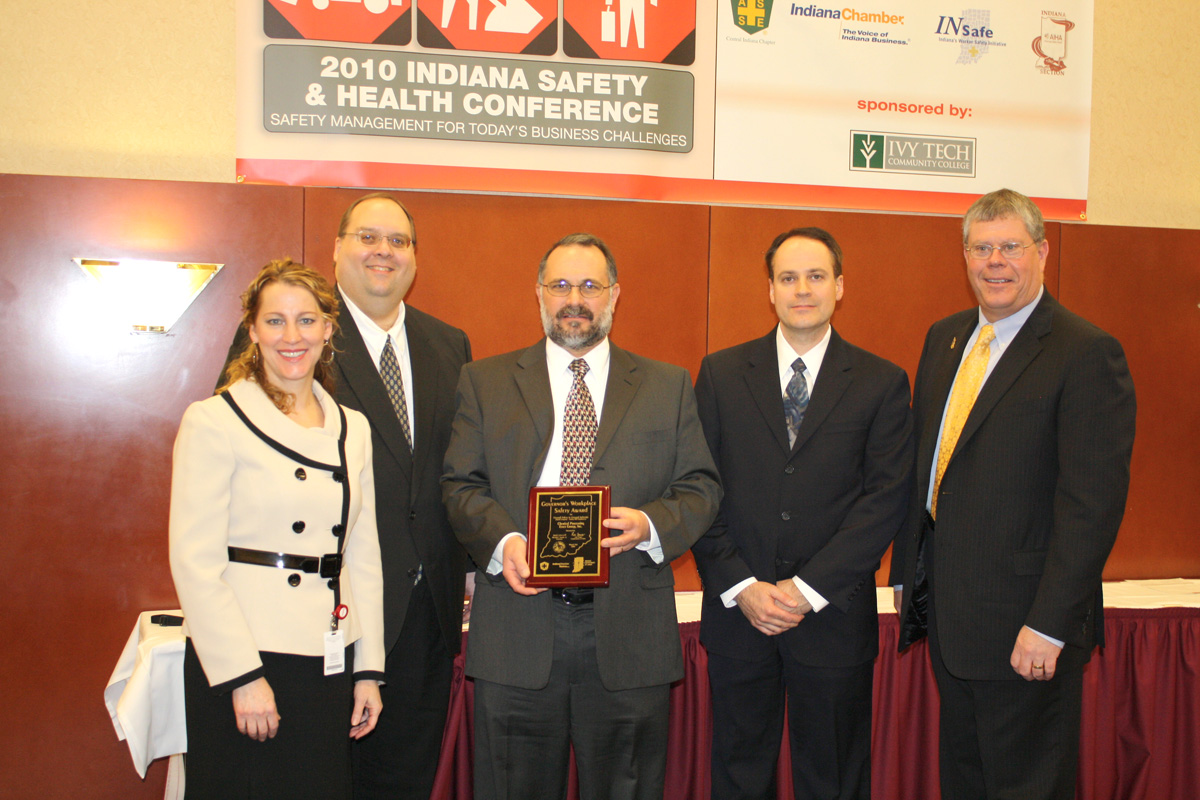 Operating 24 facilities worldwide, Superior Essex is a global leader in the design, manufacture and supply of wire and cable products. The Fort Wayne Superior Essex Chemical Processing facility has developed an innovative safety and health approach called “Safety Contact,” which reinforces occupational safety and health-related conversations between managers, supervisors and front-line employees. The company defines the “Safety Contact” innovation as “regularly and positively recognizing employees for safe behaviors he or she exhibits.” Superior Essex’s Chemical Processing facility has not experienced an OSHA recordable injury or illness in the last three years. Worker’s Compensation costs for this site for the past four years combined (2006 through 2009) were $352. 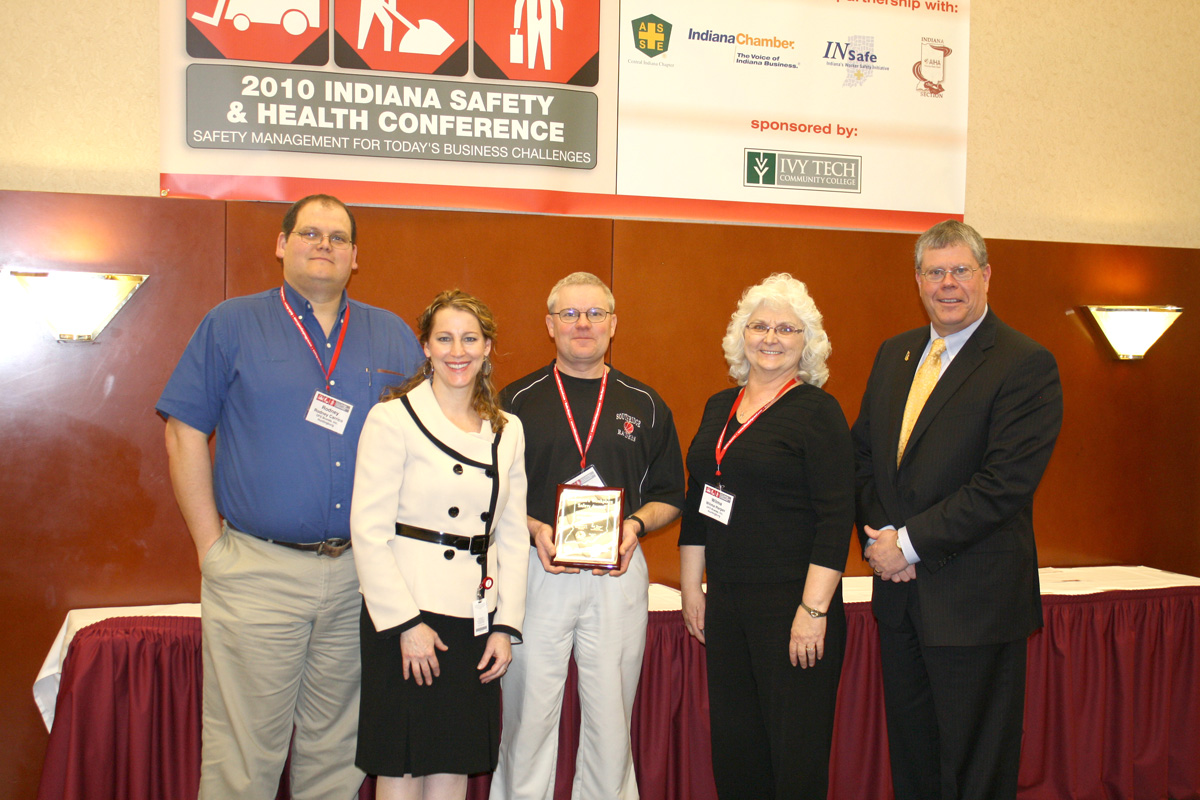 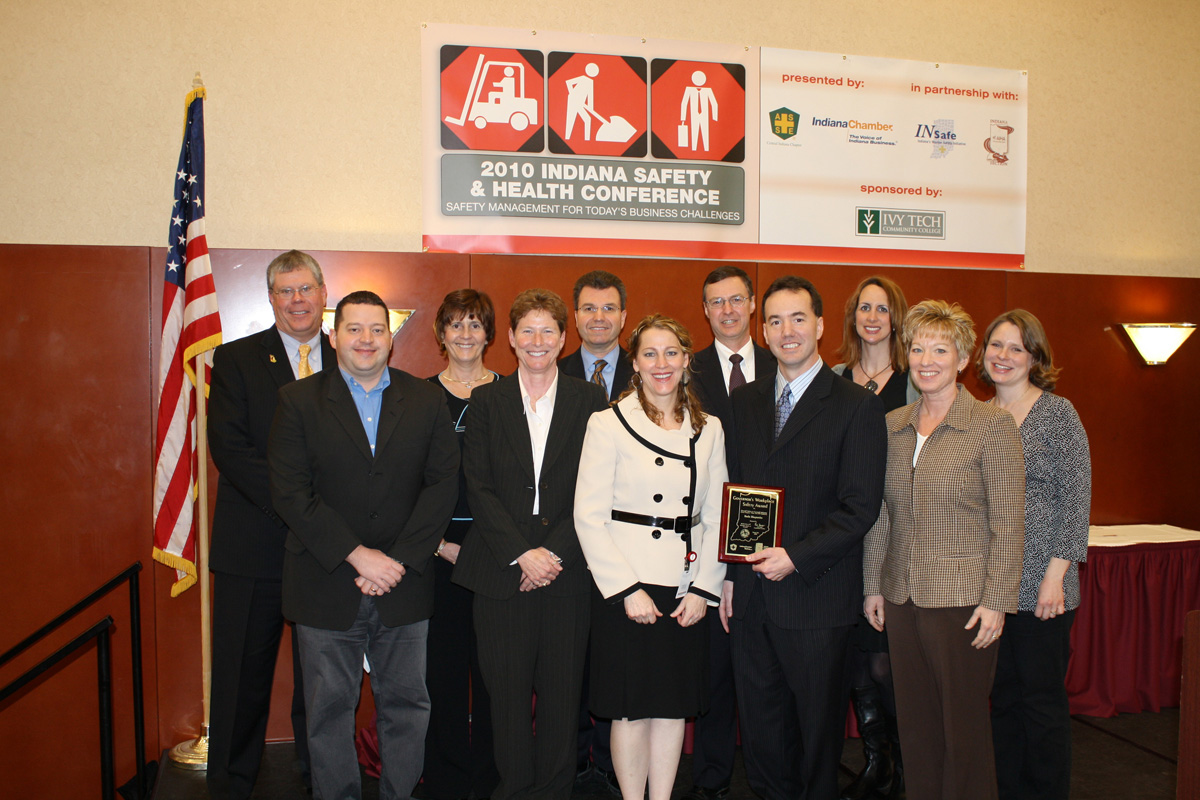 In 2009, employees of Roche Diagnostics logged approximately 9.6 million hours at work with an OSHA Total Recordable Case Rate of .94 per 100 full-time employees, 62% lower than the average for their industry. The company DART Rate is 71% below the industry average. In recent years, Roche Diagnostics has reduced Worker’s Compensation costs from nearly $588,000 in 2006 to $112,517 in 2009. Worker’s Compensation claims have also been reduced from a high of 70 in 2008 to 49 in 2009. Through the research of the Roche Diagnostics’ Safety and Health Department, sprains, strains and repetitive trauma injuries have been identified among the most frequently occurring and difficult to prevent injuries. In response to this challenge, Roche Diagnostics’ Safety and Health Department have committed their attention and resources to support of an ergonomic injury prevention initiative. 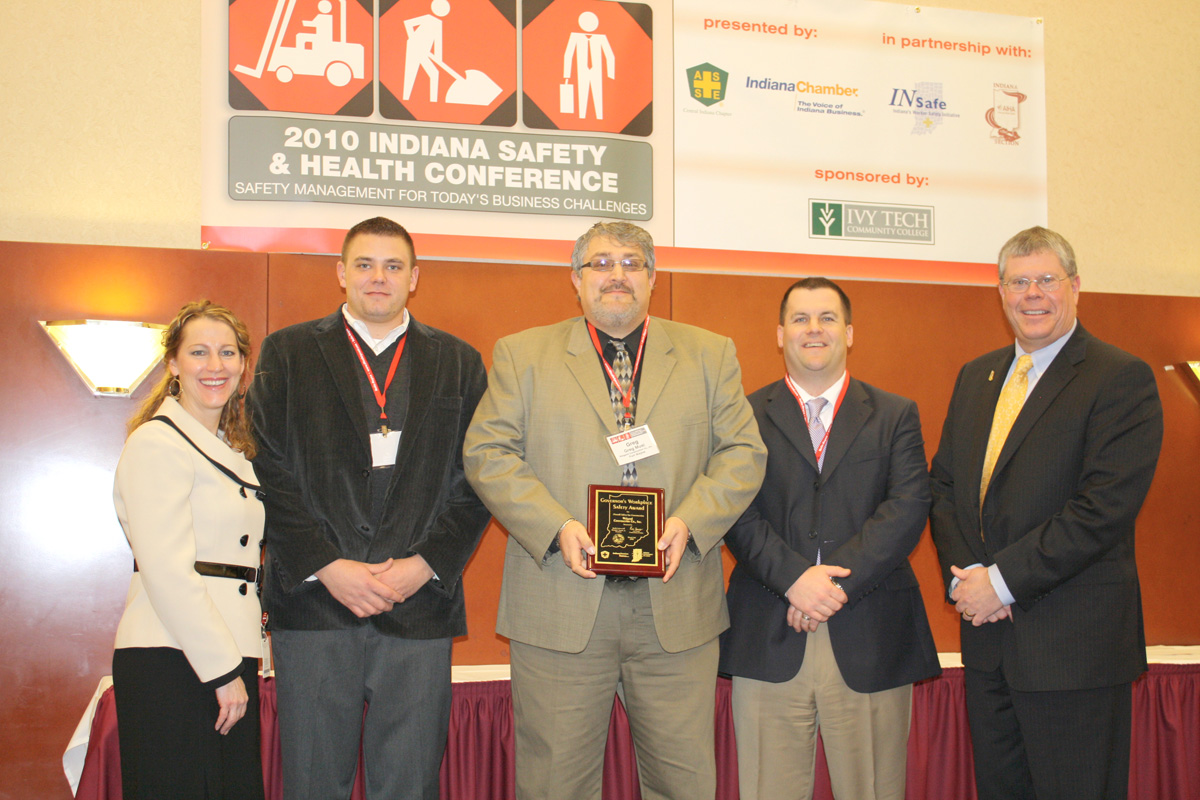 Weigand Construction Co., Inc. of Fort Wayne, Indiana is the 2010 Governor’s Workplace Safety Award recipient for Overall Safety in Construction. A rigorous 18-month on-the-job training program helps ensure that junior supervisors on Weigand Construction Co., Inc.’s jobsites keep worker safety and health in the forefront. Weigand Construction has developed a training agenda which includes classroom instruction, on-the-job training and company mentoring. Each junior supervisor attends an OSHA 30-hour outreach course, is involved with preparing and conducting jobsite toolbox safety meetings and shadowing senior Weigand employees in all functional areas. This meticulous training program and attention to detail has assisted the company in reducing Worker’s Compensation claim costs from a recent four-year high of $93,572, reported in 2007, to $752, reported in 2009. Additionally, in April of 2009, Weigand Construction Co., Inc. entered in a strategic occupational safety and health partnership with the Indiana Department of Labor for the construction of the Parkview Regional Medical Center.