About the Knobstone Trail 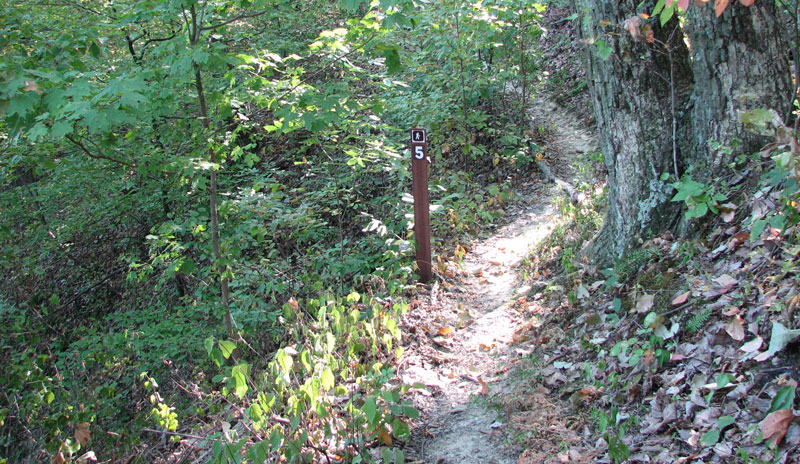 The trail traverses land with extreme relief distinguished by narrow, relatively flat-topped ridges typical of the Knobstone Escarpment - a knobby slope between the Norman Upland and Scottsburg Lowland, two of southern Indiana's natural land regions. The Knobstone Escarpment is one of Indiana's most scenic areas, rising more than 300 feet above low-lying farmland in some areas as it snakes northward from near the Ohio River to just south of Martinsville. A central upland, mixed hardwood forest (oak-hickory and beech-maple association) dominates much of the escarpment. "Knobstone" shale, which is actually a combination of weathered brown shale, sandstone and siltstone, is common in the area and gives the escarpment its name.

The Knobstone Trail is developed and managed for foot traffic only. Because of erosion, damage to structures, and the safety of hikers, horses, bicycles, and motorized vehicles are not allowed on the trail.

Because the trail follows the Knobstone Escarpment, there are many steep climbs and descents. It can be regarded as a rugged, difficult trail to hike. It is managed and maintained at backcountry standards, and structures are limited to primitive steps and waterbars. Maintenance responsibilities fall to a two-person field crew, occasionally assisted by volunteers. 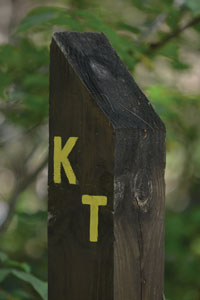 The trail crosses several roads, varying from state highways to gravel country lanes. Use caution when crossing these roads.

The Knobstone Trail passes primarily through state forests, which are managed for multiple uses including recreation, timber and wildlife production, and watershed protection. The areas are open to the public for hunting during season, and are managed actively to increase the fish and wildlife population. Timber management and harvesting also provide diverse cover and food necessary for the perpetuation of many game and non-game animal species, and helps ensure that forest resources will be available for future generations.

The Indiana Department of Natural Resources developed the Knobstone Trail as a cooperative effort between the Divisions of Fish and Wildlife, Forestry and Outdoor Recreation. The Nature Conservancy has helped acquire land necessary to complete the trail corridor. Construction and maintenance of the trail has been aided by many hours of volunteer work donated by various hiking clubs and other groups. Much of the initial trail construction was accomplished through the Young Adult Conservation Corps program.