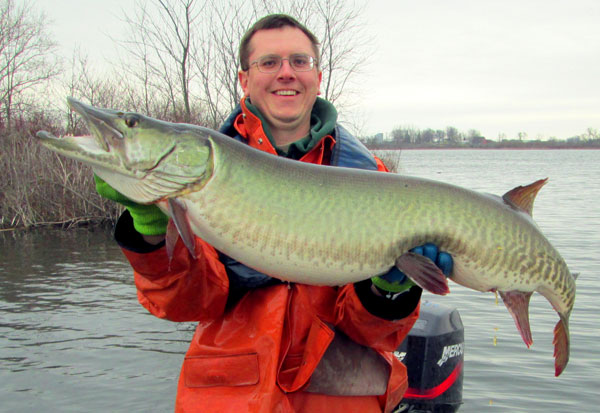 Muskellunge (Esox masquinongy; hereafter referred to as Muskies) are native to Canada and the United States including the Great Lakes, upper Mississippi River and Ohio River drainages. Muskies were native to Indiana’s tributary rivers connected to the Ohio River, but habitat changes nearly eliminated all natural populations. Efforts to re-establish muskies began in 1974. Today, 10 muskie populations in Indiana are maintained by stocking hatchery-raised fish.

Muskies are some of the largest fish in Indiana, and anglers usually release the muskies they catch, prizing them more for their trophy size and challenge to catch rather than their edibility. Although growth of older male muskies is slow, and few ever reach 44 inches, females typically reach 36 inches at age 7 and 44 inches at age 12. Under the right conditions, female muskies can grow longer than 50 inches, weigh more than 40 pounds, and live more than 20 years. The Indiana state record was caught in 2002 at James Lake (Kosciusko County) and weighed 42 pounds, 8 ounces. 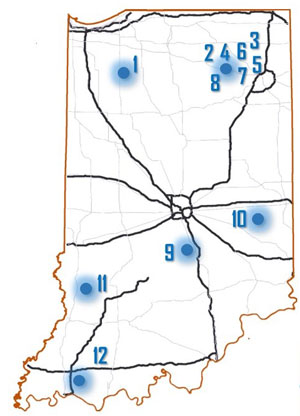 Surveys of the best lakes for Muskie fishing

This survey has been designed as a way for anglers to report muskie fishing trip details to the Indiana DNR. Fisheries biologists use this information to monitor fisheries and guide future management decisions.

Indiana DNR fisheries biologists have been PIT (Passive Integrated Transponders) tagging muskies dating back as far as 2005 in Webster Lake. Find out more information about the Muskie tagging project.