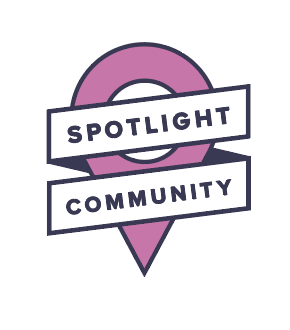 (Indianapolis, IN) On December 11, 2020, the Indiana Arts Commission voted to approve Fort Wayne, Goshen, Kokomo, and Wabash for Spotlight Community recognition as part of the Creative Community Pathway program.

The Creative Community Pathway is a roadmap for any Indiana community to start, focus, or deepen arts and culture-based strategies to grow community wellbeing. As a capacity-building program, the Pathway aligns local creative assets – artists, arts and culture strategies, partners, and resources – to support a community’s unique goals and dreams. Simultaneously, it organizes a sustainable, healthy creative environment for artists and cultural organizations.

About the Spotlight Communities

Areas of Downtown Fort Wayne located along the canal route were central to trade and community gathering, including its arts district. Specifically, the area now recognized as Freimann Square was home to Fort Wayne’s first theater – which featured public shows for a small fee. In 1853, the Colerick Opera House was opened. This was the first fully equipped theater in the state of Indiana. The first professional company to visit Fort Wayne was Sanford's New Orleans Opera Troupe in 1855, and in 1856, P.T. Barnum treated the town to an appearance of his celebrated attraction, Tom Thumb. After the Civil War, theatre interests improved, and Fort Wayne came to be known as a "good theatre town." Well-known performers such as Edwin Forest, Laura Keene, and Edwin Booth came to the Colerick Opera House. The most common shows of the time were those of the minstrel troupes and burlesque, with occasional productions of perennial favorites: "Uncle Tom's Cabin," "The Black Crook," and "The Hidden Hand."

“Fort Wayne is a rare treasure of creating wealth. Arts organizations collaborate to bring an astounding number of opportunities to children and families in the region,” said Anna Tragesser, Indiana Arts Commission Artist and Community Services Manager. “Regional leaders are sharp – they know there’s opportunity for tourism and downtown development as a strategy for near-term growth.”

Today, the community continues to see much of this history reflected in the arts campus and community. While the Colerick Opera House no longer exists, the Arts United Center is home to theatrical productions, dance concerts, conductor workshops, municipal events, and other community functions. The community’s trading roots have grown to include Sweetwater, the largest distributor of musical technology in the nation. As time passes, the community will continue to adapt and evolve – and Arts Campus Fort Wayne will proudly stand at the forefront of arts and culture activity in Fort Wayne and Northeast Indiana.

Residents and visitors alike know Downtown Goshen as the place to be when they are looking for a cozy nook to grab a warm drink, an authentic gift for a loved one, or a place to engage in creative play. But it didn’t always look like the bustling neighborhood it is now.

"Goshen’s arts and culture scene is both organic and concentrated. For a community of its size, it has an impressive roster of high quality, accessible, and diverse experiences for visitors and residents, as well as a deep well of knowledge, spaces, equipment. and creative peers for local artists to draw from,” stated Tragesser.

The downtown district slowly gained its reputation piece by piece, going back to the mid 1980s, when Goshen resident David Pottinger and his wife Faye Peterson Pottinger began restoring buildings along Main Street. David and Faye were awarded the Dorothy Richardson Resident Leadership Award by Neighborworks America in 2010 and the Larry A. Conrad Civic Service Award from the Indiana Association of Cities and Towns in 2014 for his work downtown.

With every restoration came artists and entrepreneurs who worked hard to fill the newly remodeled properties. In 1998, a group of pottery artists came together to form a studio space, and they formed the Clay Artists Guild. In later years other artists would join and create four other guilds, all of which are now housed in the Millrace Center, behind the city’s farmers market. In 2005, the city started the Facade Grant Program, which promotes the maintenance and rehabilitation of central business district properties, pushing forward opportunities for building owners to breathe new life onto their properties.

Goshen’s artistic influence grew organically over the years, thanks in part to the artists guilds, the city’s sense of entrepreneurship and Goshen College, a liberal arts college south of the downtown district. Artists who had left a city with vacant buildings upon graduating college returned to a vibrant community years later, and some decided to move back.

A momentum began building in the mid to late 2000s; that’s when a group of community members came together and planned Frist Fridays, a series of monthly events with the aim of offering free family-friendly activities. Two residents, Gina Leichty and Eric Kanagy, started Downtown Goshen, Inc., a non profit that to this day promotes the locally-owned businesses in the downtown district and organizes First Fridays. Downtown Goshen, Inc. is a Community Member of Main Street America.

Kokomo has long thrived in the automotive industry, developing as a community of hard workers ready to roll up their sleeves and get the job done. However, during the economic downturn over a decade ago, the community took a hard hit, at one point being designated one of the fastest dying cities in America.

“Kokomo knows its time has arrived – its grit and resolve to make itself is showing up through city leadership’s commitment to affirming a maker identity, aligning partners, and designating resources toward its creative community movement,” said Tragesser. “Kokomo’s pride is infectious, and its sense of self is empowering to both residents and visitors.”

Today, a stroll through the Kokomo reveals a rich, vibrant art scene with unique and accessible installations. With multiple art galleries within walking distance, alleys featuring local artists’ creations, spaces for outdoor performances and so much more, Kokomo is not the city it was a decade ago. It is now a “Maker City.” In fact, residents say they chose Kokomo for its unique and vibrant art and maker culture. But that doesn’t mean the community has forgotten its automotive heritage. Instead, they embrace and celebrate it, with a key installation being a replica of the first car built by one of Kokomo’s most influential inventors, Elwood Haynes.

That history is recognized not only in art, but in preserving existing structures. Over 500 new housing units have been built in the last few year alone, many in renovated spaces. With new places to live in the downtown area, the community has focused on transforming the Riverwalk District, adding an outdoor amphitheater and connections to the waterway with nearby neighborhoods.  New residents are citing the growing arts scene as the reason for moving to Kokomo. While it is referred to as the Kokomo Downtown District, it is recognized as the premier gathering place for the community to enjoy arts and cultural activities of all kinds.

Residents and visitors alike gather downtown to enjoy fresh food from local restaurants or to buy fresh produce from the Kokomo Downtown Farmers Market. On a warm, sunny day, the alleys fill with people enjoying their lunch or a conversation with friends. Foster Park becomes a space for residents and visitors to enjoy free entertainment by bands from around the country.

“Wabash is a committed, collaborative community with a genuine arts and culture heritage. The vaudeville history of the community is a compelling narrative that connects to Wabash’s strong arts assets today – the Honeywell Center and its sister projects,” Tragesser said. “With roots and a future in performing arts leadership, Wabash will make, sing, and dance its way into its vision for a vibrant, inclusive downtown.”

The tipping point was in 2012 with the city-wide adoption of “Public Art Master Plan: A Roadmap for Creative Placemaking” with an emphasis on Downtown District Development. The District was beautified by a strategic plan to revitalize Downtown as the “hub” of the community. Benches lined the streets to encourage pedestrians. A neglected alley was transformed into a gorgeous art walk. First Fridays became a monthly street festival with thousands in attendance.

In 2014, the Indiana Office of Community and Rural Affairs designated the City of Wabash a Stellar Community. Wabash used the grant for significant improvements to the District including a $1.3 million facade program, Rock City Loft affordable senior housing, and Eagles Theatre renovation. By the end of the grant, Wabash was recognized as one of the premiere examples of rural downtown development.

In 2016, Small Business Revolution on Main Street selected Wabash as its season one winner, from over 10,000 cities coast-to-coast. The city received a $500,000 branding and business assistance package from Deluxe Corporation. The series aired on Hulu with celebrity host and entrepreneur (and shark from Shark Tank), Robert Herjavic. A national audience started flocking to Wabash, especially the District, after seeing the charm of Wabash. Some of them even moved to Wabash, including a dulcimer maker that left his life in California to buy a storefront in the District!

Wabash has since mentored numerous communities including Huntington, Marion, Columbia City, Portland, and Edinburgh. The Wabash Cultural District offers a speakers’ bureau on “Creating and Implementing a Master Plan for Public Art.” Wabash has even presented at the Great Lakes Main Street Conference hosted by the Office of Community and Rural Affairs.

Creative communities have unique, authentic arts and cultural identities that build upon history and long-standing traditions of the community.

What's next for Spotlight Communities?

Fort Wayne, Goshen, Kokomo, and Wabash have proven they are ready to take it to the next level.

Communities along the Creative Community Pathway are supported by a diverse team of eager experts and peers from around the state, including:

Each member of the Support Team brings a wealth of knowledge in their own field to this process. Individually and as a group, they’ve spent significant time getting to know these communities. As consultants, they've reflected back to each community areas in which the community is a leading innovator, and the aspects the community can grow. They’ve coached each community in ways their thriving arts and cultural scene can help the community reach its goals.