WHAT IS SOLAR ENERGY?

Solar power is energy from the sun that is converted into thermal or electrical energy. Solar energy is the cleanest and most abundant renewable energy source available, and the U.S. has some of the richest solar resources in the world.

Solar technologies can harness this energy for a variety of uses, including generating electricity, providing light or a comfortable interior environment, and heating water for domestic, commercial, or industrial use.

HOW DOES SOLAR WORK? 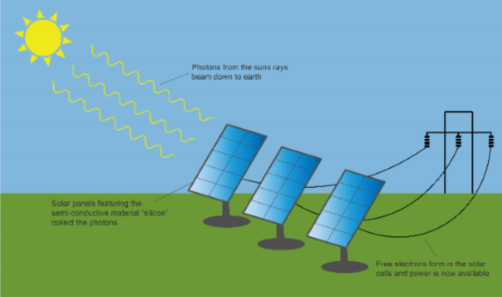 Photovoltaics generate electricity directly from sunlight via an electronic process and can be used to power anything from small electronics such as calculators and road signs up to homes and large commercial businesses. Solar heating & cooling (SHC) and concentrating solar power (CSP) applications both use the heat generated by the sun to provide space or water heating in the case of SHC systems, or to run traditional electricity-generating turbines in the case of CSP power plants.

Solar energy is flexible: it can be built as distributed generation (located at or near the point of use) or as a utility-scale solar power plant (similar to traditional power plants). Both of these methods can also store the energy they produce for distribution after the sun sets, using energy storage pairing.

In Indiana, solar power continues to grow. In 2018, solar represented less than 1% of Indiana’s fuel mix but that number will increase as more solar farms are interconnecting to the grid and being sited.. Approximately 1,357 MW of solar resources over the next five years are planned to be in service in Indiana. To learn more about solar energy, check out www.energy.gov or www.seia.org.