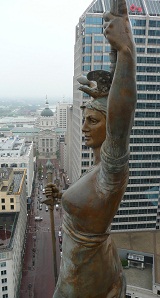 Since the placement of the Victory sculpture atop the Indianapolis Soldiers and Sailors Monument, early fall 1893, it has withstood the buffeting of winds, as well as the variety of Indiana elements: piercing sun, pounding rain and hail, freezing sleet and snow. In the 1940s and 50s, workmen – steeplejacks, really – would emerge from a window on the observation level of the monument, raise themselves via rope to the base of the sculpture, transfer to a small rope swing attached to a block and tackle in the vicinity of the sculpture’s left shoulder, raise themselves – hand over hand – until they reached a point midway between the shoulder blades, remove a metal plate entry door to the sculpture and climb inside.

The workmen, mid-century, reported water infiltration of the sculpture that resulted in a half-inch of ice coating of the interior steel support lattice work during the winter. News reports from the era indicate the workers cleaned, tightened and painted the interior of the sculpture “every three or four years.” In 1957, more extensive repairs that included the exterior of the Victory sculpture were performed.

In the late 1980s, a large-scale project was undertaken to repair the entire monument, including interior renovations. It was then that gold leaf was applied to the sculpture’s torch.

In 2009, contractors for the Public Works Division of the Indiana Department of Administration, noted water infiltration was affecting the Victory sculpture, as well as limestone carvings below the observation deck. In January, 2011, when it was determined that damage had reached a critical level, a new project was initiated that required removal of the sculpture for complete restoration and repair. Scaffolding was built to encompass the 38-foot sculpture and exterior steel supports were attached to the bronzework to maintain its rigidity during removal. On April 23, about 6:30 p.m., the sculpture was removed after 117 years in place. Its return to the top of the monument is targeted for November 4, in time for the annual Circle of Lights event and the 2012 Super Bowl.

Story of the Monument’s Limestone Sculptures

Keys to the Soldiers and Sailors Monument Project