From the outset the Indiana Soldiers and Sailors Monument was envisioned as a great historical and artistic masterpiece. Just how that vision was to be achieved was sometimes a matter of opinion. Some ideas were rejected with more vehemence than others.

An ambitious plan for artworks to enhance the Monument was part of architect Bruno Schmitz' plan. With an eye to the cost, the Monument Commission sent a letter in December 1889 to the Indiana Senate and Congressional delegation in Washington, D.C. asking for a federal appropriation of $60,000 to cover the cost of "emblems and statuary" to embellish the monument. The response evoked a familiar theme: the delegation, although in support of the project, said that because the monument was a state project, there could be no federal dollars appropriated. 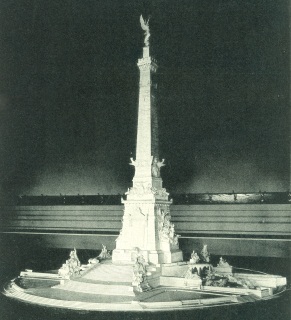 George J. Langsdale, president of the Monument Commission, was editor and publisher of newspapers in Greencastle and Sullivan. The Monument Commission reports, attributed to Langsdale, were often filled with gems of artistic prose. Writing about the impressions of the unfinished monument on visitors to Indianapolis and perhaps reflecting ruefully on the federal refusal to contribute monetarily, he wrote: “This monument will become the recognized symbol of American patriotism and valor, and Indianapolis, the mecca of union soldiers… In this respect the good influence of the Monument will be beyond its price.”

The Commission rejected a proposal for drinking fountains of artesian water as part of the monument, although it was deemed that the cost would not be great and the artesian water would be beneficial to all who drank.

Rejected with greater verbal embellishment: The committee received a model of the head of Medusa (a mythical Greek figure with snakes for hair), as well as some “nondescript birds”, from an unnamed sculptor of Berlin under the supervision of Bruno Schmitz. Deeming the sculptures inappropriate, Commission President Langsdale penned a definitive statement:

“We are seeking an artist capable of producing creations of his own, with reference to our country, our times, conditions, customs, thoughts, religion, science and warfare… and with the ambition to do it. We want a modern master…not a copyist. The state Soldiers and Sailors Monument of Indiana should symbolize Indiana and achievements of her people, not Greece and her past.

“The Board has labored to have the Monument meet the highest mechanical and artistic requirements… and the name of Indiana co-extensive with the knowledge of art and synonymous with the best culture. No longer will the dialect of the ignorant be paraded as the leading characteristic of Indiana(!)”

When the commission finally engaged the capable artist they sought in the person of George T. Brewster, Indiana artist T.C. Steele, as a member of the commission's Board of Experts, wrote of Brewster's design for the "crowning figure":

“In the figure we find a simplicity and harmony of outline and a grace of movement, combined with vigor and strength superior to any of the others. …its expression in the simple grandeur and harmonious strength of the figure is a guarantee that the artist is in full sympathy with the object and purpose of the monument.”