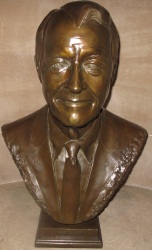 Robert Dunkerson Orr was born on November 17, 1917 in Ann Arbor, Michigan. His mother, Louise Dunkerson Orr, had travelled to Michigan to give birth with the aid of their family physician, who had just recently moved. As such, Robert Orr was a resident of Indiana his entire life, and spent his childhood in Evansville with his family. Orr attended Evansville public schools, finishing up his high school years in Connecticut at the Hotchkiss Preparatory School. Orr attended this prep school with the hope that it would aid him in being accepted to an Ivy League university. It paid off, as Orr was accepted to Yale University, where he earned his BA in history in 1940. After graduating, Robert Orr was accepted to the Harvard University Graduate School of Business Administration. Before he could complete his graduate education, Orr enlisted in the United States Army to fight in World War II. Following the war, Orr left the military and returned to Evansville, where he helped with the management of his family business, the Orr Iron Company.25

During his time in the U.S. Army, Orr was married to his first wife, Joanne “Josie” Wallace (1944). They had three children. After returning to Evansville and the family business, Robert Orr became involved in the Vanderburgh County Republican politics. As he became an important figure in the business, political and civic life of Evansville, Orr gained recognition from the party, earning him a nomination and election to the Indiana State Senate in 1968. After serving one term in the State Senate, Orr was elected to run for lieutenant governor as the running mate of Otis Bowen. The Republican ticket won the election in 1972, and the two were reelected again in 1976.26

As the 1980 gubernatorial election approached, Robert Orr received the approval of Governor Bowen to run as his successor to the office, and Orr easily received the Republican Party’s nomination for the position. Running on the slogan, “Let’s Keep a Good Thing Going,” Orr and his running mate, John M. Mutz defeated the competition by the largest margin in the history of Indiana gubernatorial elections (57.7% to 41.9%). Orr entered office in January of 1981 when the state and country were in the midst of a recession, and Indiana was facing a huge deficit. As a result, Orr focused much of his attention on supporting several economic development and government reorganization programs. In 1982, the deficit was continuing to grow and Orr called the general assembly in for a special session to address this issue. That session resulted in the increase of state income and sales taxes.27

Robert Orr was only the second governor in Indiana state history who was eligible to be elected for a second term (the first was his predecessor, Otis Bowen). The focus of Orr’s second term continued to be economic development, but he also displayed a strong commitment to education. He introduced two educational plans, the “Prime Time” program and the “A+” program, both of which were passed. They helped to reduce class sizes and increase the accountability to public education by measuring results and recording performance of both students and teachers. In seeking economic development, Orr worked to bring foreign investors into the state.28

At the completion of his second term, Robert Orr was appointed by President George H. W. Bush to serve as the U.S. ambassador in Singapore. He filled this position for three years, retiring from public service in 1992. In 2000, Robert and Josie Orr were divorced and on January 20, 2001, Orr remarried Mary K. Davis.29 Robert Orr died on March 10, 2004 at the age of 86. The cause of death was heart arrhythmia, after having been admitted to the hospital for kidney surgery.30 He lay in state in the Indiana State House on March 16th, and was buried at Crown Hill Cemetery in Indianapolis.31

This bust was commissioned by the Rotary of Evansville, of which Orr had been a member before his election as governor. Sculptor Don Ingle of Evansville was selected as the artist, and the total cost for production was $6,000. Commissioned while Orr was still in office, he made two separate trips to Evansville in order to sit for the bust. Ingle also requested that formal portraits of the governor be taken for his reference. The mold took Ingle 3 months to complete, and this was sent to a foundry in Lancaster, Pennsylvania. The bust was presented to Governor Orr in 1988 in a ceremony which took place at the Indianapolis Athletic Club. When sent to the foundry, two busts were created: one for the Indiana Statehouse and one for the Orr Academic Building at the University of Southern Indiana in Evansville.32

Don Ingle was a life-long resident of Evansville and had been a friend of Robert Orr in their youth. Ingle is known for his busts of Orr, Don Powers, Purdue University’s first band director Paul Spotts Emrick, and other famous Hoosiers.33