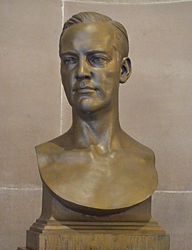 Matthew Empson Welsh was born on September 15, 1912 in Detroit, Michigan. His parents were both natives of Indiana, and they moved their family back to Brownstown, Indiana during World War I. In 1926, the Welsh family moved to Vincennes, Indiana. Welsh graduated from Lincoln High School in Vincennes in 1930, then attended the University of Pennsylvania followed by the Indiana University School of Law and the University of Chicago Law School. He graduated from there in 1937. That same year, Matthew Welsh married Mary Virginia Homann and was admitted to the Indiana bar.17

Welsh’s political career began in 1940, when he was elected to a seat in the Indiana House of Representatives. He was reelected in 1942, and resigned the next year in order to serve as an officer in the U.S. Navy during World War II. Welsh returned to Vincennes in 1946, taking up his law practice until 1950, when President Harry Truman appointed Welsh to the position of U.S. Attorney for the Southern District of Indiana. Welsh resigned from this position in 1952, and ran successfully for the Indiana Senate in 1954. Welsh served as the Democratic floor leader in 1958-59.16

Welsh began his run for the Governor’s office in 1956, when he came very close to receiving the Democratic nomination for governor. In 1960, Welsh was successful in receiving the nomination and beat Republican Crawford F. Parker in the election. When Matthew Welsh entered office, he faced a serious budget crisis, and he is well known for his initiatives to solve the budget crisis. The 1961 legislature passed three of Welsh’s financial initiatives. The 1962 legislature was unable to pass a tax program or budget during regular session, and so Governor Welsh called for a special session on March 12, 1963 in order to address the budget issue. The special session ultimately passed the “2-2-2 Plan,” which created a 2% retail tax, a 2% income tax on individuals and a 2% corporate tax on corporations.17 Along with these financial initiatives, another legacy of Welsh’s time as Governor was his focus on making state government more efficient. During his time in office, Welsh created the Indiana Department of Administration (IDOA).18

Arguably, Matthew Welsh’s greatest legacy as governor of Indiana was his commitment to civil rights for African Americans. In 1961, Welsh pushed a law through the legislature which created the Fair Employment Practices Commission. He issued an executive order on December 12, 1961, that required a nondiscrimination clause in all state contracts.19 In June Welsh issued another executive order aimed at ending racial discrimination in businesses licensed by the state. Intended to end discrimination in “public parks, forests, museums, libraries, meeting rooms, health services and any other public facility owned or operated by the state,” the executive order predated the U.S. Civil Rights Act of 1964.20

Another significant event in Matthew Welsh’s term as Governor occurred during the 1964 presidential election. Governor George Corley Wallace of Alabama announced that he was going to campaign for the Democratic nomination, against the incumbent President Lyndon B. Johnson, also a Democrat. Matthew Welsh saw “obvious overtones of racial intolerance” in Wallace’s campaign, and he thought that a Wallace win in the Democratic primary would be damaging to Indiana’s political atmosphere. Welsh thought that could set the state back in the strides that Indiana had made towards Civil Rights (most notably his Civil Rights Act of 1963). In order to combat and prevent these effects, Governor Welsh ran against Wallace in the primary, in the place of LBJ who was not running in primary elections as the incumbent. Welsh’s success in this endeavor kept Indiana’s 51 delegates from going to Wallace the Democratic National Convention, at which Welsh gave the delegates to LBJ.21

Following his term as Governor, Welsh was constitutionally prohibited from seeking a second term, and he returned to his law practice in Indianapolis. In 1965, President Johnson appointed him as the part-time chairman of the U.S. Section of the International Joint Commission for the United States and Canada. Welsh ran for Governor again in 1972, but was defeated by Otis R. Bowen. The tax initiatives which Welsh supported during his first term were brought up against him throughout the campaign. Welsh continued to practice law in Indianapolis until his death at the age of 82. He is buried at Memorial Park Cemetery in Vincennes.22

Daniel Edwards was born in La Porte, Indiana in 1965. He is known for sculpting the Workers’ Memorial Sculpture at the Indiana Government Center.24