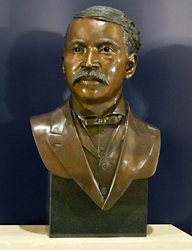 James Sidney Hinton was born on December 25, 1834 to free black parents in Raleigh, North Carolina. His father, John Cook Hinton, was a well-regarded sky-light manufacturer. His mother, Hannah (Mitchell) Hinton, was active in the Methodist Episcopal Church and a respected piano teacher.1 Around 1848, the family moved west to Terre Haute, Indiana. James Hinton attended a variety of schools, first a subscription school in Terre Haute organized by African Americans. In order to continue his education, Hinton traveled to Hartford, Indiana and Greenville, Ohio to attend school.2

Hinton made a living in a variety of professions, including working as a teacher, husker-wagon driver, and barber.3 In 1862, he moved to Indianapolis and opened a “real estate and intelligence office.”4 He participated in numerous fraternal organizations, including the Odd fellows and Prince Hall Masons. Hinton was very involved in the Methodist Episcopal Church and served as a trustee of Wilberforce University.5 Hinton married Eliza J. Mitchell, a widow from Indianapolis, in 1862.6

At the outbreak of the Civil War, Blacks were prohibited from serving in the military in Indiana. Hinton volunteered for military service in Massachusetts, serving as a recruiter for the Massachusetts 54th and 55th United States Colored Regiments.7 He returned to Indiana in 1863 to assist with the organization of the Indiana 28th United States Colored Troop, forming in Indianapolis.8

Life for African Americans in Indiana was not easy. Following the Civil War, Black citizens still could not vote in local, state, or national elections, send their children to public schools, testify in a trial involving white citizens, or serve in the Indiana Militia.9 Despite this discrimination, Hinton made strides for equality for the African American community. Following the Civil War, Hinton served as a promoter for the Republican “party of Lincoln” to African American voters in Tennessee, Georgia, Alabama, Mississippi, and Indiana.10 During these travels, Hinton advocated for education for Black children, and asked for fair shares of public school funds to be provided to schools and teachers.11 He served as a presidential elector-at-large and was one of two Black delegates to the National Convention in 1872. In 1874, he was the first African American to hold statewide office when he was appointed Trustee of the Wabash and Erie Canal.12

Most notably, Hinton was the first African American legislator to serve in the Indiana General Assembly. The Fifteenth Amendment to the United States Constitution, which allowed African American men to vote, was ratified in 1870.13 Only ten years later, in 1880, Hinton was elected to represent Marion County in the House of Representatives.14 At his election, the Indianapolis Leader proclaimed, “thirty years ago, the Indiana Legislature was engaged in concocting brutal laws to prevent the entrance of colored people into this state. Now a member of the race then proscribed, is a member of the Legislature. Time sets all things right.”15

After his term in the General Assembly, Hinton continued to work on behalf of the African American community and Republican Party. A skilled orator, Hinton was described as a man with an “erect and stately carriage, and is possessed of easy, though dignified manners; is graceful, and is also a fluent and entertaining conversationalist and public speaker.”16 He died on November 6, 1892 after attending a political rally in Brazil, Indiana.17 Hinton was remembered as living “a life of such prudence, industry, and economy.”18 An obituary proclaimed him “prominently identified with the Negro’s progress... his race’s chief representative… more widely known than any of his contemporaries.”19

The process of funding this bust started with the Indiana General Assembly, which passed House Enrolled Act 1818 (2007). This legislation mandated the commission of a permanent black history display in the Indiana Statehouse.20 In accordance with this Act, the Indiana Department of Administration, Indiana Historical Bureau and Indiana Black Legislative Caucus decided that a public art legacy project should be installed, bringing more diversity to the Indiana Statehouse sculpture collection.

Jon Hair was selected to create two traditional bronze busts to celebrate the public service of James Sidney Hinton and Julia May Carson. These busts were installed on January 16, 2014 as part of a Dr. Martin Luther King, Jr. celebration at the Indiana Statehouse.21

Jon Hair is a well known sculptor with over eighty major public work commissions. He earned degrees from Ohio State University and Columbus College of Art & Design. Hair has completed sculptures for the U.S. Olympic Committee, The Academy of Television Arts & Sciences, the cities of Beijing and Shanghai, and thirty-five American colleges. In Indiana, his work can be seen on the campus of Purdue University.22

6 - Land, 25; Alan F. January and Justin E. Walsh, A Century of Achievement: Black Hoosiers in the Indiana General Assembly, 1881-1986 (Indianapolis: The Select Committee on the Centennial History of the General Assembly and the Indiana Historical Bureau, 1986), 19.

15 - Indianapolis Leader, January 8, 1881. This quote refers to the Article XIII in Indiana’s 1851 Constitution, which prevented the migration of African Americans into the State. This article was voided in 1866. See “Indiana Constitution of 1851,” Indiana Historian (June 2002), found at http://www.in.gov/history/files/const1851.pdf.