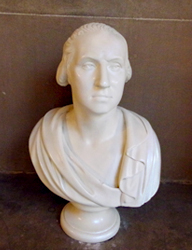 First President of the United States

George Washington was born in 1732 into a Virginia planter family. Growing up, he learned the morals, manners and body of knowledge requisite for an 18th century Virginia gentleman.

He studied surveying and learned the basics of the military arts. When he was 16, he helped survey land in the Shenandoah Valley. He was commissioned a lieutenant colonel in 1754. He went on to fight early battles in the French and Indian War.

After his initial war experience, Washington managed his lands around Mount Vernon and served in the Virginia House of Burgesses. He married a widow, Martha Dandridge Custis, and devoted himself to a busy life on an American plantation.

When the Second Continental Congress assembled in Philadelphia in May 1775, Washington, one of the Virginia delegates, was elected Commander in Chief of the Continental Army. On July 3, 1775, at Cambridge, Massachusetts, he took command of his poorly-prepared troops.

Washington led the new nation in war. His army faced difficult challenges. Soldiers were poorly trained and equipped. They lacked adequate clothing and supplies. Their winter at Valley Forge presented the most brutal conditions ever faced in the history of the U.S. Army.

The war ended in 1781 with the surrender of Cornwallis at Yorktown. Glad to be free of official duties, Washington retired to his estate at Mount Vernon.

However, the new nation was not operating well under the Articles of Confederation. Washington became a primary force in steps that led to the Constitutional Convention at Philadelphia in 1787.

When the new Constitution was ratified, the Electoral College unanimously elected Washington President. As the nation’s first chief executive, he set precedents which have last more than 200 years.

He avoided another war with Great Britain and guaranteed a decade of peace and profitable trade by securing the Jay Treaty in 1795.

Washington’s Farewell Address was an influential primer on republican principles and a warning against partisanship, sectionalism, and involvement in foreign wars. He retired from the presidency in 1797 and returned to his home in Mount Vernon. There he enjoyed domestic life and managed a variety of enterprises.

Washington sought to use the national government to preserve liberty, improve infrastructure, open the western lands, promote commerce, found a permanent capital, reduce regional tensions and promote a spirit of American nationalism. At his death, Washington was called "first in war, first in peace and first in the hearts of his countrymen.”

He is consistently ranked among the top three presidents of the United States, according to polls of both scholars and the general public.

This is a copy of an original bust created by French sculptor Jean Antoine Houdon in 1785 at George Washington’s home. It is believed that Washington posed for the original sculpture. This bust was used as the primary image of Washington for the Bicentennial Celebration of the first president’s birthday in 1932. The inscription on the rear of the bust refers to the Bicentennial Commission what was formed to oversee the celebration.

Jean Antoine Houdon was born March 20, 1742 in Versailles. He was a sculptor in the neoclassical style and is considered to be the most famous sculptor of the latter half of the 18th century in France. He was famous for his busts and portrait statues of inventors, philosophers and political figures of the Enlightenment. He also created sculptures of other famous American founding fathers, including Benjamin Franklin and Thomas Jefferson.