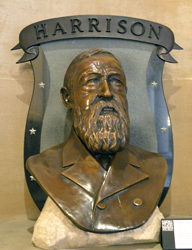 23rd President of the United States

Benjamin Harrison was born in 1833 to a family already distinguished in American history. His great grandfather, Benjamin Harrison V, was a signer of the Declaration of Independence and his grandfather, William Henry Harrison, was the first Governor of the Indiana Territory and the 9th President of the United States. After graduating from Miami University, Harrison and his first wife, Caroline Scott Harrison, moved to Indianapolis where he began his law practice (1853).

Harrison was a fervent supporter of Abraham Lincoln, and he served with the Union during the Civil War. He was brevetted Brigadier General in recognition of his gallantry while serving under General Sherman’s command. Until his death in 1901, friends and supporters referred to Harrison as “The General.”

In 1881, Harrison was elected to the United States Senate; in the summer of 1887, he returned to Indianapolis. It was in his home on Delaware Street that he accepted the nomination of the Republican Party as candidate for President of the United States. The election of 1888 was decided in the Electoral College with Harrison defeating Grover Cleveland.

Harrison was an advocate for veterans’ benefits, anti-trust legislation and the promotion of American goods. Harrison encouraged the display of the American flag at government offices, schools and set aside land later to become Sequoia and Yosemite National Parks. Following the death of his wife Caroline in the White House and his defeat for re-election, Harrison returned to Indianapolis to resume his law practice. He married Mary Lord Dimmick in 1896. Harrison died in 1901 and is buried at Crown Hill Cemetery. 101

During the first Regular Session of the 115th General Assembly (2007), the House Enrolled Act No. 1818 was passed. Section 2 of this act called for the commission and placement of the bust of President Benjamin Harrison (Section 1 of the Act called for consultation with the Indiana Historical Bureau and the Indiana Arts Commission to assist in the design of the bust). July 1, 2008 was the date by which plans for the bust would be submitted to the Legislative Council for approval.102 After such approval, the bust was produced. The unveiling ceremony took place on Tuesday, November 18, 2008, led by Governor Mitch Daniels and Harrison’s great-great-grandson Kimball Morsman.103

Richard Peglow obtained his initial art-and-design aptitude from his father in LaPorte, Indiana, where he was born and raised. After attending several art programs, including the Art Institute of Ft. Lauderdale, Herron School of Art, University of Notre Dame, and an MFA degree from Northern Illinois University, he returned to Indianapolis to continue creating art. Employers included the Indianapolis Museum of Art, and the National Art Museum of Sport.

In early 2008, Peglow procured the Benjamin Harrison commission, which made it the first project to be complete in his newly acquired 100+ year-old studio, located in Kirklin. In the planning of the Benjamin Harrison sculpture, Peglow was interested in reflecting the significance of Harrison’s contribution to the State of Indiana and to the United States. The Harrison bust represents both a traditional bronze portrait combined with design elements inspired by the graphic mass merchandising of the 1888 Harrison presidential campaign.104

SinCerus Bronze Art Center is a full service fine arts foundry and consulting company on the northeast side of Indianapolis. The Center was founded by Tom and Karen Poyser. Tom, a former engineer, marketing executive and patron of the arts, teamed with his wife, Karen, an educator, to establish a company focused on the business of art.105