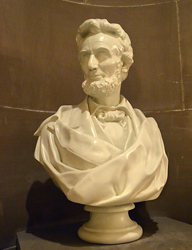 16th President of the United States

Much has already been written and is known about Abraham Lincoln’s life, but the focus here will be on Lincoln’s time as a Hoosier, growing up in Indiana. Abraham Lincoln was born on February 12, 1809 near Nolin Creek in Kentucky. He was the son of Thomas and Nancy Hanks Lincoln, who were married in Kentucky on June 12, 1806. Lincoln had a sister, Sarah, who was two yours older than him and a younger brother, named Thomas after his father, who died shortly after he was born.83

Lincoln’s family moved to Indiana in 1816, when Lincoln was seven years old. Incidentally, this was also the year in which Indiana became a state. The Lincoln family moved to Spencer County, which was formed earlier that year as well. There are varied accounts/reasons as to why the family planned the move. These reasons include conflict over land titles in Kentucky and the need to get away from slavery.84 The family settled on the banks of Pigeon Creek, where Thomas Lincoln built a cabin. Abraham Lincoln remained in Indiana from 1816-1830, from the time that he was seven years old to when he was 21 years old. In total, this would be one-fourth of Lincoln’s life, and a significant time in the development of any individual.85

Multiple important events in Lincoln’s life occurred during his time in Indiana. Perhaps the most important of these was the death of Lincoln’s mother, Nancy Hanks, on October 5, 1818. She was buried on a knoll close to the cabin.86 Nancy Hanks Lincoln was the victim of “milk sickness,” which resulted from the drinking of poisonous cows’ milk. This was unknown at the time, and was referred to as the “dread malady” or the “curious illness.”87 A second, related event which was important to Abraham Lincoln occurred in December of 1819, when Thomas Lincoln married Sarah Bush Johnston of Kentucky. Lincoln’s stepmother moved into their cabin, bringing with her three children (two girls and one boy). Neighbors and friends of the Lincoln family have remembered that the two families joined together peacefully, and that Sarah Johnston was a good stepmother.88

Lincoln attended school in Spencer County at various intervals between 1820 and 1824. Though he only attended school at irregular intervals, Lincoln learned to read and write. Lincoln was employed in 1825 to operate a ferry boat at Anderson Creek. Both Lincoln and his sister were also employed by neighbors for occasional work, mostly labor.89 While working as a ferry boat operator, Lincoln had his first contact with the law when he was charged with operating a ferry boat without a license. Lincoln served as his own attorney, and won the case with the defense that he had not actually ferried people across Anderson Creek into Kentucky, but only to the middle of the creek, which would not require him to have a Kentucky license.90 Thomas Lincoln had worked as a farmer and carpenter in Kentucky, and he continued this work in Indiana and taught Abraham those trades as well.91

On August 2, 1826, Lincoln’s sister married Aaron Grigsby. Just two years later, on January 20, 1828, she passed away and was buried in the Pigeon Creek Baptist Church Cemetery. This is the church which the Lincolns attended while they lived in Indiana, and Abraham worked as a janitor there for a short time.92 Another important event in Lincoln’s life occurred in December of 1828 - he took a trip to New Orleans along the Mississippi River with his friend Allen Gentry. It was during this trip that Lincoln and Gentry witnessed the slave trade in action, when they stopped by an auction. After witnessed the sight, Lincoln is reported to have said, “If I ever get a chance to hit that thing (slavery), I’ll hit it hard.”93

During his last year in Indiana, Lincoln worked as a store clerk and made frequent trips to Rockport and Boonville. On these trips, he met many important figures of these areas, including the lawyer, John Pritcher, who he borrowed law books from.94 On March 1, 1830, the Lincolns packed up and moved to Illinois. Their last stop in Indiana was in Vincennes, which had been the territorial capital. There, they saw the William Henry Harrison home and a brand new cathedral (now The Old Cathedral Library). From Vincennes, they crossed the Wabash into Illinois.95

Lincoln returned to Indiana in October of 1844, as a Henry Clay elector traveling as an orator, canvassing on behalf of Clay’s presidential campaign. By this time, he was married to Mary Todd (1842). While in Indiana, Lincoln delivered addresses at Bruceville, Vincennes, Washington, Boonville and other points in Southern Indiana, culminating in his return to Gentryville and Rockport, Spencer County. It was during his time as an elector that Lincoln established his reputation as an orator.96 Following his trip, Lincoln wrote a poem about his return, titled “Memory.”97

Multiple collections of Abraham Lincoln artifacts, memorabilia, photographs, manuscripts materials, etc. are held by archival repositories in Indiana, including the Indiana Historical Society. These collections are open to the public and to researchers. Detailed information about the Lincoln holdings of the Indiana Historical Society can be found in the “2nd Floor Busts” binder of the Statehouse Tour Office Library.

The Indiana Statehouse's plaster bust of Lincoln was patented June 3, 1862. Thomas Dow Jones' original bronze sculpture was cast in 1861 and is believed to be one of the earliest depictions of a bearded Abraham Lincoln. Thomas Dow Jones was commissioned by the leading Republicans of Cincinnati to sculpt a portrait bust of President-Elect Lincoln before his inauguration in March 1861. Jones arrived in Springfield on Christmas Day with letters of recommendation from two of his most recent clients, Ohio Governor Salmon P. Chase and Thomas Ewing (General William T. Sherman's father-in-law). Lincoln consented to sit for Thomas Dow Jones and gave him permission to sculpt the president-elect's likeness at the St. Nicholas Hotel in Springfield, Illinois until Lincoln's inauguration.99 Thomas Dow Jones' original 1861 bust was re-sculpted (by the artist) into marble as part of the Lincoln-Vicksburg Monument that was installed in the Ohio Statehouse in 1871.100

In its time at the Indiana Statehouse, Lincoln's bust has been moved to a number of niches around the rotunda. In 1943, it was located in the southeast corner pier facing east. In 1964, Lincoln's bust was moved again to the west side of the rotunda to allow Governor Henry F. Schricker’s bust to be placed in a more prominent position facing the east door. The bust currently occupies the exterior northeast niche of the rotunda.

Thomas Dow Jones started his career as an apprentice stonecutter and mason alongside his father in Ohio. In 1841, he traveled to Cincinnati to answer an ad for a proposal to build the Panama Canal. The proposal fell through, and Jones turned to sculpting grave monuments and, later, portrait busts. He received many commissions for portrait busts of prominent individuals such as Chief Justice Salmon P. Chase, statesman Henry Clay, and General Winfield Scott, and eventually opened a studio on Broadway in New York in 1851. Thomas Dow Jones was a member of the National Academy of Design, where he exhibited his work from 1853 to 1856.101