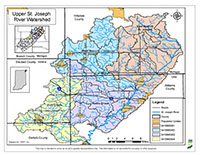 The St. Joseph River Watershed Initiative Partnership (Initiative) recognized the impact a WMP would have on a community and the water quality of a watershed and began writing WMPs in 1999, with the first, the greater St. Joseph River Watershed (Hydrologic Unit Code (HUC) 04100003) being approved by IDEM in 2001. Since the St. Joseph River WMP includes such a large area, crossing state lines into Ohio and Michigan, it was difficult to find specific areas of concern in each of the subwatersheds located within HUC 04100003. Consequently, Goal #1 of the greater St. Joseph River WMP is “By 2020, organize stakeholders and produce watershed plans for the HUC-11 subwatersheds which have not yet been completed…” Note that HUCs were converted to 10- and 12-digit scales nationwide in 2008. Therefore, the Initiative’s goal for HUC-11 subwatersheds would now be referred to as HUC-10 subwatersheds.