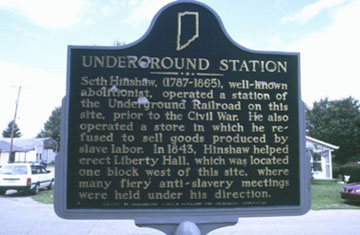 Seth Hinshaw, (1787-1865), well-known abolitionist, operated a station of the Underground Railroad on this site, prior to the Civil War. He also operated a store in which he refused to sell goods produced by slave labor. In 1843, Hinshaw helped erect Liberty Hall, which was located one block west of this site, where many fiery anti-slavery meetings were held under his direction.