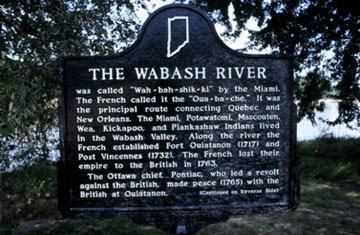 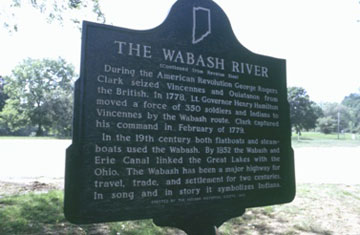 Erected by the Indiana Historical Society 1973. THIS MARKER IS MISSING.

was called "Wah-bah-shik-ki" by the Miami. The French called it the "Oua-ba-che." It was the principal route connecting Quebec and New Orleans. The Miami, Potawatomi, Mascouten, Wea, Kickapoo, and Piankashaw Indians lived in the Wabash Valley. Along the river the French established Fort Ouiatanon (1717) and Post Vincennes (1732). The French lost their empire to the British in 1763. The Ottawa chief, Pontiac, who led a revolt against the British, made peace (1765) with the British at Ouiatanon.

During the American Revolution George Rogers Clark seized Vincennes and Ouiatanon from the British. In 1778, Lt. Governor Henry Hamilton moved a force of 350 soldiers and Indians to Vincennes by the Wabash route. Clark captured his command in February of 1779. In the 19th century both flatboats and steamboats used the Wabash. By 1852 the Wabash and Erie Canal linked the Great Lakes with the Ohio. The Wabash has been a major highway for travel, trade, and settlement for two centuries. In song and in story it symbolizes Indiana.