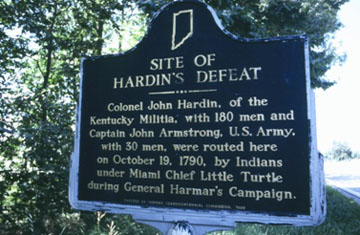 Location: This marker was damaged and removed.  It will not be replaced due to text inaccuracies (see Review below).

Reviewed: 2010.  Read the Review.  Learn more about our Accuracy of Marker Texts Policy.

Colonel John Hardin, of the Kentucky Militia, with 180 men and Captain John Armstrong, U.S. Army, with 30 men, were routed here on October 19, 1790, by Indians under Miami Chief Little Turtle during General Harmar's Campaign.