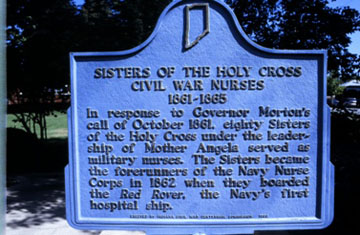 In response to Governor Morton's call of October 1861, eighty Sisters of the Holy Cross under the leadership of Mother Angela served as military nurses. The Sisters became the forerunners of the Navy Nurse Corps in 1862 when they boarded the Red Rover, the Navy's first hospital ship.