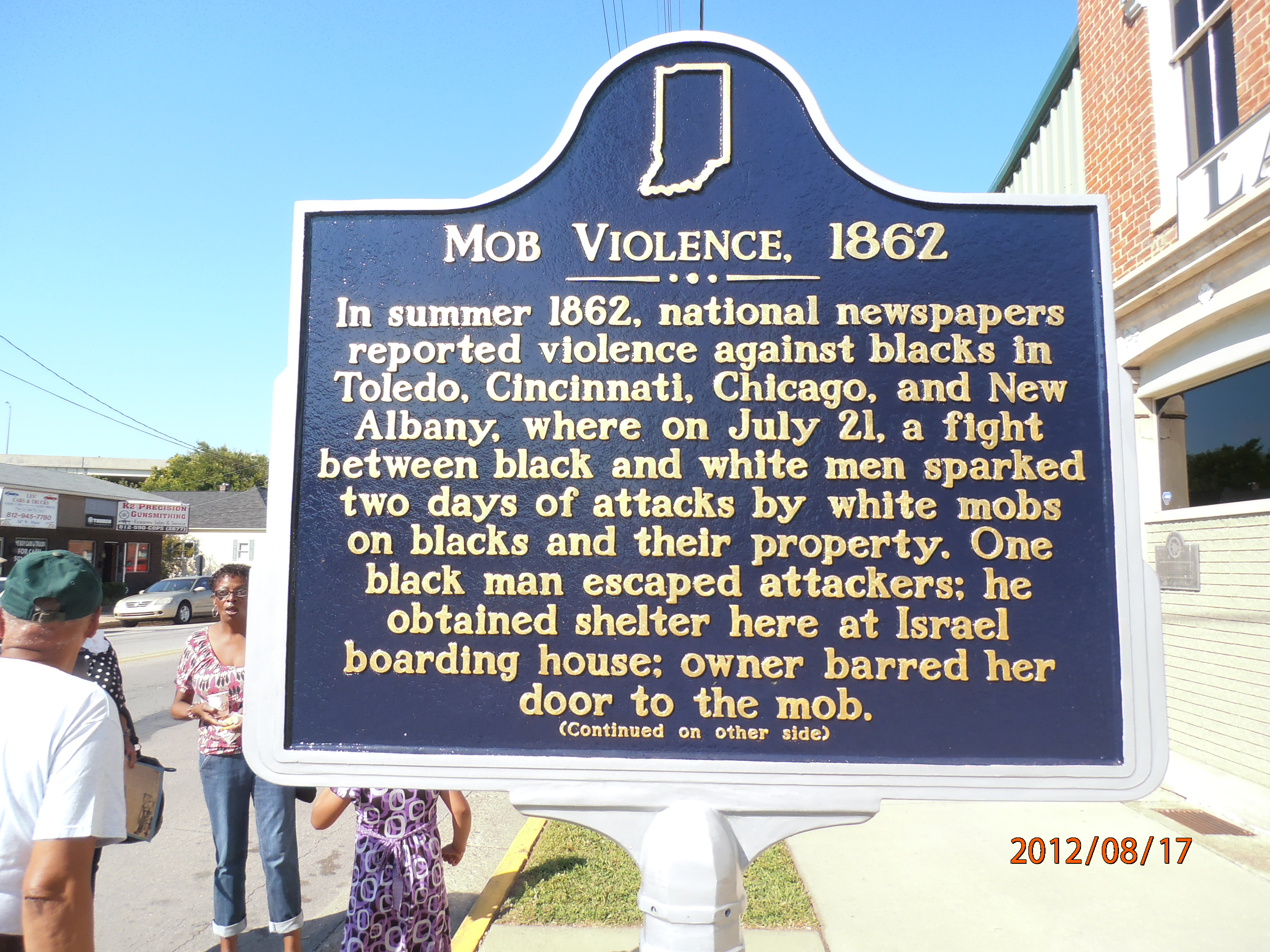 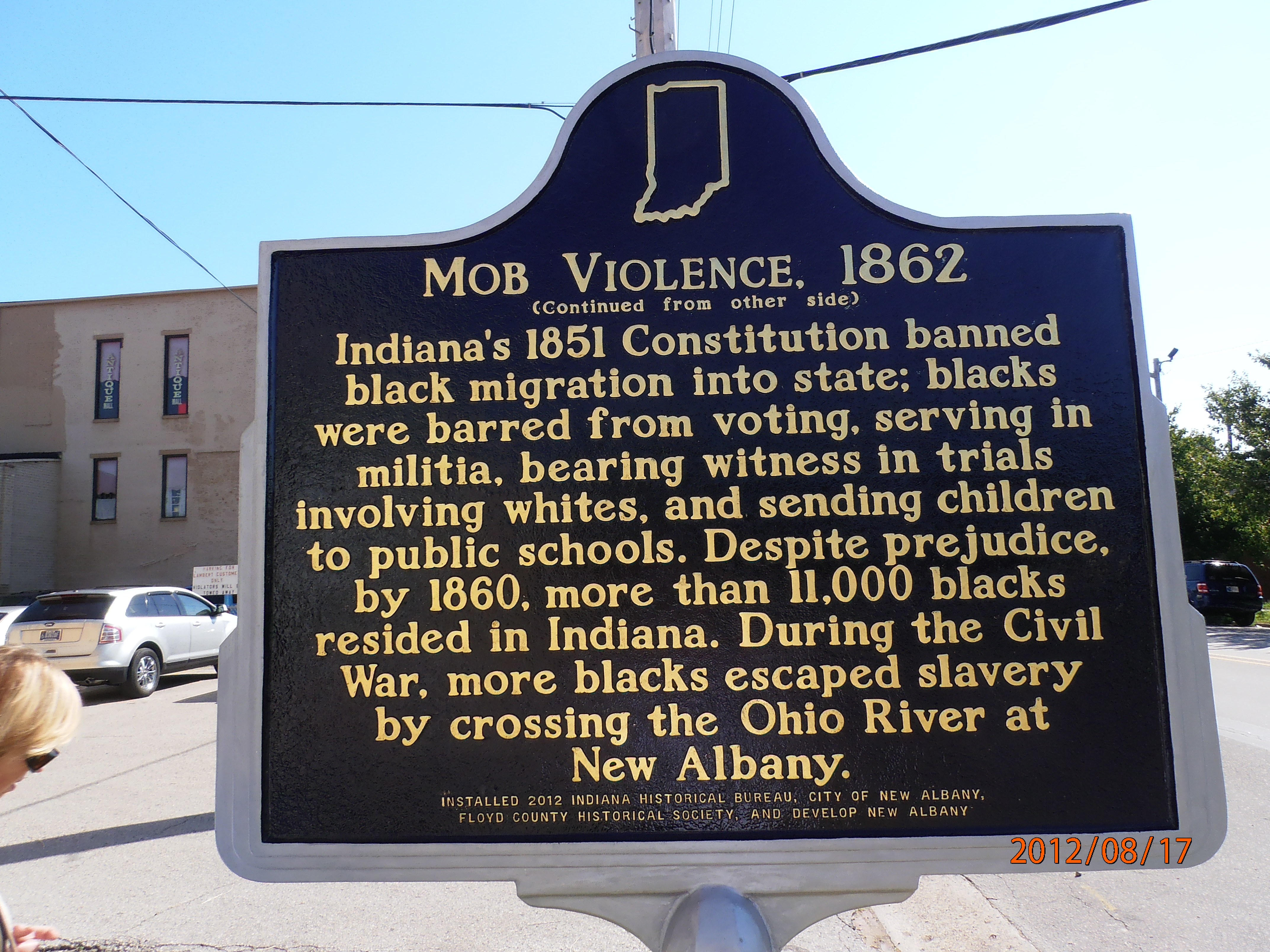 In summer 1862, national newspapers reported violence against blacks in Toledo, Cincinnati, Chicago, and New Albany, i where July 21, a fight between black and white menii sparked two days of attacks by white mobs on blacks and their property.iii One black man escaped attackers; he obtained shelter here at Israel boarding house; owner barred her door to the mob.iv

Indiana's 1851 Constitution banned black migration into state;v blacks were barred from voting, serving in militia, bearing witness in trials involving whites, and sending children to public schools.vi Despite prejudice, by 1860, more that 11,000 blacks resided in Indiana.vii During the Civil War, more blacks escaped slavery by crossing the Ohio River at New Albany.viii

When the Civil War began in April 1861, communities in Ohio, Indiana, Illinois, and Kentucky along the Ohio River boundary between the free and slave states pledged to work together to maintain good relations due to the interdependence of the economies all along the river. Kentucky adopted neutrality at the war's start but elected to join the Union when Confederate forces invaded Kentucky in September 1861. As the progress of the war provided enslaved blacks throughout the South with opportunities to free themselves, to be freed, and to migrate to free states, northern white workers began to feel threatened by the black laborers looking for employment. In the summer of 1862, white workers in some Midwestern cities perpetrated a number of violent attacks against black residents.

The New Albany Daily Ledger, July 11, 12, and 17, 1862 reported a series of attacks against blacks in Cincinnati, Toledo, and Chicago. For example, on July 10, in Cincinnati, "a gang or mob of Irish attacked the negro laborers employed in loading the steamer Aurora. . . ." National newspapers reported these attacks and the mob violence in New Albany. In August, 1862, attacks occurred in Brooklyn and, again in Chicago.

The New York Times , August 5, 1862 suggested that newspapers in the West opposed to the war were promoting the violence. The New Albany Daily Ledger, of July 12, claimed that the violence was the result of the "policy of the abolitionists and negro-worshippers." The paper predicted that attacks would continue "as long as the radicals attempt to throw four million 'contrabands' up in the North and West as free and equal men, to overrun towns and cities." The Southern Cultivator (August, Ga.), September/October 1862, reported, "The Ohio and Indiana papers state that there is a feeling of deadly hostility growing up among the free white ladorers [sic] against the 'contrabands.' who are swarming to the river towns by thousands. Collisions and riots have already occurred at Cincinnati and other points, and much trouble is feared."

The July 1862 violent incidents in New Albany are explained in footnote 2 below.

On July 22, 1862, the New Albany Daily Ledger, reported this incident: "Aggravated Murder Last Night--One White Man Killed and Another Badly Wounded by a Negro." The "badly wounded" man, Charles Lansford, gave a statement to the newspaper which is summarized here: about 9:30 Monday night July 21, Lansford, John Locke, and two other young white men between the ages of 18 and 20 were standing at a street corner talking when two "negroes" smoking cigars passed nearby. One of the young white men made a comment about the black passersby "putting on a good deal of style" that was meant to be heard only by the white men. The blacks walked on down the street, then turned and fired two shots-wounding Lansford and killing Locke. One of the white men fired back at the blacks as they ran away.

The Ledger blamed the "contrabands": "The number of colored persons whose lawful home is in this city is not large, and we do not believe, as a general thing, they are vicious. There are a number of negroes here, however,--who do not belong here; who are in the State in violation of law. These can be removed peaceably and effectually, without a resort to violence, and this should be done."

Several arrests were made in conjunction with shooting on July 21 but by July 29, the marshal had determined that the main suspect was William Johnson, a river barber, working on the steamboat B. J. Adams. Johnson was arrested and jailed despite the New Albany Daily Ledger's July 30 announcement that "information has been received which renders it exceedingly doubtful whether Bill Johnson, the negro arrested on the Adams, is the man who shot Locke and Lansford. The probability is, indeed, that he is not." Three months later, New Albany Daily Ledger, November 1, 1862, reported: "Did Not Find a Bill.--William Johnson arrested for shooting Locke some time since, and who has been confined in jail for several weeks, was this morning discharged from custody. The Grand Jury, after the fullest investigation of the case, could find no evidence whatever upon which to find an indictment. Great injustice has no doubt been done Johnson, but he now stands fully vindicated from the fearful charge preferred against him."

Soon after the shooting, the New Albany paper reported beatings of blacks and destruction of their property, armed soldiers patrolling the city, and crowds threatening to break into the jail to get to blacks confined there. The violence lasted for about 30 hours. Later stories corrected earlier reports of deaths of blacks and assaults on women and children. No arrests of mob leaders were reported.

Papers published elsewhere offered different perspectives. The Cincinnati Daily Gazette printed a letter from a New Albany resident who witnessed one of the beatings. He also reported: "Helpless women and children were menaced and set upon in various places." And ". . . so far as known not an arrest of one of the mob has been made by our officers." The Independent, August 7, 1862, reported: "Rowdies of New Albany, Indiana, have imitated the bad example of Cincinnati, and stirred up riotous proceedings against the negroes of the place. Three rowdies began the trouble by attacking two negroes; one of the latter shot one rowdy and wounded another; and next day a mob rose, one negro was shot and others wounded, and further violence is feared. . . ."

To date, Bureau staff has not located primary sources that report the numbers of blacks injured or killed or describe the extent of destruction to their property.

The New Albany Daily Ledger reported, "A negro who lives at the Israel House was attacked and shockingly pounded, but escaped and took refuge in the house. The mob pursued him, but Mrs. Israel barred the doors and refused to admit the crowd." A witness told the Cincinnati Gazette about the attacks, "Some begged to be permitted to hide in dwellings, and others, as I was told, piteously pleaded to lie sheltered from their cruel fate by being locked in jail. But in all these cases, so far as known, but one found protection in this way."

The 1860 U. S. Census, New Albany Ward 4, Floyd Co., Indiana lists Mary A. Israel, 50 years old, born in Virginia; her occupation is "Hotel Keeper" and fifteen other individuals including three servants are named as residents of the hotel. The 1870 Census lists MaryIsrael as a "Boarding house keeper" with four boarders and a cook in residence. She owned real estate valued at $18,000.

On August 4, 1862, New Albany Daily Ledger reported, "There has been a perfect exodus of negroes from this city, especially the males. The recent riotous proceedings in this city have had the effect to create a perfect panic among the negroes, and every one who can do so is leaving the city. Some thirty families, we are informed, have left so far and a large number of young persons who are engaged upon the river, but have made this city their homes, have changed their residences to Kentucky. They fly to a slave State to enjoy that liberty and security which is denied them in a free State, and this is one of the legitimate, the inevitable results of the efforts of the abolitionists for an equality of the races."

The debate about the place of slavery in the United States gradually expanded from the congregations of a few anti-slavery protestant denominations into the national political arena. In 1851, Indiana's newly adopted state constitution continued the legal prohibition of slavery in the state, but Article XIII of that document expressed the opinions of an overwhelming majority of of Indiana voters toward African Americans. Article XIII stated, "No negro or mulatto shall come into or settle in the State, after the adoption of this Constitution." It also provided that all fines collected for violations of this law be used to encourage and aid blacks living in Indiana to emigrate to Liberia and elsewhere.

The 1787 Northwest Ordinance prohibited slavery in the territory north and west of the Ohio River including the area that became Indiana. However, small numbers of enslaved African Americans and American Indians had been brought to this area by French traders and Catholic missions before the American Revolution. After the Revolution, American citizens began to migrate to the Old Northwest bringing their slaves with them. In 1800, Indiana Territory was established and the Territorial Assembly tried to establish legal slavery in the territory. When that failed, the Territorial government enacted laws allowing citizens to keep blacks in involuntary indentured servitude.

In 1816, Indiana obtained statehood; the State Constitution prohibited slavery in the new state. However, no provision was made to free the blacks still held in slavery and involuntary servitude. This Constitution also prohibited blacks from voting or serving in the Indiana militia. After statehood, Indiana's population grew rapidly; it included a growing population of free African Americans wishing to live and work in a "free state."

However, Indiana's black residents did not enjoy the same rights and privileges as its white residents. In the years after statehood, leading up to the Civil War, the Indiana General Assembly passed laws that prohibited marriage between black and white residents, prevented blacks from serving as witnesses against whites in a court of law, and, prohibited attendance of black children at public schools.

Indiana claimed its place as a "free state" in the North but its laws clearly demonstrated the voters' animosity and prejudice toward African Americans.

Indiana historian Emma Lou Thornbrough found that during the Civil War, the strongest pro-slavery, anti-black sentiments in Indiana were among the residents of the river towns along the Ohio River. Despite these feelings and the violence they sometimes provoked, the migration of freed black men, women, and children increased after the announcement, September 22, 1862, of the preliminary Emancipation Proclamation. Responding to the freedmen's needs for work, food, and shelter, some Hoosiers formed freedmen's aid societies. Indianapolis banker Calvin Fletcher wrote in his diary, November 21, 1864: ". . . went to Freedmens aid meeting. Subscribed $100 to the the Freedmen or fugitives from Slavery who have arrived here very destitute. . . . We hired a quaker to take the field & help the newcomers. Revd. W. Revels of the M.E. Colered Church is very active to releve these people."

On the day of the mob attacks (July 22, 1862) in New Albany, the Daily Ledger reported: "To-day a long line of four horse wagons conveyed through the city a large number of contrabands. They were conducted to a new asylum provided for them in the northern suburbs of the city; but it should be borne in mind by the people that for every contraband that is employed in the army upon wages, the Government has to support something like a half dozen women, children, and old and infirm persons. . . ." The October 20, 1862 New Albany Daily Ledger informed readers that between "ten or twelve negroes have been sent or brought to this city by officers and others connected with the army." On October 25 and again on November 10, 1862, the New Albany Daily Ledger reminded the local civil authorities that they should enforce the state law forbidding blacks from coming into the state.