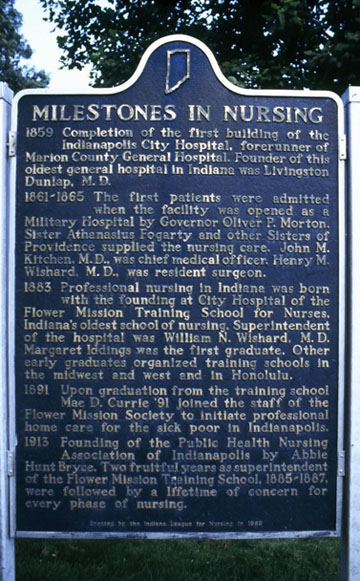 Erected by the Indiana League for Nursing in 1968

1859 Completion of the first building of the Indianapolis City Hospital, forerunner of Marion County General Hospital. Founder of this oldest general hospital in Indiana was Livingston Dunlap, M.D.

1861-1865 The first patients were admitted when the facility was opened as a Military Hospital by Governor Oliver P. Morton. Sister Athanasius Fogarty and other Sisters of Providence supplied the nursing care. John M. Kitchen, M.D., was chief medical officer. Henry M. Wishard, M.D., was resident surgeon.

1883 Professional nursing in Indiana was born with founding at City Hospital of the Flower Mission Training School for Nurses, Indiana's oldest school of nursing. Superintendent of the hospital was William N. Wishard, M.D. Margaret Iddings was the first graduate. Other early graduates organized training schools in the midwest and west and in Honolulu.

1891 Upon graduation from the training school Mae D. Currie '91 joined the staff of the Flower Mission Society to initiate professional home care for the sick poor in Indianapolis.

1913 Founding of the Public Health Nursing Association of Indianapolis by Abbie Hunt Bryce. Two fruitful years as superintendent of the Flower Mission Training School, 1885-1887, were followed by a lifetime of concern for every phase of nursing.