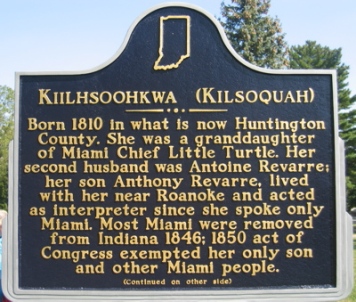 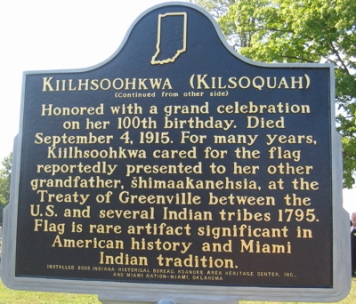 Born 1810 in what is now Huntington County. She was a granddaughter of Miami Chief Little Turtle. Her second husband was Antoine Revarre; her son Anthony Revarre, lived with her near Roanoke and acted as interpreter since she spoke only Miami. Most Miami were removed from Indiana 1846; 1850 act of Congress exempted her only son and other Miami people.

Honored with a grand celebration on her 100th birthday. Died September 4, 1915. For many years, Kiilhsoohkwa cared for the flag reportedly presented to her other grandfather, shimaakanehsia, at the Treaty of Greenville between the U.S. and several Indian tribes 1795. Flag is rare artifact significant in American history and Miami Indian tradition.

Born 1810 in what is now Huntington County. She was a granddaughter of Miami Chief Little Turtle.(2) Her second husband was Antoine Revarre;(3) her son Anthony Revarre, lived with her near Roanoke(4) and acted as interpreter since she spoke only Miami(5) Most Miami were removed from Indiana 1846, (6) but an 1850 act of Congress exempted her only son.(7)

Honored with a grand celebration on her 100th birthday.(8) Died September 4, 1915.(9) For many years, Kiilhsoohkwa cared for the flag reportedly presented to her other grandfather, shimaakanehsia, at the Treaty of Greenville between the U.S. and several Indian tribes 1795.(10) Flag is rare artifact significant in American history and Miami Indian tradition.(11)

(1) Since the Miami did not have a written language, their European and American contacts spelled Miami words as they heard them. Today linguists are attempting to render the spellings to reproduce the way the Miamis would have spoken the word.

Michael McCafferty, a linguist at Indiana University-Bloomington, suggests "Kiilhsoohkwa, " meaning "sun-woman, " would be a more appropriate spelling for the name. He explains that the "Miami-Illinois language has sounds that speakers of English and French don't register as meaningful." There are distinctions between short and long vowels. Some consonants are plain and some aspirated. Michael McCafferty, e-mail, September 4, 2004.

Julie Olds, the Cultural Preservation Officer for the Miami Nation of Oklahoma, notes that "kiilhsoohkwa" is the most appropriate spelling based on the Miami's spelling system, whereas "Kilsoquah, " which appears frequently in older records, represents the written translations of agents and interpreters. Julie Olds to Kate Hoffman, e-mail, March 21, 2005.

(2) Kaler and Maring, 80, Interview of Kilsoquah (with her son as interpreter) August 3, 1906 by M. L. Galbreath, John F. Mossman, Alexander More, and one of the authors. "The following was what was told by her: 'My name is Kil-so-quah. In American language I am Mrs. Anthony Revarre. I was born near Markle, in Huntington county, in May, 1810.'"

Dr. Perry G. Moore Affidavit, August 30, 1923, last page: "She was born at what is known as the Forks of the Wabash, near Huntington, May (day not known) 1810. . . . The foregoing items were all given me by Kil-so-quah herself." Indiana Historical Bureau property file.

Most secondary sources give her birthplace as the Forks of the Wabash.

In Kaler and Maring, 81 Kilsoquah refers to her son as "My son, Anthony Revarre, Jr., who lives with me." No other source located uses "Jr."

(5) Moore Affidavit, regarding knowledge he obtained from Mrs. Dixon and Kilsoquah, both from Huntington County and both granddaughters of Shimaakaneehsia, between circa 1868 and 1887 leading to his understanding of the circumstances of the history of the Greenville Treaty flag, which was given to the Indiana Historical Bureau.

(7) On May 1, 1850 Congress passed a joint resolution to extend exemption from removal to additional Miami who held treaty reserves in Indiana and their descendants. Included were "Young Revoir alias Shap-pe-ne-maw, and the Longlois.' This joint resolution extended the provisions of a joint resolution for the Benefit of Frances Slocum, March 3, 1845. Statutes at Large, 31st Congress, 1st Session, Resolution No. 6 accessed August 30, 2004. See also Rafert, 124.

(8) The Indianapolis Star, July 5, 1910, reported the events of her one hundredth birthday celebration on July 4: "Noted Indiana Squaw Holds All-Day Reception at Hundredth Birthday Celebration"; "Today's big celebration in honor of her centennial birthday anniversary at Roanoke, east of here, became in reality a continuous reception held by her"; "In the big automobile with her was a committee of ladies, headed by Mrs. Koontz, wife of Dr. S. Koontz, originator of the plan for the celebration"; Events of the day included: High Mass by Father Fessler(?) of Roanoke, Rev. Father McGoogan of Arcola, Battery B, Indiana National Guard (from Ft. Wayne?), Judge Ellison of Ft. Wayne, principal speech on Chief Little Turtle, speech by Woodson Marshall of Marion.

The obituary of Kilsoquah in the Indianapolis News, September 5, 1915 states: "But until rheumatism kept her indoors, each spring her birthday was celebrated by great gatherings, and from the platform on which the Indian princess sat speeches were made, and she smilingly and calmly received the applause of hundreds."

(11) Ray Gonyea, curator for Native American art and Culture, Eiteljorg Museum, believes that the sewing technique of the flag indicates that it was made by native women. Ribbon applique technique was becoming popular around 1795, and they used the shingle technique. It is interesting that the color sequence is blue/white/red, which is the French Tricolor sequence. The Indians had a close relationship with the French. The leather strip in the flag's side is brain-tanned deerskin, more evidence that it is Indian made. If a soldier had made the flag, the technique would have been different. He suggests that there must have been more flags, but this is the only one he knows of that has survived. Gonyea indicated that there is another Miami version of acquiring the flag: the Miami captured the flag when they beat Anthony Wayne in battle at a small creek where they made peace. Interview with Gonyea, October 20, 2004 .

Additional Miami tribal traditions about the Anthony Wayne flag are related in Stewart Rafert, "Anakapia â€˜Our Protector' of the Treaty of Greenville, " Traces of Indiana and Midwestern History, Spring 1997, 34-39.