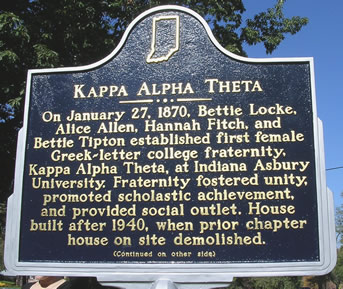 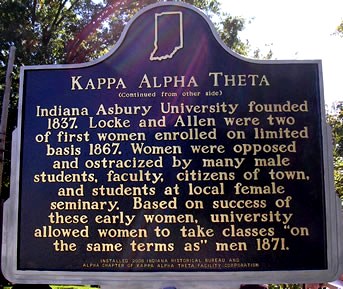 Indiana Asbury University founded 1837. Locke and Allen were two of first women enrolled on limited basis 1867. Women were opposed and ostracized by many male students, faculty, citizens of town, and students at local female seminary. Based on success of these early women, university allowed women to take classes "on the same terms as" men 1871.

Indiana Asbury University founded 1837.(4) Locke and Allen were two of first women enrolled on limited basis 1867.(5) Women were opposed and ostracized by many male students, faculty, citizens of town, and students at local female seminary.(6) Based on success of these early women, university allowed women to take classes "on the same terms as" men 1871.(7)

The immediate impetus for the creation of the female fraternity was that Locke had been denied admission into a men's fraternity. According to Neiswanger:

The fraternity continued to grow in Indiana as chapters opened at several universities, including Indiana University and Purdue University. Over the next few years, chapters opened throughout the United States. Dodge, Sixty Years, 191-202. (B00640) Today there are 120 chapters throughout the United States and Canada, with over 170, 000 initiated members. Kappa Alpha Theta Web site at kappaalphatheta.org (accessed 6/20/05). (B00642)

(2) In particular the fraternity stressed composition, debate, elocution, and social etiquette. Neiswanger, "The First Coeds" (B00648) Neiswanger notes that the need for unity and for a social outlet were especially important because these "young ladies were entirely shut out of that intangible something which is college life. The third floor halls of the Literary Societies, the centers of extracurricular activities, were sacrosanct precincts, the men's last sanctuary." Neiswanger, "The First Coeds"(B00648); Turk, Bound by a Mighty Vow, 20-24, 30, 37, 39. (B00641)

Diana Turk contends that one of the primary reasons the school opened its doors to women was because the drop in enrollment during the civil war meant contributed to financial difficulties for the school. The board thus voted to allow women to enroll on a limited basis. Turk, Bound by a Mighty Vow, 16. (B00641)

Following is a list of early female schools opened in Greencastle:

During this time there was an ongoing debate over the education of females. Many in society saw higher education as unfeminine and females as unable to meet the physical and mental demands of college. An example of this perspective is from The Reverend John Todd:

We want to put our daughters at school at six, and have their education completed at eighteen. A girl would feel mortified not to be through schooling by the time she reaches that age. In these years the poor things has her brain crowded with history, grammar, arithmetic, geography, natural history, chemistry, physiology, botany, astronomy, rhetoric, natural and moral philosophy, metaphysics, French, often German, Latin, perhaps Greek, reading spelling, committing poetry, writing compositions, drawing, painting, c., ad infinitum. Then out of school hours, from three to six hours of severe toil at the piano. She must be on the strain all the school hours, study in the evening till her eyes ache, her brain whirls, her spine yields and gives way, and she comes through the process of education enervated, feeble, without courage or vigor, elasticity or strength.

(6)The Greencastle Banner published excerpts from Locke's commencement speech, entitled "Popular Prejudices." In the speech Lock describes her experiences and feelings regarding her time at Asbury. She remarks, '. . . she who seeks an education in one of these institutions [male colleges], must expect to pay a heavy tax on her privileges during the existing state of popular sentiment. The prejudice in the community against the attendance of girls in male colleges is to be encountered; the untiring opposition of many of the male students is to be met, for here, as elsewhere, 'Envy dogs success and every victor's crown is lined with thorns, and worn amid scoffs.' The ever present consciousness 'I am not welcome in this building;' the apprehension, 'When I come to receive my diploma, the alumni will scarcely recognize me as a sister alumna'-all this to be endured.' "Female Education, " Greencastle Banner, June 29, 1871, emphasis in original. (B00669)

As Lilian Hughes Neiswanger noted, "Everyone seemed against them, even their own sex. The hardest thing to bear in that bitter period, one of them said later, was the attitude of other girls of their own age. On the way home from classes, the college girls would meet the seminary ladies and be neatly snubbed by them. This snobbish ostracism by their former friends brought tears at night that no amount of antagonism from the young men could provoke." Neiswanger, "The First Coeds." (B00648)

(7)On June 21, 1871, a meeting of the Joint Board of Trustees and Visitors decided that "the admission of females to the regular classes" would be a measure of "both practicability and desirableness." The Board also adopted the recommendation of the faculty, to open "Preparatory classes to females on the same terms as the males." "Asbury University and Female Education, " Greencastle Banner, June 29, 1871. (B00675)

In 1867 women were admitted to Asbury on a limited basis. They could take regular college courses, or the "Classical Course." This was a four-year program that provided a general liberal education earning a Bachelor of Arts degree. "The Classical Course, is . . . a thorough, liberal education . . . The Bachelor of Arts is conferred upon those who satisfactorily complete this Course. The Scientific Course . . .covers four years, and embraces, besides scientific branches, two years in Latin, and also the German and French . . . The Degree of Bachelor of Science is conferred to those to satisfactorily complete this Course." Annual Catalogue of the Indiana Asbury University for 1867-68 (Indianapolis, 1868), 16-17. (B00677)

On the following day, June 22, Locke, Allen, Beswick and Simmons became the first females to graduate from Asbury. Annual Catalogue, 1871-72. (B00679)