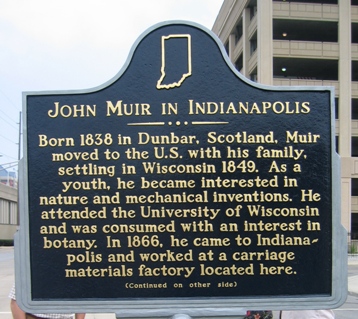 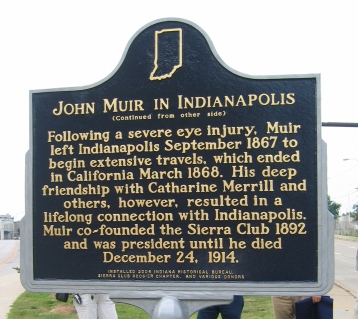 Born 1838 in Dunbar, Scotland, Muir moved to the U.S. with his family, settling in Wisconsin 1849. As a youth, he became interested in nature and mechanical inventions. He attended the University of Wisconsin and was consumed with an interest in botany. In 1866, he came to Indianapolis and worked at a carriage materials factory located here.

Following a severe eye injury, Muir left Indianapolis September 1867 to begin extensive travels, which ended in California March 1868. His deep friendship with Catharine Merrill and others, however, resulted in a lifelong connection with Indianapolis. Muir co-founded the Sierra Club 1892 and was president until he died December 24, 1914.

Born 1838 in Dunbar, Scotland, (1) Muir moved to the U.S. with his family, settling in Wisconsin 1849.(2) As a youth, he became interested in nature(3) and mechanical inventions.(4) He attended the University of Wisconsin(5) and was consumed with an interest in botany.(6) In 1866, he came to Indianapolis(7) and worked at a carriage materials factory located here.(8)

Following a severe eye injury, (9) Muir left Indianapolis September 1867(10) to begin extensive travels, which ended in California March 1868.(11) His deep friendship with Catharine Merrill(12) and others, however, resulted in a lifelong connection with Indianapolis.(13) Muir co-founded the Sierra Club 1892 and was president until he died December 24, 1914.(14)

(5)Muir apparently attended the University for about two and one half years, although Muir says he attended for four years. Muir, The Story of My Boyhood and Youth, 1:218-20; "Chronology, " Sierra Club Web site. In 1864, Muir had traveled to Canada and remained for two years until February 22, 1866 when the factory in Meaford, Ontario where he was working burned down. "Chronology, " Sierra Club Web site.

(7)Badè, Life and Letters, 1:152; "Chronology, " Sierra Club Web site. In an autobiographical narrative, Muir noted, "Looking over the map I saw that Indianapolis was an important railroad center and probably had manufactories of different sorts in which I could find employment, with the advantage of being in the heart of one of the very richest forest of deciduous hard wood trees on the continent." In Badè, Life and Letters, 1:153.

Muir boarded at 331 South Pennsylvania and was listed as a sawyer. Edward's Annual Directory of the Inhabitants in the City of Indianapolis, 1867 (Indianapolis, 1866), 327.

Osgood, Smith & Co., a hub and spoke manufacturer, was located at 230 South Illinois. Edwards Annual Directory in the City of Indianapolis for 1867 (Indianapolis, 1866), 335. In the mid-1860s J. R. Osgood and S.E. Smith established a business, which produced wagon and carriage materials on South Illinois Street. In 1870, with Jacob Woodburn of St. Louis, they incorporated the Woodburn Sarven Wheel Company. It became the largest manufacturer of the patented "Sarven Wheel" in the United States during the late nineteenth century. David J. Bodenhamer and Robert G. Barrows, eds. The Encyclopedia of Indianapolis (Bloomington & Indianapolis, 1994), 1451.

Muir later noted, "I greatly enjoyed this mechanical work, began to invent and introduce labor-saving improvements and was so successful that my botanical and geological studies were in danger of being seriously interrupted." Muir's employers had suggested a possible partnership in the business to which he replied ". . . that although I liked the inventive work and the earnest rush and roar and whirl of the factory, Nature's attractions were stronger and I must soon get away." In Badè, 1:153-54.

(9)The exact date of the eye injury is not known. Muir wrote that "While at work in a mill my right eye was pierced by a file, and then came the darkest time of my life. John Muir, "Words from an Old Friend, " in The Man Shakespeare And Other Essays With Impressions and Reminiscences of the Author by Melville B. Anderson, and With Some Words of Appreciation from John Muir, by Catharine Merrill (Indianapolis, 1902), 33. Muir elsewhere describes exactly what he was doing when the injury occurs. Muir, in Badè, 1:154. In an April 6, 1867 letter, he notes, "The eye is pierced just where the cornea meets the sclerotic coating. . . . Sight was completely gone from the injured eye for the first few days . . . but I was surprised to find that on the fourth or fifth day I could see a little with it. Sight continued to increase for a few days. . . .

I can see sufficiently well with it to avoid the furniture, etc., in walking through a room. Can almost, in full light, recognize some of my friends but cannot distinguish one letter from another of common type." Muir, Letters to a Friend, 17-18.

In a June 9, 1867 letter, Muir indicates that he plans to leave Indianapolis with Merrill Moores (the 11 year old nephew of Catharine Merrill) to botanize, in Decatur, Illinois and then north to Madison, Wisconsin. Muir, Letters to a Friend, 24-25. In August 1867, Muir returned to Indianapolis. Muir, ibid., 31.

(12)"Miss Merrill was the first friend I found in Indiana, and one of the kindest, wisest, and most helpful of my life. . . . . I was blind for months. . . . She. . . . procured the services of the best oculist and the children she knew I loved. And when at last after long months of kindness and skill she [Catharine Merrill] saw me out in Heaven's sunshine again, . . . her joy was as great as my own." Muir, "Words from an Old Friend, " 32-33; Samuel Merrill, "Personal Recollections, " 25.

Catharine Merrill, born 1824, was the daughter of State Treasurer, Samuel Merrill. She taught school in the back parlor of her home (57), was a nurse in the Civil War (306, 307), wrote The Indiana Soldier in the War of the Union (323), and was a professor at North Western Christian University (338). She was the aunt of Merrill Moores, who accompanied John Muir on some of his excursions (343, 344, 354). Katharine Merrill Graydon, collected and arranged, Catharine Merrill, Life and Letters (Greenfield, Ind.), 1934.

(13) There are communications to, from, and about Muir in Graydon, Catharine Merrill. One letter July 2, 1896 indicates that Muir visited with Catharine during a trip to Indianapolis. Badè discovered that Muir had left some of his belongings at the home of Julia M. Moores went he left Indianapolis on his thousand–mile walk. Badè traced the belongings to Moores' son's home in Indianapolis and found Muir's herbarium gathered 1864-1867, which gave important clues to Muir's travels 1864-1867. Badè, 1:117.

On February 5, 1880, Muir writes to Katharine Merrill Graydon: "I mean to come see you all in a year or two . . . to see you all in your new developments. The sweet underbrush of girls—Moores, Merrills, Graydons, etc.—was very refreshing and pleasant to me all my Indiana days. . . . Going to Indianapolis is one of the brightest of my hopes. It seems but yesterday since I left you all. . . . I will be so happy to see you again, not to renew my acquaintance, for that has not been for a moment interrupted but to know you better in your new growth." Badè, 2:128.

There are additional letters quoted in Badè, 2.

. . . a man able to influence contemporary thought and action on the subjects to which he had devoted his life. He was a great factor in influencing the thought of California and the thought of the entire country so as to secure the preservation of those great natural phenomena . . . which make California a veritable Garden of the Lord.