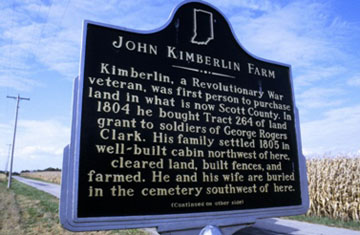 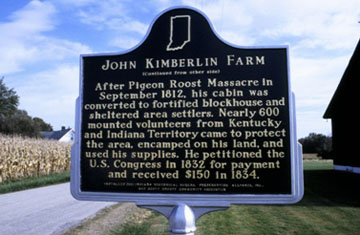 Kimberlin, a Revolutionary War veteran, was first person to purchase land in what is now Scott County. In 1804 he bought Tract 264 of land grant to soldiers of George Rogers Clark. His family settled 1805 in well-built cabin northwest of here, cleared land, built fences, and farmed. He and his wife are buried in the cemetery southwest of here.

After Pigeon Roost Massacre in September 1812, his cabin was converted to fortified blockhouse and sheltered area settlers. Nearly 600 mounted volunteers from Kentucky and Indiana Territory came to protect the area, encamped on his land, and used his supplies. He petitioned the U.S. Congress in 1832 for payment and received $150 in 1834.